Science Popularization of the Institute of Microbiology, Chinese Academy of Sciences: Why can’t antibiotics fight viruses?

At present, the novel coronavirus infection pneumonia epidemic has caused widespread concern. The public will also hear the news that “there is no specific medicine at present” while protecting themselves. Some people will ask about this. : What are the similarities and differences between viruses and bacteria? Why can’t it be treated with antibiotics? Why can’t antibiotics be used to kill the virus? 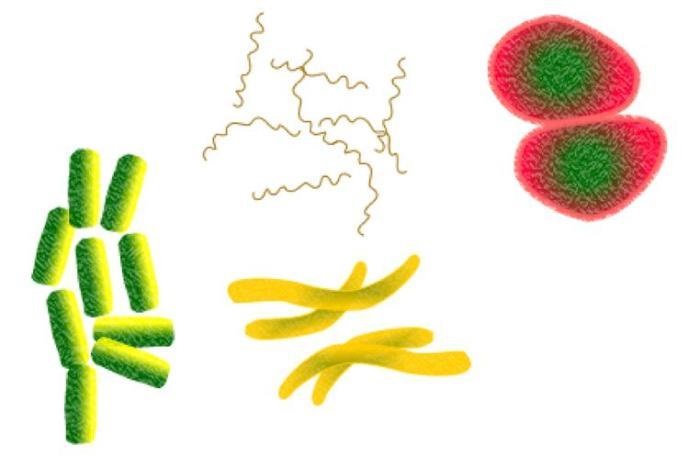 Bacteria and viruses are same tiny creatures on earth

Experts say that bacteria and viruses are both microorganisms. As the smallest life form on earth, people always ignore their existence, but it is this tiny creature that always has a “sense of existence”. Infected by them.

Bacteria are cells with cell walls, DNA, and organelles. They can produce and synthesize the enzymes needed for their own metabolism, and can divide and reproduce themselves. Viruses are much smaller than bacteria. Their main structure is protein capsid and internal genetic material (DNA or RNA), and viruses cannot replicate themselves. Viruses need to infect host cells to replicate their own genetic material, and then release more progeny viruses to infect other host cells.

Bacteria can be harmless or even beneficial to human health, and they can live independently. The purpose of a virus is to replicate itself, so it has no meaning if it does not infect the host. It can be described as the purest “selfish gene.”

The size difference between the two is about 1000 times

Experts from the Institute of Microbiology of the Chinese Academy of Sciences said that bacteria in a broad sense are prokaryotes. Although they are cell structures, they are still very different from human cell structures. They have simpler structures, no nuclei, and only the accumulation area of ​​DNA—nucleoids. Bacteria are generally spherical, rod-shaped, spiral-shaped, etc. People do not forget to add shape descriptions when naming it, such as Escherichia coli, Lactobacillus, Staphylococcus aureus, etc. (Yeast is a fungus, so the name No shape).

The smallest known bacteria are only 0.2 microns long, so they can only be seen under a microscope, while the largest bacteria in the world can be seen directly with the naked eye. It is 0.2-0.6 mm in size and is a kind of bacteria called Sulfophilus Namibia .

A virus is a non-cellular form composed of a nucleic acid molecule (DNA or RNA) and protein. It is an organic species between living and non-living organisms that live by parasitism. After it enters the cell, it exhibits DNA replication. Waiting for metabolism is indeed a feature of life, and after leaving the cell, it is just a lifeless crystal.

The diameter of most viruses is 10-300nm (nanometers). Some filoviruses can reach 1400nm in length, but their width is only about 80nm. Most viruses cannot be observed under an optical microscope, and scanning or transmission electron microscopes are the main tools to observe the morphology of virus particles. Compared with viruses and bacteria, the size difference between the two is about 1000 times.

Scientists say that there are many “good people” in bacteria. Among them, saprophytic bacteria are important decomposers in the ecosystem, so that the carbon cycle can proceed smoothly; some bacteria will fix nitrogen and convert nitrogen into a form of bioenergy utilization. The production of cheese, yogurt and fermented rice, the production of some antibiotics, and the treatment of wastewater are all related to bacteria. In the field of biotechnology, bacteria are also widely used. Of course, the “bad guys” in bacteria are many pathogenic bacteria, including tuberculosis, anthracnose, plague and other diseases are all caused by bacteria.

Bacteria and the human body are mainly parasitic. As far as pathogenic bacteria are concerned, since most bacteria have their own metabolic system, they can parasitize between normal human cells after they invade the human body. Bacteria deprive the body of essential nutrients; the growth of bacteria produces various metabolites that disrupt the physiological balance of the body; even the size of bacteria has become a pathogenic factor, interfering with and destroying the function of cells. Therefore, in some In disease, only the proliferation of bacteria can cause fatal consequences.

The virus invades the human body from a sneeze or a physical contact. Viruses need to be parasitic in living host cells, relying on the host cell to provide the raw material system, energy and place needed in the virus replication process. When a virus is ready to infect a host cell, it needs the following six steps to complete its proliferation activities, namely adsorption, invasion, uncoating, biosynthesis, assembly and release.

Adsorption: The virus “looks at” the target cell by recognizing the receptor protein molecules specific to the surface of the host cell membrane (for example, the new coronavirus recognizes the angiotensin converting enzyme 2-ACE2 on the cell surface of the human respiratory tract and lung); invasion: Then the virus either enters the host cell in some way (such as membrane fusion), or directly injects genetic material into the host cell; uncoating: then the viral infectious nucleic acid is released from the capsid; biosynthesis: “non-stop” Carry out biosynthesis on the ground—according to genetic instructions and using the raw materials, energy and places provided by the host cell to synthesize viral nucleic acids and proteins; assembly: newly synthesized viral nucleic acids and proteins will be assembled into progeny viruses; release: progeny viruses are released Outside the host cell.

The body’s defense and counterattack

Experts pointed out that both bacteria and viruses must break through the body’s defenses to complete the invasion, but the human body will eventually discover their existence. The human immune system has its own protective measures and early warning mechanisms.

The second line of defense: bactericidal substances and phagocytes. There are always bactericidal substances and phagocytes on the mucosal surface and inside the human body to “patrol” to prevent the invasion of pathogens. Take lysozyme as an example. It can destroy the cell wall of bacteria, cause the ruptured cell wall to escape and dissolve the bacteria. It can also directly bind to negatively charged viral proteins to form double salts with DNA, RNA, and apoproteins. Inactivate the virus. Therefore, the enzyme has antibacterial, anti-inflammatory and antiviral effects.

The third line of defense: specific immunity. When powerful pathogens broke through the first two lines of defense, the human body’s counterattack has just begun. Through the phagocytosis of phagocytes and the analysis of special immune cells (T cells), the human body produces antibodies that can specifically recognize invaders. Antibodies can make pathogens stick together and no longer be invasive, and eventually expose them to intercellular The pathogenic bacteria will be killed. But is the virus that invaded the cell safe? No! The human body can subtly recognize which cell is infected by the virus, and then send a “killer” to kill the infected cell, release the virus inside the cell for the antigen to destroy.

However, the human body’s counterattack takes time to prepare, and pathogens will invade and occupy the human body through such a time gap.

Bacterial infection was once the greatest enemy of mankind. For example, the plague was called the “Black Death” in Europe, and it reduced the population of Europe by one-third in three years; China now also lists plague and cholera as Class A infectious diseases.

Until the discovery and promotion of antibiotics, humans did not control the outbreak of bacterial infections.

Antibiotics mainly have a killing effect on bacteria. They can kill bacteria by destroying the structure of bacterial cells, such as cell walls, cell membranes, changing internal metabolism, hindering nucleic acid and protein synthesis, etc.

However, antibiotics are not effective against viruses, because bacteria and viruses have completely different structures.

Because bacteria have cell walls, as well as their own nucleic acid replication machinery and ribosomes, as long as antibiotics are designed for these targets, they can be guaranteed to kill bacteria and have little side effects on humans. However, the virus has no cell wall, no nuclease of its own, and no ribosome. All its functions rely on the host cell to complete, so antibiotics cannot kill the virus.

The ideal antiviral drug can act on one or several links of the virus proliferation cycle and interfere or block it without affecting the normal metabolism of the host cell. For example, the common drug ribavirin provides a large number of nucleotide analogs, which replaces the normal nucleotides, so that the virus loses the ability to replicate and inhibits virus amplification (but it also has great side effects on the human body). In addition, the anti-influenza drug oseltamivir works by blocking the release of progeny viruses.

In response to the COVID-19 epidemic, researchers from the Wuhan Institute of Virology of the Chinese Academy of Sciences and the Academy of Military Medical Sciences have also initially screened at the cellular level remidivir or lenticivir that has a good inhibitory effect on the new coronavirus (2019-nCoV) Remdesivir, GS-5734, anti-Ebola drug phase II clinical), chloroquine (Chloroquine, Sigma-C6628, antimalarial drug), ritonavir (Ritonavir, anti-HIV drug).

Scientists reminded that in the face of virus treatment, humans have never found a universal special medicine like antibiotics. Active treatment is to mobilize the body’s own immune ability to fight the virus, because only organisms themselves really know how to fight against organisms.