What are the common B cell markers​?

What are the common B cell markers​? Extensive research in mice and humans has identified unique B cell populations, each of which is important for understanding B cell biology. For each subset of cells, a corresponding set of protein markers for detection has been established. In this article, we reviewed the common B cell markers that have been discovered recently.

From birth, hematopoietic lymphocyte precursors will produce the B1 and B2 lineages of B cells. B1 cells originate from the liver of the fetus and exist in the periphery in a self-renewing form, with little contact with the bone marrow in adulthood. B1 cells produce a T-independent humoral response. According to reports, their phenotypes are CD20+, CD27+, CD43+, CD70- (in humans).

B2 cells follow a sequential developmental program in the bone marrow, where the B cell receptor (BCR) develops, and the central tolerance process selects suitable B cells.

In general, the developmental stage produces populations of Pro B, Pre B and immature B cells. The reported markers for these stages include CD22, IL7R, CD34, CD38, CD79 and MME. The B cells that complete this procedure enter the spleen during the transition phase (T1, T2, T3) and express CD19+, IgDlo/+, CD27-, CD24++, and CD38++.

B cells further differentiate into marginal zone (MZ) B cells or follicular (FO) B cells. MZ B cells in the spleen (approximately 20% of peripheral human B cells) express multi-reactive BCR and natural IgM antibodies, thereby achieving T-dependent and T-dependent responses. Important proteins expressed by MZ B cells include CD21 and CD1D. FO B cells are located in the lymph follicles of the spleen and lymph nodes and are the most important population of immune cells. After acquiring the antigen and interacting with follicular T cells, they proliferate in the germinal center (GC), resulting in the production of all antibody isotypes and high-affinity antibodies. Some of the proteins associated with B cells in GC include FAS, HLA-DR and BAFF-R (TNFRSF13C). 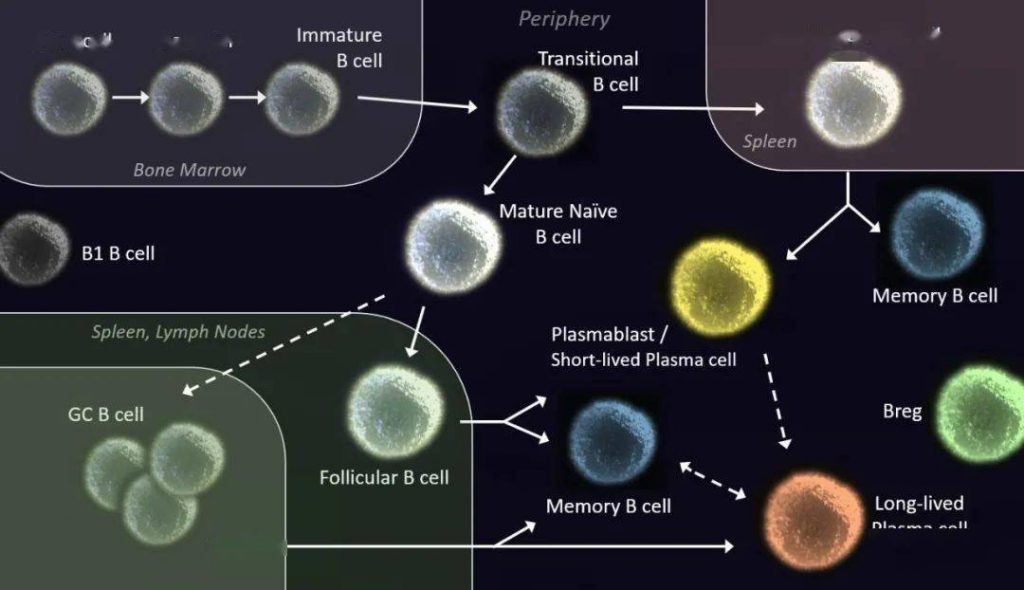 A summary of the main B cell subtypes, including an overview of their development and activation.

In order to efficiently produce antibodies, B cells will eventually differentiate from a naive state into plasmablasts and plasma cells that secrete antibodies. These mature but not activated naive B cells may have CD19+, IgD+, CD27-, CD38+/-, CD24+/- phenotypes.

Fibroblasts are proliferating, short-lived activated B cells that secrete antibodies during division. These mediators of the early antibody response can come from T-dependent and T-dependent activation. The plasmablast population can be derived from B1 cells, MZ B cells, FO B cells and memory cells, and can further mature into plasma cells.

Plasma cells are undivided, terminally differentiated B cells that have emerged from mature activated GC B cells. This population produces a large number of diverse antibodies with high affinity and class switching. They are long-lived and migrate to the bone marrow, where they survive with the support of stromal cells. Plasma cells and plasma cells express similar proteins, and may be identified by the surface marker phenotypes CD19+/–, IgD–, CD27++, CD38++, CD24– and the expression of transcription factors BLIMP1, XBP1 and IRF4. In addition, plasma cells express high levels of CD138 (SDC1).

B cell activation also produces a population of memory B cells (cells experienced by pathogens), which can be quickly reactivated to produce high-affinity antibodies. During the secondary immune response, this long-lived B cell subtype can differentiate back into GC B cells, plasmablasts and plasma cells.
Memory B cells can be classified by expressed immunoglobulin markers, such as IgM +, IgG +, IgA + and IgE + memory B cells. A typical phenotype has been proposed, CD19 +, CD27 +, CD38 +/-, CD24 +/-.

It has been discovered that a special type of B cells, called regulatory B cells (Bregs), can affect a variety of immune system processes, including suppressing inflammation. Bregs seems to be a functional classification, lacking a common phenotype, but capable of developing various B cells. Some established features include the production of anti-inflammatory cytokines IL-10 and IL-35, and the regulatory molecule PD-L1 (in mice). Other reported Breg markers include CD1D, CD24, CD5, CD44, CD38 and CD71 (TFRC).

The following table lists human genes (or proteins) that have been described as B cell markers in recent literature. Although most markers are proteins expressed on the cell surface, they also include other notable types, including transcription factors and cytokines. The list of relevant antibodies and ELISA kits is associated with each marker because these immunoassay tools are usually used for cell characterization studies by flow cytometry and immunostaining. These products come from various reagent suppliers and can be used as a convenient reference for B cell marker immunoassay.