Professor Zhang Yao introduced that vasoactive drugs are mainly used to improve blood pressure, cardiac output and microcirculation by regulating vasomotor state, regulating vascular function and improving microcirculation blood perfusion, so as to achieve the purpose of treatment (anti-shock). Vasoactive drugs are divided into 4 categories according to whether there is a “positive inotropic effect”, cardiac vasoconstrictor, cardiac vasodilator, vasoconstrictor and vasodilator.

Most vasodilators inhibit smooth muscle contraction by increasing intracellular cAMP or cGMP and reducing intracellular calcium ion concentration. Finally, nitric oxide is regulated. NO is an important cardiovascular messenger substance, synthesized by endothelial cells. It can reduce the release of norepinephrine from nerve endings, activate guanylate cyclase, and promote the formation of cGMP, thereby reducing the level of calcium ions in the cytoplasm and inhibiting smooth muscle contraction.

1. Vasodilators with no positive effect

Nitrate drugs need to be metabolized in smooth muscle cells by mitochondrial acetaldehyde dehydrogenase and cytochrome P450 enzymes in the endoplasmic reticulum before they can release NO; sodium nitroprusside can be directly degraded into nitrite after entering the blood. , NO can be produced in the blood without entering into smooth muscle cell metabolism. Based on the above two different sources of NO, the targets of the two drugs are different. The target of sodium nitroprusside is non-selective, large arteries, arterioles, veins, and capillaries can all be expanded; sodium nitroprusside can expand arterioles and easily cause coronary “theft”. However, nitrates have higher selectivity. NO can be released only in smooth muscles rich in acetaldehyde dehydrogenase such as veins. They have a poor effect in large arteries and have a certain effect in coronary arteries and large blood vessels, but in small Basically no NO is released in the arteries.

And Urapidil has a dual mechanism of action of the periphery and the center. Its peripheral function is mainly to block the postsynaptic membrane α1 receptor, which reduces the total peripheral vascular resistance and expands blood vessels; at the same time, it also has a mild α2 blocking the vasoconstrictor effect of catecholamines; the central action is mainly through the activation of serotonin 1A receptors , Reduce the sympathetic feedback regulation of the medulla oblongata cardiovascular center. Scope of application: It can be used for patients with hypertension combined with acute heart failure and aortic dissection combined with acute heart failure (recommended level: IIa class B).

Professor Zhang Yao introduced that most patients with heart failure are relatively/absolutely insufficient in BNP. Although BNP secretion is up-regulated in the decompensated phase of heart failure, there is still a serious absolute or relative deficiency compared with the body’s excessive stress response, and it is difficult to compensate for the rapidly deteriorating hemodynamic state. However, with the deepening of BNP research, people began to increase the concentration of BNP and exert its physiological activity to treat heart failure. Recombinant human brain natriuretic peptide (rhBNP) and endogenous brain natriuretic peptide have the same amino acid sequence, spatial structure and biological activity, so they have the same mechanism of action.

rhBNP is classified as a vasodilator (it can dilate veins, arteries, and coronary arteries, reduce anterior and afterload, and increase cardiac output), but it is not a pure vasodilator and has a variety of biological activities. The mode of administration is slow intravenous injection with a loading dose of 1.5-2µg/kg, followed by continuous intravenous infusion of 0.01µg/kg/min; it can also be infused directly without a loading dose (IIb, B).

The famous VMAC trial published on JAMA in 2002 is a prospective multi-center randomized double-blind trial, 55 clinical research units, 489 patients with heart failure, aged >65 years old, randomly divided into three groups: one group is based on In the treatment, brain natriuretic peptide (2μg/kg intravenous bolus, 0.01μg/kg/min intravenous drip) was added, the other group was treated with nitroglycerin, the third group was the control group, and only the basic treatment was used. The results of the study showed that, compared with nitroglycerin, brain natriuretic peptide significantly reduced pulmonary capillary wedge pressure and mean pulmonary artery pressure, suggesting that brain natriuretic peptide is better than nitroglycerin in improving left ventricular load in patients with heart failure.

Professor Zhang Yao emphasized that inotropic drugs still occupy an irreplaceable position in the field of HF treatment, especially in improving symptoms of hypotension and hypoperfusion AHF (including cardiogenic shock (CS)) and advanced HF (AdvHF) patients Significantly. However, inotropic drugs are also a “double-edged sword”, and the risk of adverse events caused by inotropic drugs should not be ignored. Therefore, during the application of inotropic drugs, blood pressure, heart rate, heart rhythm, hemodynamics, and changes in clinical status should be closely monitored, and should be stopped as soon as possible after the condition is stable.

It is worth noting that a number of studies have found that some positive inotropic drugs can not bring survival benefits to HF patients, but increase the short-term and long-term mortality risk of HF, which is closely related to the unreasonable use of drugs. Therefore, clinicians should pay special attention to the indications of inotropic drugs. The current indications include, suitable for patients with hypotension (systolic pressure <90mmHg) and/or hypoperfusion of tissues and organs (IIb, C). Short-term intravenous use of inotropic drugs can increase cardiac output, raise blood pressure, relieve tissue hypoperfusion, and maintain important organ functions.

Then, Professor Zhang Yao introduced several clinical trials of inotropic drugs. Among them, the ROSE AHF study found that patients with HFrEF with renal insufficiency are more responsive to dopamine. ROSE AHF included AHF patients with renal insufficiency (n = 360; any EF value). The primary endpoints were cumulative urine output and changes in serum cystatin-C within 72 hours.

Professor Zhang Yao pointed out that whether to combine drugs with vasodilator effects is the focus of clinical research. According to the data of three AHF registration studies, there are 988 cardiogenic shock patients with ALARMHF, EFICA and AHEAD. Comparison of vasopressors (epinephrine, norepinephrine and dopamine) alone (407 cases) and combined application has Inotropic vasodilators (dobutamine, levosimendan and phosphodiesterase inhibitors) (581 cases), the impact of these two treatment strategies on short-term mortality in patients with severe cardiogenic shock , The primary endpoint is 30-day mortality. The results showed that the mortality rate of the single drug group was 72%, and the mortality rate of the combined drug group was 60%, (HR: 0.66 [0.55-0.80]. Therefore, the combined drug can effectively reduce the mortality of patients with cardiogenic shock.

Many patients with heart failure (HFrEF) with reduced ejection fraction may continue to get worse even if they receive the best medical treatment. The soluble guanylate cyclase (sGC) pathway of nitric oxide (NO) plays an important role in regulating NO and producing cGMP. “This new mechanism may be used in the treatment of heart failure. The sGC agonist Vericiguat is one of the representatives.” Professor Zhang Yao said.

According to the VICTORIA study announced at the ACC meeting this year, Vericiguat can inhibit vasoconstriction while improving kidney function. VICTORIA is a multi-international center, parallel, double-blind, randomized placebo-controlled study conducted in more than 600 centers in 42 countries and regions including Europe, Japan, China and the United States. A total of 5,050 HFrEF patients were enrolled, and the patients were randomly divided into two groups according to a 1:1 ratio. Under the background of combined standard treatment of heart failure, they were given Vericiguat and placebo treatments. To evaluate whether Vericiguat can reduce the incidence of heart failure hospitalization or cardiovascular death in patients with HFrEF in the context of standard treatment. 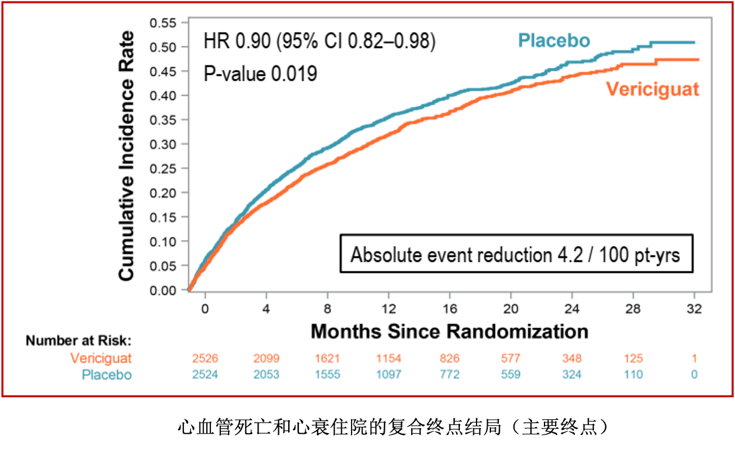