On March 16, the ModeRNA vaccine completed its first injection in Seattle, the United States, becoming the world’s first human trial of a COVID-19 vaccine.

What kind of technology is mRNA vaccine?

mRNA (messenger RNA) is a single-stranded ribonucleic acid that translates proteins in cells.

It is precisely because of these two unprecedented speeds that the development of mRNA vaccines is progressing rapidly.

Researchers can directly modify and edit the RNA segment of the translation target protein through the published RNA sequence of the new coronavirus (for example: Pfizer uses the method of 1-methyl-pseudouridine modification) to obtain a segment that can produce antigen RNA fragments of proteins.

After this piece of RNA is injected into the body, the body’s somatic cells produce a large number of antigen proteins on their own, causing a specific immune response.

In theory, this method can make people resist. The mRNA that enters the human body can further guide the translation of the antigen protein, and degrade it in the body after the guidance is completed. But theory is theory after all. mRNA vaccine technology has appeared as early as the 1990s.

The reason why it has not replaced traditional vaccine technology is that it is very restricted by technology, the nature of mRNA itself and many other factors.

Ordinary vaccines (inactivated virus or antigen protein, etc.) are generally stable and can reach the body by intravenous injection, but the mRNA itself is very unstable and easily degraded.

Pfizer uses liposome encapsulation technology to make mRNA into nanoparticles, which “disguise” vaccines as viruses. After injection, the vaccine enters the cell through endocytosis and releases the mRNA in the nanoparticle in the cell, thereby exerting the role of mRNA.

In this way, the problem of rapid degradation of mRNA after entering the human body can be solved. Judging from the results of phase I, II, and III clinical trials currently published, this program has received data support. 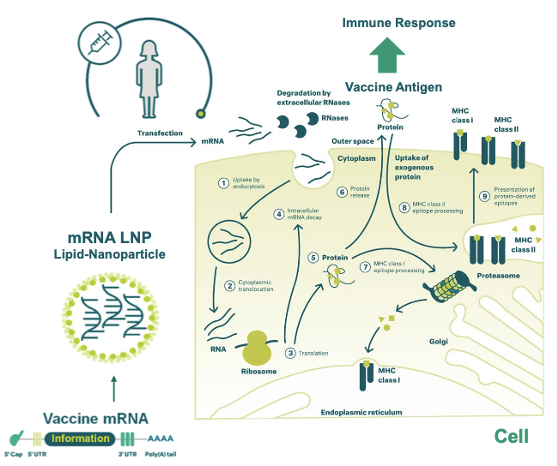