For natural life, breeding offspring is an extremely important mission in its life. However, in modern society, with the increasing pressure of life and the increasing environmental pollution, the infertility rate in countries all over the world is showing a soaring trend, and many couples are suffering from infertility. According to statistics, there are more than 50 million infertility patients in some countries, which is more than 10% of the population of normal childbearing age. This number is beyond our imagination. In the final analysis, the breeding of offspring begins with the combination of sperm and egg, and the genetic material of all cells of an individual is the same. If some cells can be induced to divide and differentiate into sperm or eggs, then infertility can be relieved to a great extent. Infertility issues.

Artificial egg cells become possible On December 17, 2020, researchers from Kyushu University and RIKEN Biosystem Dynamics Research Center published a research paper titled: Reconstitution of the oocyte transcriptional network with transcription factors in Nature. This study shows that a set of 8 transcription factors can transform mouse pluripotent stem cells into oocyte-like cells in the laboratory. This discovery further deepens our understanding of egg cell development and may have a profound impact on reproductive medicine!

During the development of the female germline, primordial germ cells (PGCs) undergo epigenetic reprogramming of fate and sex, divide and differentiate into oocytes and stay in primordial follicles. After the individual enters the pubertal developmental stage, the primordial follicle is activated. Once the oocyte growth is triggered, a large amount of maternal RNA and protein will be synthesized and stored in the cytoplasm. From this point of view, the growth of oocytes occurs during the transition from primordial follicles to primary follicles, and is accompanied by dynamic changes in gene expression. Unfortunately, so far, scientists have been concerned about the genes that control the growth of oocytes. The regulatory network is still poorly understood. In this study, Katsuhiko Hayashi et al. studied the changes in gene expression in the in vitro developmental system of mouse oocytes and performed related functional screenings, thereby determining a set of 8 species that are sufficient to trigger the growth of oocytes. Each transcription factor is the key to the transition from primordial follicle to primary follicle. 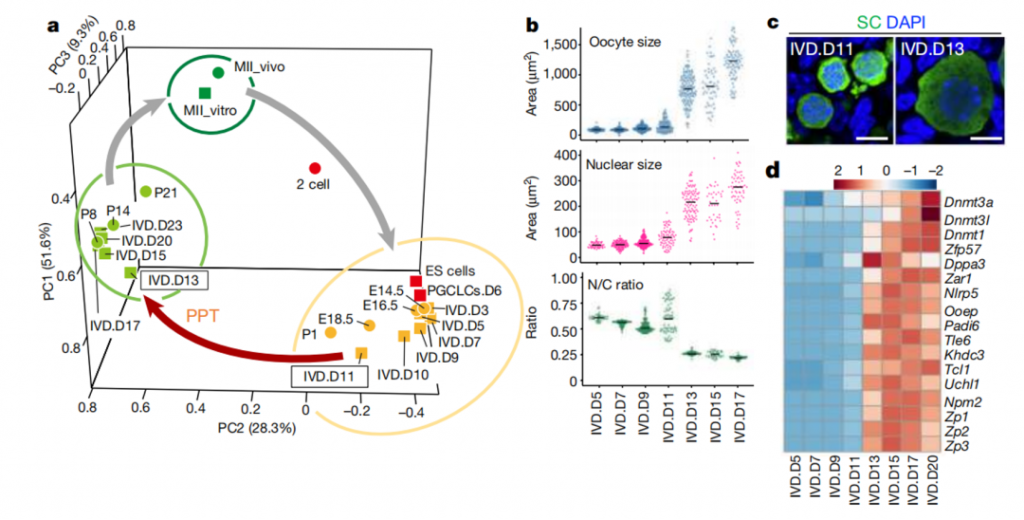 Then, the research team induced the expression of these 8 transcription factors in mouse pluripotent stem cells to test whether they are sufficient to drive the growth of oocytes. The researchers found that the forced expression of these transcription factors can quickly transform pluripotent stem cells into oocyte-like cells. More importantly, although these oocyte-like cells do not undergo meiosis, they can be fertilized and can divide to the 8-cell stage of embryonic development. However, further development beyond this stage will still be affected.

The induced oocyte-like cells can be fertilized and can divide to the 8-cell stage of embryonic development. In summary, this study identified a set of 8 core transcription factors for coordinating the growth of oocytes, and suggested a new Egg source-by inducing pluripotent stem cells to differentiate into oocyte-like cells. This may promote the revolution of reproductive medicine and solve the increasingly severe problem of infertility: artificial sperm

The findings of this study are not only expected to solve male infertility, but also help lesbians in the future to realize their desire to be mothers through stem cell technology without the involvement of men. Parthenogenesis and Parthenogenetic Reproduction in Mice In December 2015, researcher Hu Baoyang, Academician Zhou Qi, and Researcher Li Wei from the Institute of Zoology of the Chinese Academy of Sciences published in Cell Research the title: Birth of fertile bimaternal offspring following intracytoplasmic injection of parthenogenetic Research paper on haploid embryonic stem cells [3]. This study successfully obtained a live parthenogenetic mouse with two maternal genomes by modifying the imprinted genes, and realized parthenogenesis in mammals for the first time.

Not only that, in October 2018, Researcher Hu Baoyang, Academician Zhou Qi, and Researcher Li Wei from the Institute of Zoology of the Chinese Academy of Sciences once again collaborated and published the title: Generation of Bimaternal and Bipaternal Mice from Hypomethylated Haploid in the top academic journal Cell Stem Cell in the field of stem cells. Research paper on ESCs with Imprinting Region. Based on the previous research, combining haploid stem cell technology and gene editing technology, it was the first time to obtain orphan mice with two paternal genomes, and for the first time to achieve mammalian orphan reproduction.

It can be seen that with the rapid development of life sciences, parthenogenesis, parthenogenesis and artificial sperm and eggs that were once unimaginable are not out of reach now. Perhaps, in the near future, infertile couples or same-sex couples can have their own children through biotechnology.