One-step seed expansion culture: from high-density cell bank to 2000 L bioreactor. In recent years, the market demand for biopharmaceuticals has surged, and the production of mammalian cells with high yield, high quality and low cost has an urgent need and a broad market. Such a process not only increases time cost and labor cost, but also has a high risk of pollution. The mammalian cell perfusion culture technology developed in recent years has become a hot spot in industry and academia. Perfusion can not only maintain the high-density and long-term growth of cells, but also the heterogeneity of cell expression products is lower. Especially when double antibody products are expressed, it can reduce the aggregation of expression products and greatly increase antibody production.

Using perfusion culture, compared with batch or fed-batch culture, cells can be maintained in the exponential growth phase for a long time and can reach a higher density of viable cells. The use of perfusion in the process of seed expansion culture can achieve 1:50, 1:100 or even higher inoculation ratios, thereby omitting the multi-step expansion process in the traditional seed expansion process, thus further reducing the risk of contamination .

The traditional method of cell expansion usually requires multiple continuous batch culture steps. Starting from cryopreserved cell lines, they are usually expanded and cultured in shake flasks, and finally need to be expanded into bioreactors for culture. Each round of expansion culture usually takes three to four days, and it is constantly changing to larger-volume reactors such as 50L, 200L, 500L, and then to 2000L. This usually takes more than 2 weeks. In order to save time, more companies currently adopt N-1 perfusion methods, such as WAVE 25, traditional bioreactor + ATF, batch hybrid technology (PB Hybrid Technology), etc., all in order to obtain high-density cells and obtain sufficient cells. The amount of cells inoculated in a large kiloliter reactor. A prerequisite for the success of high-density perfusion culture is a stable bioreactor system that has precise control capabilities and can maintain the stability of culture parameters under high cell densities. At present, most biopharmaceutical companies have introduced the ReadyToProcessWAVE 25 cell expansion system, which has good scalability, uses disposable cell bags, and fully enclosed cultures to prevent pollution. The whole process can be automatically controlled, and the parameters in cell culture can be monitored and controlled in real time, which is extremely convenient.

Here is a way to use perfusion to prepare a high-density seed cell bank, and perform seed amplification on WAVE 25 to achieve one-step seed amplification and cultivation to a 2000L bioreactor. Compared with the traditional process, the operating equipment is greatly simplified, the expenditure cost is reduced, and the seed amplification time from the cryotube to the N-1 bioreactor is saved 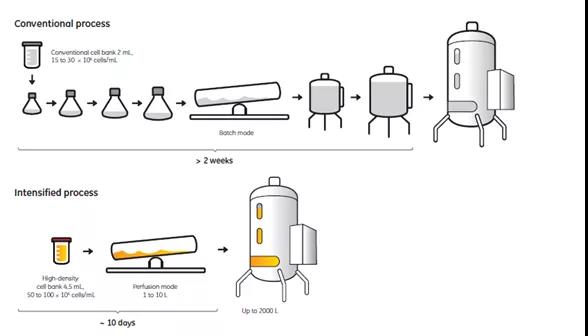 Use the ReadyToProcess WAVE 25 system to cultivate CHO cells to prepare a high-density seed bank. When the cells in WAVE 25 reach a certain density, add the cryoprotectant DMSO and concentrate the volume to freeze the cells at 4.5 mL volume per tube. Then take one from the frozen high-density cell bank to the shake flask to verify the cell status. If the cell viability density meets the standard, it can be expanded to 10L in WAVE 25, and finally inoculated into a 2000L reactor (Figure 2 ). 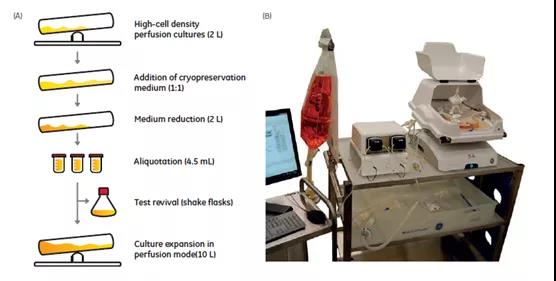 Figure 2. (A) The entire experimental design; (B) System configuration

Run the ReadyToProcessWAVE 25 system in perfusion mode to prepare a high-density CHO cell bank. Two types of cells are used, CHO DG44 cells and CHO-s cells. Inoculated into 2 L ActiCHO™P medium at a density of 0.4×106/mL, and perfused into 10 L Cellbag, with a perfusion flow rate of ~ 137.5 pL/cell/d. The total amount of perfusion medium during the cultivation period is 20 L. Use the Method Editor function to adjust the perfusion rate every two hours based on the estimated growth rate. The medium conditions are controlled at pH 7.1, dissolved oxygen (DO) 40%, and temperature 36.8ºC. The standard for cell harvest is generally 50-100×106/mL with a density of >95%.

For CHODG44 cells, the glucose concentration gradually decreased from 6 g/L at the beginning of the culture to about 1 g/L at the 6th day harvest. The lactic acid increased to about 1.5 g/L on the third day, and then remained relatively stable until the end of the culture. In CHO-S cells, the concentrations of glucose and lactic acid were kept constant at about 2.5 g/L and 1.5 g/L in the latter days of culture. The results show that a certain high perfusion rate can maintain the concentration of nutrients and metabolites at a certain level, so that the cells maintain exponential growth throughout the culture process (Figure 3B). 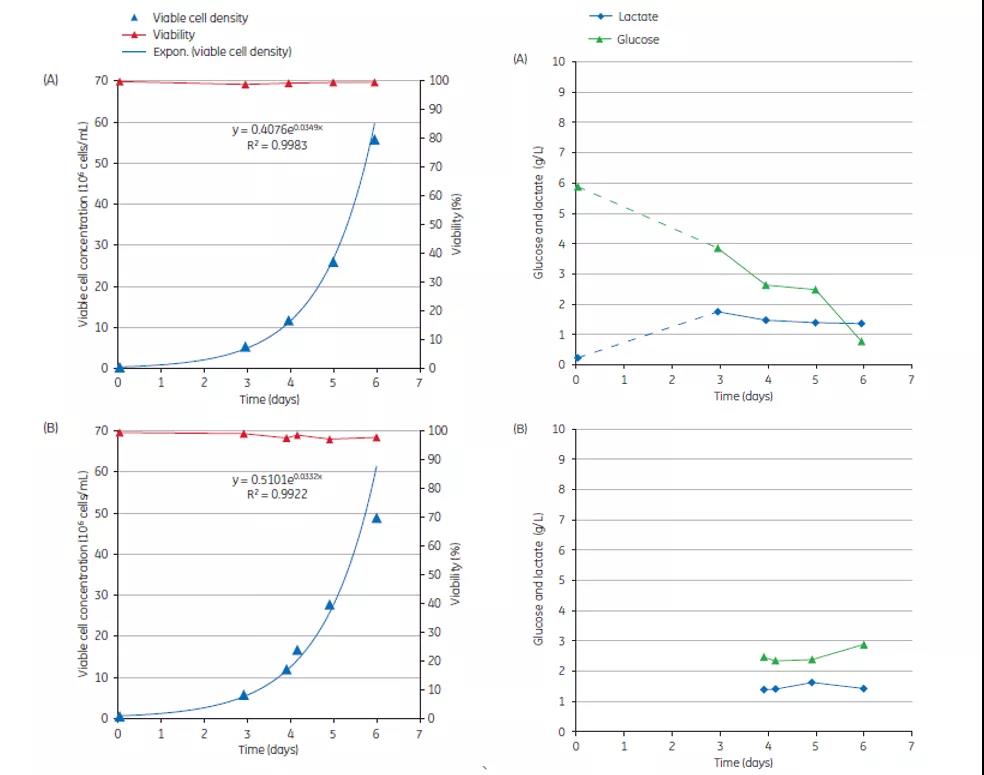 2 L of cell culture medium is enough to establish a high-density cell bank of 400 cells of 4.5 mL/tube, each with a cell density of 50×10⁶ cells/mL. All steps before cell aliquoting can be carried out in the bioreactor without separate centrifugation.

The specific method is when the cells cultured in the ReadyToProcessWAVE 25 system reach the harvest standard, add 15% DMSO pre-frozen storage solution to the cell bag at a ratio of 1:1, and the initial volume of cell culture is 2L. The stirring rate was reduced from 20 rpm to 15 rpm. Filter the retained cells, pump out half of the medium, and reduce the culture system to the original cell concentration and volume (2 L). The cell suspension is aspirated and aliquoted into a 4.5 mL cryotube, and frozen by standard methods. After being stored in liquid nitrogen for a week, take one out and resuscitate it in a shake flask to determine the density of viable cells. The cell viability rate after resuscitation in the shake flask is >90% (Figure 4), which is consistent with the cell bank constructed by the traditional method. 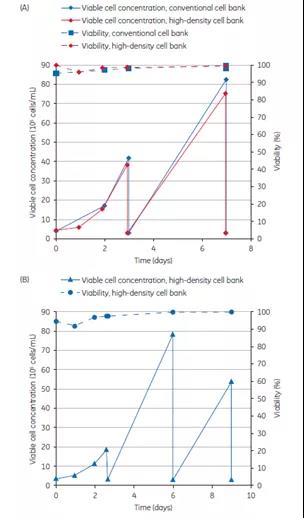 Take out a cryopreserved CHO DG44 cell, thaw and recover it into 100 mL pre-warmed fresh medium (ActiCHO P medium supplemented with 6 mM L-glutamine and 2.8 g/L bicarbonate). Then it was inoculated into a 20 L Cell bag perfusion reactor containing 900 mL of medium. At this time, the viable cell density was 0.225×106/mL. As the cells expand, use the MediumAddition function of the ReadyToProcessWAVE 25 system to add medium regularly until the final volume reaches 10 L. Use the Method Editor function to adjust the perfusion rate regularly to maintain 140pL/cell/d. The culture conditions were controlled at pH 7.1, dissolved oxygen (DO) 40%, and temperature 36.8ºC. The standard for cell harvesting is the density of 50-100×106/mL, and the viability rate>95%. The cells maintained rapid exponential growth during the 10-day culture period (Figure 5). 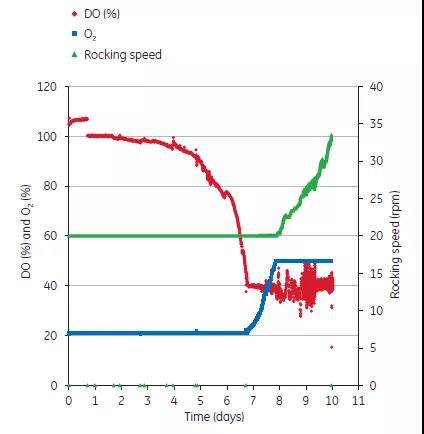 Figure 6 Reactor volume and perfusion medium volume
The ReadyToProcess WAVE 25 bioreactor system can monitor cultivation parameters in real time (Figure 7). Even at high cell density and large working volume, the dissolved oxygen in the culture can be well controlled.

In order to gain a competitive advantage in the competition-driven drug development track, rapid drug production methods have become sought after by enterprises. The use of N-1 perfusion method to obtain high-density cells makes it possible to inoculate a large-scale bioreactor in one step, which greatly shortens the time.

At present, many methods on the market, such as WAVE 25, traditional bioreactor + ATF, and batch hybrid technology (PB Hybrid Technology), can obtain high-density cells. The WAVE 25 device is simple and low cost; the traditional bioreactor + ATF is equipped with a cell retention device on the N-1 bioreactor to improve the efficiency of the fed batch process, save time and cost, but the cost is higher; PB Hybrid Technology One This innovative culture technology that combines Perfusion and Batch culture methods for cell seed expansion can also obtain a high-density cell bank.

The method described in this article demonstrates the advantages of perfusion culture strategy in seed culture applications such as high-density cell bank building and seed expansion. The entire culture process is carried out in a perfusion bioreactor with a cell retention membrane, and a high-density cell bank can be established without a separate centrifugation step to concentrate the cells. And the established cell bank showed higher cell activity after resuscitation. Only one cell of frozen cells is enough to be directly inoculated into 1 L of bioreactor culture fluid, thus omitting the step of shaking flask expansion culture.

Using the perfusion culture mode of the reactor, the efficient one-step seed culture from 4.5 mL cryopreservation tube to 10 L of medium can be completed in 10 days. The density of viable cells is 50×10⁶/mL, which is enough to inoculate to an initial volume of 1700 L. In a 2000-liter bioreactor with an initial cell density of 0.3×10⁶/mL.

This perfusion culture method not only allows high-density culture of CHO cells, but also simplifies the cell bank preparation process and improves the efficiency of seed expansion culture.