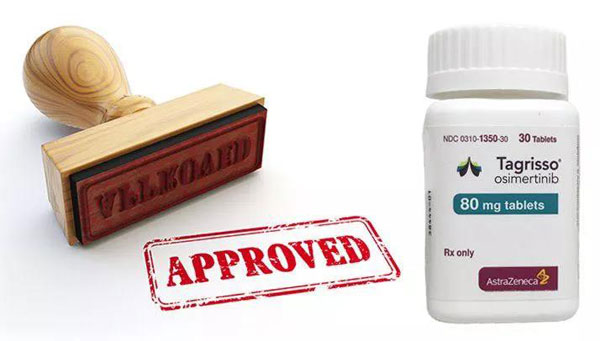 This means that targeted therapies can be used in the early stages of the disease to improve the quality of life of cancer patients.

▌Early use of targeted drugs for lung cancer patients

Lung cancer is the most common cancer in some countries and the leading cause of cancer-related deaths worldwide.

Non-small cell lung cancer accounts for more than 80% of the total number of lung cancers. Among them, about 20% of NSCLC patients will carry EGFR mutations. Mutations in this protein can cause rapid cell growth and help cancer spread.

Although most diagnosed NSCLC patients have tumors that cannot be removed, there are still 30% of patients whose tumors can be surgically removed. These patients can choose osimertinib as an adjuvant therapy after tumor removal. By reducing the risk of postoperative recurrence of lung cancer patients, improve the quality of life of patients.

Osimertinib was approved as the first-line treatment for patients with metastatic NSCLC in 2018. These patients have tumors with EGFR exon 19 deletion or exon 21 L858R mutation.

Earlier, osimertinib had been awarded the title of “orphan drug” for the treatment of NSCLC patients with positive EGFR mutations.

In October, the Center for Drug Evaluation (CED) of the National Medical Products Administration (CED) included osimertinib as a priority review for the adjuvant treatment of non-small cell lung cancer patients with EGFR-sensitive mutations after tumor resection;

It is worth noting that the latest edition of “NCCN Guidelines” has recommended the third-generation EGFR-TKI osimertinib as an adjuvant treatment recommendation for patients with stage IB-ⅢA EGFR mutations after surgery, and patients who have received adjuvant chemotherapy or who are intolerant to chemotherapy , You can use osimertinib.

▌The clinical trial data is amazing, and the risk of recurrence is reduced by 80%!

This approval is based on positive data from a randomized, double-blind, placebo-controlled phase 3 clinical trial of ADAURA. The study enrolled 682 patients with early stage NSCLC who had EGFR exon 19 deletion or exon 21 L858R mutation positive and undergoing tumor resection.

The results of the trial showed that compared with patients receiving placebo, patients in the osimertinib treatment group had an 80% lower risk of disease recurrence.

According to data released by ASCO in 2020, the osimertinib treatment group has not yet reached the median DFS, while the placebo group has 19.6 months.

Early prevention, early diagnosis, and early treatment are the keys to the treatment of cancer. The approval of osimertinib allows lung cancer patients with specific gene mutations to use targeted therapy at an early stage, which is expected to further improve the treatment options for early patients.