Biological DNA is always mutated spontaneously, which is also the driving force of biological evolution, and human beings are of course no exception. In most cases, this gene mutation is harmless, but in a few cases it can affect the normal function of cells and even cause cancer.

Generally speaking, the genetic mutations in the human genome involve only a few nucleotides, but there are also catastrophic changes involving the entire chromosome——Chromosome fragmentation
(Chromothripsis).

DNA double-strand breaks caused by various unexpected reasons, which in turn cause chromosomes to split into many fragments, and then under the DNA self-repair mechanism, these fragments are randomly reconnected together, causing one or more chromosomes to rearrange and form a mosaic Type chromosome. Previous studies have shown that chromosome fragmentation is related to a variety of cancers and congenital diseases.

It is a centromere circular DNA molecule that appears in pairs outside the chromosomes, ranging in size from several hundred kb to several hundred Mb. This extrachromosomal hereditary unit is a small Mb-level ring structure, acentromere, no telomere, and can replicate autonomously. It often carries oncogene and drug-resistant gene amplification, and is related to genome instability, tumor malignancy and drug resistance Etc. are closely related.

The team’s previous research found that in many types of cancer, as many as half of cancer cells contain extrachromosomal DNA (ecDNA) carrying oncogenes.

In this study, the research team used the method of directly observing the structure of the chromosome to determine the steps of gene amplification and the potential mechanism of resistance to the cancer drug methotrexate.

The results of this study indicate that chromothripsis is the main driving factor that accelerates the rearrangement and amplification of genomic DNA into extrachromosomal DNA (ecDNA), allowing cells to quickly acquire tolerance to changing growth conditions.

Chromosome fragmentation (chromothripsis) can amplify intrachromosomes(Internal)Conversion to extrachromosomal amplification(External). Then, the amplified extrachromosomal DNA (ecDNA) responds to DNA damage caused by cancer treatments such as chemotherapy or radiotherapy, and reintegrates into a new position on the chromosome. 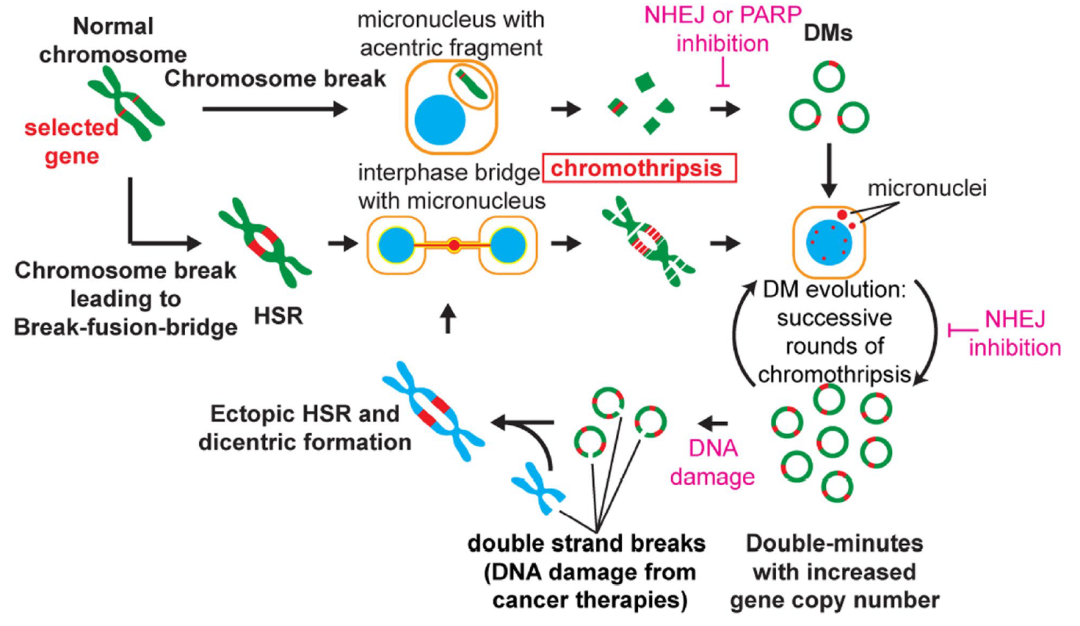 This study highlights the important role of chromothripsis in the DNA amplification of cancer cells and also explains how cancer cells become more aggressive and resistant.