Today I will share with you a very important review published in 2017. Because the logical relationship of this review is very clear, the core points of this review are as follows:

Thyroid cancer in children and young adults may originate from thyroid blasts in the fetus. It is a self-limited cancer that stops growing after middle age.

Ultrasonography of the thyroid gland in children and young people should be strictly restricted to avoid overdiagnosis and overtreatment.

Fatal thyroid cancer may originate from thyroid stem cells. The tumor only appears after middle age and grows faster.

Abstract For a long time, it has been believed that thyroid cancer occurs in middle age. After its repeated proliferation, it causes further damage to the genome, and then develops into a more aggressive and lethal cancer. However, in 2014, some research reports may lead to significant changes in our understanding of the natural history of thyroid cancer. The high incidence of papillary cancer in young people suggests that the initial onset of thyroid cancer may occur in infancy.

In an observational experiment, the growth rate of papillary microcarcinomas (PMCs) was very slow, which also supports this conclusion. The proliferation rate of PMCs is negatively correlated with age, and surgical removal of PMCs cannot reduce the mortality of thyroid cancer. These findings strongly indicate for the first time in human history that there is a self-limiting cancer, which is truly malignant but does not develop into a lethal cancer.

The 2014 Trilogy of Thyroid Cancer

Thyroid cancer has long been considered to be caused by multi-step carcinogenesis. Tumor cells are derived from thyroid follicular cells, through accidental damage of multiple genomes, especially oncogenes or tumor suppressor genes that accelerate proliferation or promote malignant phenotypes Under the action of, the ability to invade surrounding tissues or transfer to distant organs occurs [1,2]. According to clinically obvious data on the prevalence of thyroid cancer, it is believed that the first carcinogenesis occurred in middle age. Some cancer cells have a stronger phenotype after repeated proliferation, leading to the accumulation of gene mutations [3,4].

This result shows that removal of PMC did not lead to the prevention of death from cancer. If the concept of thyroid cancer is considered to be a long-term multi-step carcinogenesis, PMC progresses to a phenotype, and finally becomes a fatal cancer. It seems very confusing. More than 60% of PMC patients have cervical lymph node metastasis.

Therefore, PMC is not a precancerous lesion, but a real cancer. They already have the characteristics of cancer, but they will not become lethal cancer because of their limited proliferation capacity. These tumors can be called self-limiting cancers. These studies are the first reports to prove the existence of a large number of self-limiting thyroid cancers.

The next surprising data is a report from the Fukushima Health Management Survey, in which almost all children in Fukushima Prefecture, Japan were subjected to ultrasound examinations. Before this project, thyroid cancer in children and adolescents was considered very rare; however, the survey found that one in 2700 children had papillary cancer, and the incidence increased sharply after the age of 15.

These data have led many researchers to believe that the onset of thyroid cancer occurs in infancy. Two previous findings also support this view. The risk of radiation-induced thyroid cancer is obvious in children under about 5 years of age, but not in adults [9,10]. The induction of thyroid cancer by expressing oncogenes in the thyroid is only possible in fetal mice [11-13].

Another study published in 2014 confirmed the above view. Ito et al. conducted observational experiments on PMCs for decades and found that only 8% of the observed PMCs [14] showed a significant increase within a decade. This finding clearly indicates that the onset of these PMCs occurred in children rather than adults. In addition, PMCs in young patients increased rapidly, while PMCs in patients over 60 years old did not increase.

Therefore, no duration-dependent progression of cancer was observed. In addition, in this observational trial, none of the 1,235 patients died of thyroid cancer. Considering that approximately 10% of patients in the general population die of thyroid cancer [15,16], it is inferred that these PMCs are unlikely to progress to fatal cancers. These findings explain the conclusion of overdiagnosis of thyroid cancer in Korea. Surgical removal of PMC that does not develop into fatal cancer does not help reduce the mortality associated with thyroid cancer.

These three studies, which can be called the 2014 trilogy of thyroid cancer, may be regarded as milestones in the history of cancer research, because they reported the existence of self-limiting cancers. These are true malignant tumors but do not cause patients. death.

Before the publication of these studies, it was generally believed that the early detection and surgical treatment of microcancers were reasonable, because it was believed that this cancer might develop into more aggressive features. However, for self-limiting cancers (which are estimated to account for the vast majority of thyroid cancers), early diagnosis and surgery can lead to overdiagnosis and overtreatment, as is the case in Korea.

From 0 to 10 years old, their proliferation rate remains almost unchanged. Moreover, after the age of 5, the risk of radiation-induced thyroid cancer will decrease. There is still a large number of thyroid cell proliferations in young adults, but after the administration of radioactive iodine to treat Graves disease, no increased risk of thyroid cancer has been observed in these people [10].

However, so far, the accumulation of gene mutations has not been reported in aggressive cancers such as undifferentiated cancer and anaplastic cancer. In contrast, genetic changes in thyroid tumors are tissue-specific [20-23]. Some changes are only observed in anaplastic cancers, while other changes dominate in differentiated cancers. Some previous studies have shown that BRAF mutations are associated with poor prognosis in patients with papillary cancer [24,25]. However, even this is controversial because it was found during the Fukushima Health Management Survey that BRAF mutations have a high prevalence in adolescent cases, and these cases are expected to show a good prognosis [26].

When we consider multi-stage cancer, the most important point is whether the “progress” actually occurs in thyroid cancer. Assuming that small and “benign” thyroid cancer gradually becomes more aggressive thyroid cancer, why did not a single patient die of thyroid cancer during the PMCs observation trial? Why does the preventive surgery of Korean PMC not reduce the mortality of thyroid cancer? [ 5]

Another type of cancer, derived from undifferentiated thyroid stem cells is called immature cancer. Immature cancer remained silent for decades, but suddenly began to proliferate after middle age. Due to its repeated proliferation ability, immature cancer is associated with a poor prognosis and can be fatal.

Mature cancers are not always harmless, because some mature cancers create environmental conditions that are conducive to the growth of thyroid cells, which can kill the patient before the thyroid cells stop proliferating. However, most of them appear in the form of PMC after middle age, and they will not transform into immature cancer. The initial growth rate of immature cancer is very high and often causes metastasis.

Therefore, in the absence of metastasis, there is little chance of being discovered as a PMC and being the object of observational research and experimentation. This consideration can explain why no patients died of thyroid cancer in the PMCs observation trial. Therefore, although mature and immature cancers look similar in pathology, they are different in origin, growth, and clinical course.

Although the fetal cell carcinogenesis model may help explain many clinical and experimental evidences, there is an important question that needs to be answered: Why do immature cancers derived from thyroid stem cells remain silent for decades? Thyroid blasts, the cells of origin of mature cancers, It may be eliminated before puberty because the risk of cancer caused by radiation is very limited in children. 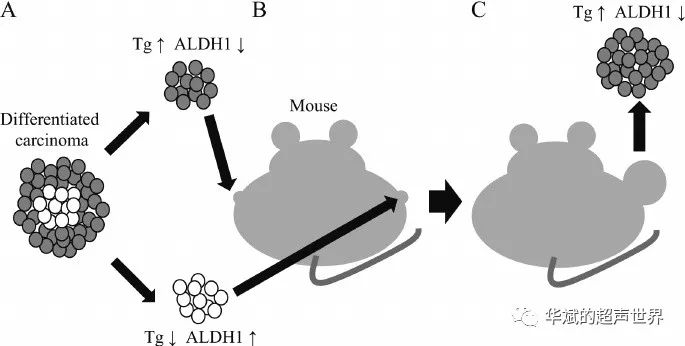 Differentiated thyroid cancer cells express ALDH1 (a), and then they were implanted in nude mice at different sites (B). The tumor grows only from ALDH1-positive cells (C). This tumor shows low expression of ALDH1 and high expression of Tg.

After the accident at the Fukushima Daiichi Nuclear Power Plant, Fukushima Prefecture in Japan began to conduct multiple ultrasound examinations on approximately 300,000 children. So far, according to the first and second screening [8], 113 and 25 children are suspected of thyroid cancer, respectively. Using each model of the natural history of thyroid cancer, we can predict the outcome of this investigation (Figure 4 and Table 1). In addition, we can think that the selected model may be correct by comparing the data analysis from the first to the third scan in the near future.

Since thyroid cancer is a mature cancer that is not fatal, surgical removal of these cancers will not help reduce the mortality rate of thyroid cancer. Fatal immature cancers appear after middle age. Therefore, in the fetal cell carcinogenesis model, the Fukushima Health Management Survey predicts that it will lead to obvious overdiagnosis and overtreatment.

In addition to discussing multi-step and fetal cell carcinogenesis models, the thyroid cancer trilogy reveals that there are two distinct types of thyroid cancer: self-limiting cancer and lethal cancer (Figure 5). This consideration is consistent, because thyroid cancer is found to be more aggressive in patients under 20 and 60 years of age than in middle age, while self-limiting cancer and lethal cancer are found in young people and old people, respectively. The patient proliferates rapidly [36].

One of the most surprising findings in the Fukushima Health Management Survey is that the average size of papillary carcinoma found in the first screening was 1.42 cm [8]. Therefore, most childhood and adolescent tumors are macroscopic cancers, but most are not examined by ultrasound. Most of these tumors are considered to be self-limiting tumors that stop growing in middle age and then become PMCs. However, considering the fact that juvenile thyroid cancer is clinically very rare, these large numbers of tumors may shrink in middle age, therefore, early detection or surgery must lead to obvious overdiagnosis and overtreatment.

For juvenile thyroid cancer accidentally discovered by ultrasound, surgical indications may be strictly limited. In addition, thyroid screening for young people should be restricted because it is likely to lead to overdiagnosis. Elderly thyroid cancer is mixed with self-limiting and lethal cancers, and it is difficult to distinguish between them. Data from the PMCs observation test shows that self-limiting cancer will not increase in patients over 60 years of age.

Therefore, when papillary cancer in patients over 60 years of age shows significant growth, it is likely to be a fatal cancer. In the elderly, ultrasound screening is useful for early detection of fatal cancer; however, immediate surgery after the test is not recommended, especially PMC. Instead, consider calculating the growth rate through repeated ultrasonic inspections. However, tumors with significant metastasis or extrathyroid invasion should be excluded from this observational test.

The trilogy of thyroid cancer revealed the existence of self-limiting cancer for the first time in human history. In the past few decades, researchers and clinicians have believed that cancer will progress. Therefore, all cancers should be detected early and treated with surgery. However, for self-limiting cancers, such early action does not bring good results.

If the good prognosis of thyroid cancer is considered, self-limiting cancer may account for the vast majority of all thyroid cancers. Therefore, it is not difficult to imagine that a considerable number of patients with thyroid cancer, especially young patients, have undergone unnecessary operations. In the future, surgical resection will be limited to fatal cancers and, if necessary, the rapidly growing self-limiting cancers.

However, there are currently no known indicators to distinguish self-limiting cancer from lethal cancer except for the age of the patient. The detection of thyroid cancer stem cells in tumor tissue is one of the methods for selecting thyroid cancers with poor prognosis, although this technique has not yet been established [37,38].