When doing document interpretation and database introduction, I would mention something called TMB.

Although ICI therapy has made breakthrough progress, it is not without side effects, nor does it have an ideal effect in all patients.

Therefore, people are eager to find biomarkers that can identify a good response to ICI treatment.

In 2017, it was approved by the US Food and Drug Administration that pembrolizumab (anti-PD-1) can be used for advanced MSI-H/dMMR solid tumors.

Regardless of their tumor type, these tumors have progressed after previous treatment.

This is the first time that the US Food and Drug Administration has approved a molecular biomarker that has nothing to do with tumor type.

Finally, although both PD-L1 and MSI-H/dMMR have been identified as predictors of ICI response. But they are still not eyebrow tattoos, and their sensitivity and specificity are not good.

Therefore, it is necessary to continue to seek better predictions of ICI treatment response. One of the emerging biomarkers is tumor mutational burden (TMB).

In short, TMB is the number of mutations present in the tumor.

Since many of the original studies using this biomarker were calculated based on exome sequencing, it is usually regarded as the number of mutations present in the coding region of the genome (exome).

However, since the test method used to calculate TMB has been extended to various targeted gene sequencing panels, its coverage is much smaller than the whole exome.

It is precisely because different platforms may cover different numbers of genes, this number is the most informative when comparing the TMB values ​​of different test methods and platforms.

Explanation of the sequencing panel. When clinical genetic testing is performed, not all genetic mutations are detected. Instead, they artificially select multiple important genes for testing.

For example, the MKSCC introduced earlier is a gene panel. This panel detects the genome changes of 468 genes.

The principle of using MSI-H/dMMR and TMB as ICI biomarkers is similar: a large number of mutations produce a large number of altered peptides, some of which are successfully expressed and processed by the major histocompatibility complex, thereby Produce new antigens, and the immune system can produce anti-tumor responses (Figure 1).

Therefore, the more DNA mutations there are, the more candidate polypeptides will be produced, resulting in a higher probability that the new antigen will be successfully recognized by the immune system.

Therefore, there is overlap between MSI-H/dMMR and high TMB tumors. However, it is worth noting that although many MSI-H/dMMR tumors also have high TMB, a large proportion of high TMB tumors have no defects in MMR. 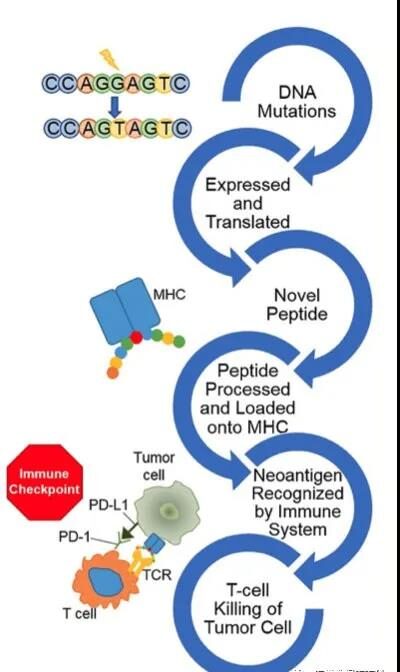 In addition to MSI-H/dMMR tumors, high TMB values ​​are often observed in adult solid tumors, which are related to environmental exposures such as smoking in lung and bladder cancer and UV exposure in melanoma.

Although the pathogenic POLE mutation among endometrial cancer and colon cancer is relatively rare, it has a higher TMB.

The TMB value can vary greatly between different tumor types and within the same tumor type. In addition, although not all tumor types have high TMB, there will always be several patients with high TMB.

Therefore, similar to the MSI-H / dMMR biomarker, due to its unpredictable indications for tumors, TMB is also expected to be used as a biomarker in a variety of tumor types.

In several tumor types, high TMB is related to the response to ICI.

For example, in patients treated with nivolumab and ipilimumab, regardless of the expression of PD-L1, it was found that high TMB was associated with a significant improvement in non-small cell lung cancer (NSCLC) in progression-free survival.

This also provides evidence that TMB and PD-L1 may be used as independent biomarkers.

The use of TMB as a biomarker is not limited to NSCLC, because there is evidence that TMB is also a predictive biomarker for ICI treatment of patients with head and neck cancer and bladder cancer.

Although TMB is a promising indicator of ICI therapy, care must be taken if it is to be widely used in various tumor types.

Due to the lack of consensus and standardization on TMB, it is unclear whether different tumor types should have different cut-off values ​​to be classified as high TMB and low TMB.

For example, the cutoff value of TMB in the aforementioned NSCLC is 10. In other studies, the cut-off value is determined based on the median of the specific tumor type and cohort.

As mentioned earlier, the gold standard for TMB testing is to perform whole-exome sequencing of tumors and matched “normal” tissues to remove germline mutations.

However, for many clinical laboratories, this is both expensive and difficult.

Therefore, some research groups have demonstrated that fairly robust TMB calculations can be calculated from panels containing a sufficient number of targeted cancer genes.

We can also expect that the same specimen types that are sufficient for routine genotyping analysis will also Will apply to TMB calculations.

If the tumor purity is high enough, it is expected to show the same good performance in TMB calculations.

Here is a brief talk about the so-called germline mutation. Human chromosomes are first obtained from parents based on Mendelian inheritance.

When tumors occur, new mutations will occur. Here, tumor tissues and normal tissues are tested to determine which mutations are generated during tumorigenesis.

Although TMB is a promising biomarker, there are still several problems. The first is the definition or cut-off of high TMB, and whether it should depend on the tumor type.

Another best strategy involves calculating TMB, including technical laboratory methods, the number or regions of genes to be included, methods for screening germline variants, and other bioinformatics methods.

Currently, there are several working groups whose goal is to make recommendations and evidence to standardize the TMB measurement method.

Indeed, from a pathologist’s point of view, the standardization of TMB scores will greatly promote the use of TMB as a routine biomarker in clinical practice.

Finally, the true usefulness of TMB as a clinical biomarker is still being evaluated in a clinical trial environment, and more data and evidence are needed to support the routine implementation of this biomarker in pathological practice.

In addition, compared to the use of limited, single biomarkers, when TMB is used in combination with other biomarkers such as PD-L1 and T cell inflammation markers, TMB may have its greatest use.