Lung squamous carcinoma: First Chinese PD-1 Antibody Approved. Some people say that “PD-1 is too much to be used for bathing.” Why does Novartis, the global pharmaceutical giant, have to spend a huge down payment of US$650 million to obtain the foreign rights and interests of tislelizumab? Tilelizumab has been approved as an indication for lung cancer. 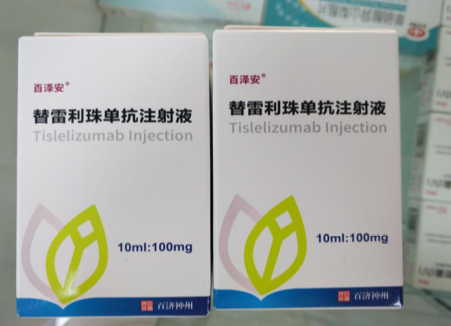 After the news came out, BeiGene’s share price was also greatly encouraged and reached new heights.Regardless of morbidity or mortality, lung cancer ranks first among cancers. In 2018, there were approximately 770,000 new cases of lung cancer and approximately 690,000 deaths in China [1], among which non-small cell lung cancer (NSCLC) is the most common type of lung cancer.

The approval of the State Drug Administration is based on the results of a phase 3 clinical trial (RATIONALE 307 study). A total of 360 patients with stage IIIB or IV lung squamous cell carcinoma were enrolled in the trial. The control group received only paclitaxel/carboplatin chemotherapy. There are two chemotherapy regimens for tislelizumab, one of which is combined paclitaxel/carboplatin treatment . Because the patient has never been treated before, this is the first-line treatment plan.

The results of this clinical trial were announced for the first time at the American Society of Clinical Oncology (ASCO) annual meeting in May 2020. Compared with traditional chemotherapy, the combination of tislelizumab and paclitaxel and carboplatin reduces the patient’s risk of disease progression by 48% and extends the progression-free survival time from 5.5 months to 7.6 months.

After tislelizumab combined treatment, 73% of patients achieved objective remission, while less than 50% in the chemotherapy group, indicating that the number of patients who actually benefited increased by nearly 50%; the median duration of remission reached 8.2 Month, nearly 2 times higher than the chemotherapy group. At the same time, the safety data of the combined treatment group were consistent with known risks, and no new safety warnings appeared.

After entering the era of tumor immunotherapy, for the first-line treatment of lung squamous cell carcinoma, only Pembrolizumab (Drug K) was approved in China. Therefore, Tilelizumab is the first Chinese PD-1 monoclonal antibody approved for this indication.

Prior to this, tislelizumab has obtained two indications approved by the China Food and Drug Administration, namely relapsed/refractory classic Hodgkin’s lymphoma (R/R cHL) and locally advanced or metastatic urine Urothelial cancer (UC). It is reported that tislelizumab combined with chemotherapy for the treatment of advanced first-line non-squamous non-small cell lung cancer (NSCLC), and two new indications for unresectable hepatocellular carcinoma (HCC) patients who have previously received treatment have been applied for the marketing of two new indications. NMPA accepted and is currently under review.

In the medical insurance negotiations conducted in December last year, tislelizumab was also successful, and the price cut was included in the latest version of the National Medical Insurance Drug List (full name: “National Basic Medical Insurance, Work Injury Insurance and Maternity Insurance Drug List (2020)” “, will be implemented on March 1 this year. According to regulations, the national health insurance can reimburse the expenses, only cover the two indications of tislelizumab approved before the negotiation, but because of tislelizumab It can only be sold at the reduced price, and patients with lung squamous cell carcinoma can still enjoy reduced price benefits.

In terms of incidence, both classic Hodgkin’s lymphoma and urothelial carcinoma are far lower than lung cancer, and the two previously approved indications of tislelizumab are not first-line treatments, and the applicable population is very limited. Now that tislelizumab has been approved for lung squamous cell carcinoma indications, and it is a first-line treatment, it is expected to have a large market. With the introduction of medical insurance, more patients will be able to pay for the treatment. Therefore, BeiGene‘s share price has reached a new height, reflecting investors’ optimism about the prospects of tislelizumab.

It should be pointed out that although the price is discounted, the therapeutic effect of tislelizumab is not discounted. On the contrary, from the current data, the anti-cancer ability of tislelizumab has been upgraded. (See the long picture released in the same period of this number)

As the only PD-1 monoclonal antibody modified in the Fc segment of the antibody, tislelizumab has been internationally recognized and will soon be sold in other countries

On January 12, 2021, BeiGene announced that it had reached an agreement with the global pharmaceutical giant Novartis to license the development, production and commercialization of tislelizumab in multiple countries to Novartis.

To this end, Novartis will pay a down payment of up to 650 million U.S. dollars to BeiGene, which is Chinese drug authorization cooperation project with the highest down payment so far; the total transaction amount exceeds 2.2 billion U.S. dollars, which also sets the current Chinese single-variety drug authorization. Record the highest transaction amount.

At present, ten PD-1/PD-L1 monoclonal antibodies have been marketed globally, of which four are available in China. Not only that, there are currently nearly 100 PD-1/PD-L1 monoclonal antibodies undergoing clinical trials at different stages, and there is even such a saying: “You can use PD-1/PD-L1 to bathe in the future”! Under such circumstances, why does Novartis, the global pharmaceutical giant, have to invest heavily in cooperating with BeiGene?

The answer is actually very simple: tislelizumab is currently the only PD-1 monoclonal antibody that has been genetically engineered in the Fc region of the antibody [3]. It is not easily swallowed by macrophages in the body [4], so it can be changed. Complete anti-cancer tasks in the body for a long time, blocking the combination of PD-1 and PD-L1!

The countries involved in the cooperation and authorization between BeiGene and Novartis include the United States, Canada, Mexico, EU member states, the United Kingdom, Norway, Switzerland, Iceland, Liechtenstein, Russia and Japan.

The two parties will jointly develop tislelizumab in the above-mentioned countries, and Novartis will be responsible for registration applications after the transition period and will carry out commercialization activities after approval. In addition, both parties can conduct clinical trials on a global scale to evaluate potential drug combinations of tislelizumab combined with other anti-tumor therapies; BeiGene can jointly sell products in North America, and part of the operating funds will be provided by Novartis .

The combination of BeiGene and Novartis will enable a new local anti-cancer drug with international quality to go global at a more reasonable price and benefit more patients.

Hope that more indications will be approved and more patients will benefit!