People have always thought that poultry and fish are foods that are good for the heart, but the process of frying changes the structure of the food. When frying food, the structure of fat in the oil changes and is absorbed by the food, causing hardening of the blood vessels, high blood sugar and other diseases.

Cardiovascular disease (CVD) is still the leading cause of death worldwide. Diet pattern is a key factor in CVD and mortality. Fried foods are popular all over the world and form part of the Western diet. Although more and more studies have reported the adverse effects of Western dietary patterns, it is still unclear whether the consumption of fried foods increases the risk of cardiovascular disease and death.

On January 19, 2021, Hu Fulan from the Health Science Center of Shenzhen University and others published a study titled: Fried-food consumption and risk of cardiovascular disease and all-cause mortality: a meta-analysis of observational studies in Heart, a journal of BMJ paper.

The study showed that fried food intake is associated with an increased risk of serious heart disease and stroke.

Researchers say that it is clear that Western-style diets cannot promote cardiovascular health, but it is not clear the exact effect of fried foods on the risk of serious heart disease and stroke.

To clarify this point, the researchers searched all articles in PubMed, EMBASE and Web of Science before April 11, 2020, and the research analysis included 19 articles.

All-cause mortality was included in 6 studies, including 754,873 participants and 85,906 deaths, with an average monitoring period of 9.5 years to assess the potential link between fried food consumption and cardiovascular disease and death from any cause. 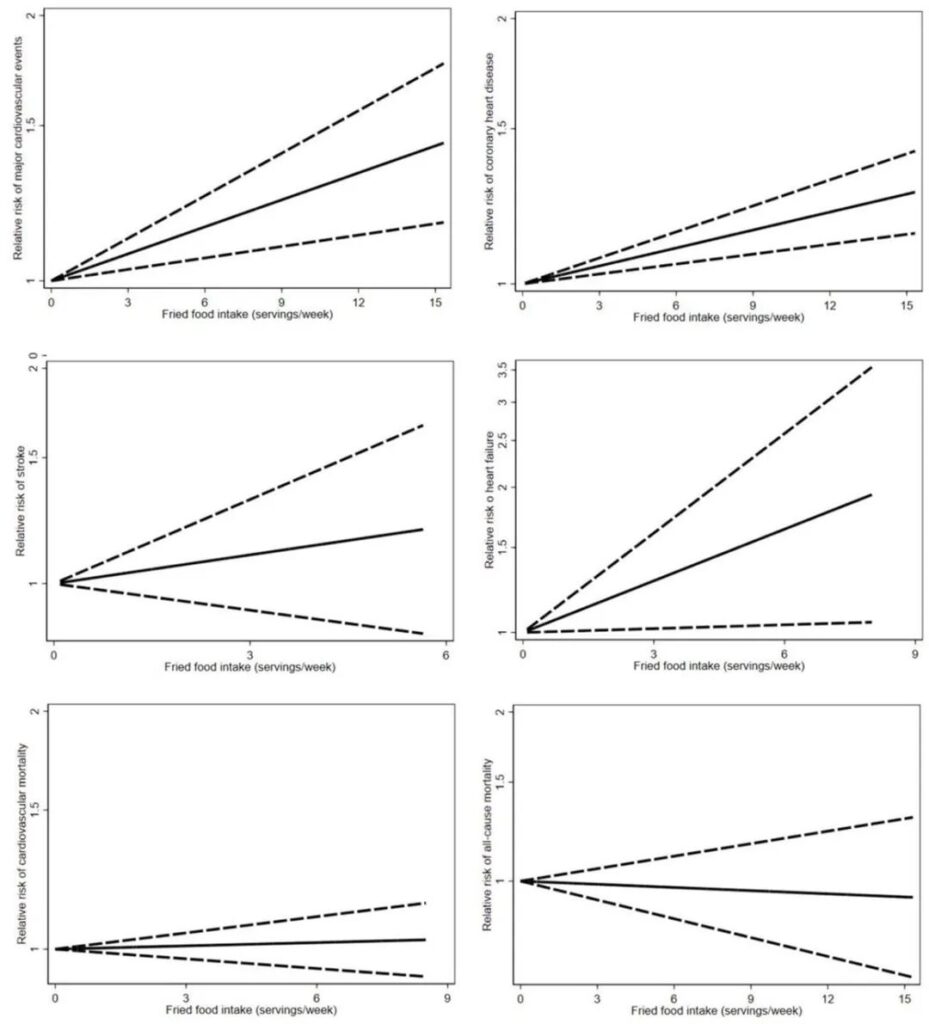 When stratifying according to different studies and participant characteristics, it is more important that there is a linear correlation between fried food consumption and major cardiovascular events, coronary heart disease and heart failure.

Researchers said that several studies included only one type of fried food, such as fried fish, potatoes or snacks, rather than total fried food intake, which may underestimate the association found.

They pointed out that exactly how fried foods affect the development of cardiovascular disease is not entirely clear, but they have proposed several possible explanations.

Fried foods increase energy intake due to their fat content, and they produce harmful trans fatty acids from the hydrogenated vegetable oils that are often used to cook them.

Frying also promotes the production of chemical by-products related to the body’s inflammatory response, and foods such as fried chicken and French fries are usually high in salt and often accompanied by sugary drinks.

In January 2019, researchers from the University of Iowa in the United States published a study in the BMJ magazine, which showed that compared with women who did not eat fried food, women who ate fried chicken every day had a 13% higher risk of death from premature aging. The impact of fish (7% increase) is only slightly second to that of fried chicken.

Researchers mentioned that one-third of adults in North America like to eat fast food every day, and fast food often contains fried foods. Eating fried foods increases calorie intake, thereby increasing the risk of obesity, which is associated with an increase in mortality.

People have always thought that poultry and fish are foods that are good for the heart, but the process of frying changes the structure of the food. When frying food, the structure of fat in the oil changes and is absorbed by the food, causing hardening of the blood vessels, high blood sugar and other diseases. If you eat fried foods with high-sugar beverages and lack the intake of fruits and vegetables, the health impact will be even greater.