A pulmonary nodule was found in the physical examination, does it mean that you have lung cancer?

1) The medical meaning of pulmonary nodules is: the imaging manifestations are focal, round-shaped, and densely dense solid or subsolid lung shadows ≤3cm in diameter, which can be isolated or multiple, without Atelectasis, hilar lymphadenopathy and pleural effusion.

Multiple pulmonary nodules often appear as a single pulmonary nodule with one or more small nodules. It is generally believed that more than 10 diffuse lung nodules are mostly malignant tumor metastases or benign lesions. 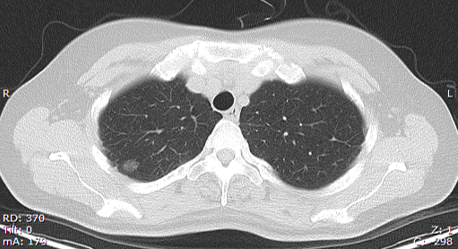 Some studies have pointed out that among the normal population in some countries, the probability of a lung nodule on physical examination is 20%-40%. In fact, the final pathological diagnosis of lung cancer patients is only 1%-2% of the total number of people screened. 90% Lung nodules are benign.

Many lung diseases such as inflammation and tuberculosis may form benign lung nodules. People who smoke or engage in specific occupations for a long time may also form lung nodules due to carbon deposition.

It is undeniable that almost all lung cancers evolve from small lung nodules, but lung nodules are not the same as lung cancer. In most cases, even if you really suffer from early stage lung cancer, the effect of surgery is very good. It can be close to cure. It does not require chemotherapy, radiotherapy and targeted therapy. There are even some lung cancers because they grow very slowly. Under scientific follow-up , You don’t need any treatment, you can also observe no change in 8-10 years.

3. How to deal with lung nodules?

For lung nodules, CT follow-up is the main solution, and there are different follow-up strategies for different nodules. For a single nodule with a high-risk factor and a diameter of ≥8mm, the possibility of malignancy is high. If necessary, it is recommended to conduct multidisciplinary assessment, active surgical intervention or perform CT percutaneous lung puncture, bronchoscopy, and other further identification.

It should be emphasized that the follow-up guidelines mentioned are only general treatment opinions, and cannot be used as a corresponding treatment plan for each type of nodule. The specific treatment plan for pulmonary nodules must be given after a doctor’s professional diagnosis.