Cell: Theoretical basis for colonization resistance of microbial flora.  The study reveals that after the host is infected with non-lethal pathogens, it is possible to increase taurine to enrich the intestinal microbiota for aerobic respiration and enhance its resistance to subsequent infections.

Pathogen infections are ubiquitous throughout the evolution of humans and other organisms. In response to this situation, not only did the human immune system successfully evolve and acquire the ability to innate and adaptive memory against pathogens, it promotes the host’s faster and more rapid response to subsequent infections. The strong response, and the colonization resistance of the microbial flora in the body (the ability to resist colonization by pathogens) also provides a strong barrier for the invasion of pathogens. The role of colonization resistance may be regulated by a variety of mechanisms, which is still unclear.

Recently, a research team from the National Institutes of Health published a titled “Cell”
The research results of “Infection trains the host for microbiota-enhanced resistance to pathogens” found that intestinal pathogenic bacteria infection can “train” the host’s bile acid metabolism and its products. Taurine in the intestines increases, enrichment can use taurine Acidic bacteria catalyze it to sulfide, thereby inhibiting the respiration of pathogenic bacteria and enhancing the colonization resistance of the flora. 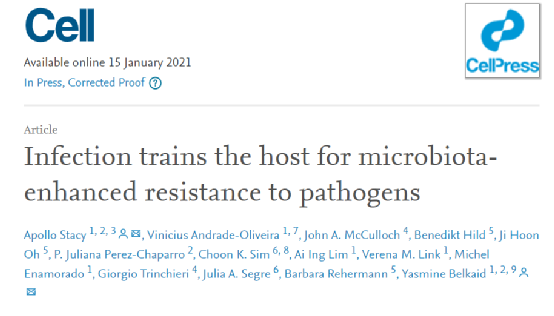 Previous studies have found that wild mice have stronger intestinal resistance to infection than laboratory mice. Therefore, researchers suspect that regular exposure to pathogens may benefit the microbiota to develop the best antibacterial function. They treated SPF mice (animals without specific pathogens), sterile mice transplanted with wild mouse flora (wildR mice), and attenuated strains of Yersinia pseudotuberculosis (ΔyopM, which can locally expand and induce intestinal Inflammation of the tract, which can be completely cleared within a few days after infection) SPF mice were infected with Klebsiella pneumoniae (Kpn). It was found that both wildR mice and ΔyopM mice showed greater resistance to Kpn than the control SPF mice. The resistance was enhanced, and the delta-proteobacteria and beta-proteobacteria in the intestinal flora of ΔyopM and wildR mice increased significantly. This indicates that previous intestinal infections will increase the resistance of microorganisms to subsequent infections. 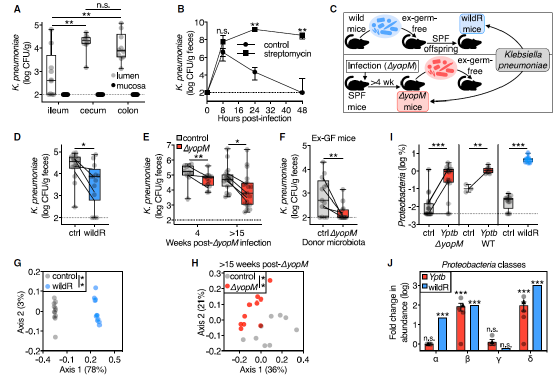 Afterwards, the researchers conducted a metagenomic analysis of the ΔyopM and wildR mouse flora and found that six of the shared functions of the metagenomics of the two groups of mice were annotated as participating in sulfur metabolism and menadione biosynthesis. The common feature of δ-Proteobacteria is the ability to use sulfur-containing compounds such as taurine or sulfate to obtain energy from anaerobic respiration. The main source of taurine in the intestine is bile acid.

Based on this, the researchers evaluated the activities of taurine-pyruvate aminotransferase (tpa) and sulfate adenylate transferase (sat) that catalyze taurine and sulfate, and analyzed the intestines after infection in each group of mice. Changes in the levels of metabolites and bile acids in the tract, it was found that the abundances of tpa, taurine, and bile acids were significantly increased in ΔyopM and wildR mice, which indicates that pathogenic infections can affect the host’s bile acid metabolism, leading to intestinal Taurine continues to increase, enabling the use of taurine to be enriched in delta-proteobacteria, resulting in colonization resistance. The hypothesis that elevated taurine will promote colonization resistance has also been verified in the enhancement experiment of mice resistance to Kpn and Citrobacter pestis after transplantation of taurine-treated mouse fecal flora. 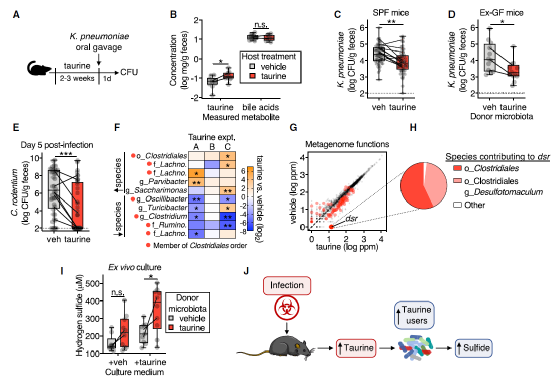 Because taurine has a wide range of metabolic pathways, the researchers also evaluated the ecological impact of taurine on other gut microbes and found that taurine supplementation and previous infections enriched the taurine metabolism in the gut microbes Members of the flora. 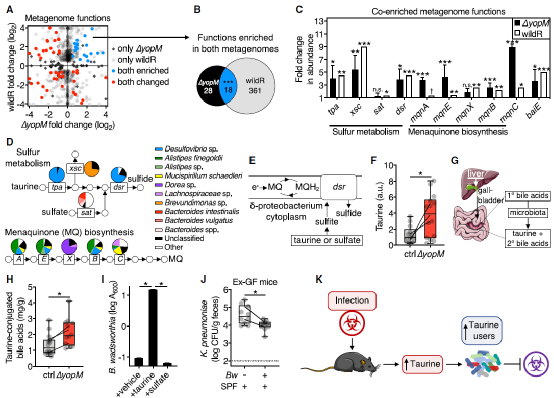 The main by-product of taurine metabolism is the toxic gas hydrogen sulfide. At high concentrations, hydrogen sulfide can inhibit the activity of the terminal enzyme cytochrome oxidase in the aerobic electron transport chain that pathogens rely on for growth. Researchers speculate that taurine can enhance the production of sulfide in the microbial community, thereby inhibiting the aerobic respiration of pathogens and playing a role in colonization resistance. This conjecture has also been verified by experiments, and it was found that the sulfide released by the intestinal flora of mice treated with sulfide chelating agent bismuth salicylate significantly reduced, and the aerobic respiratory flora such as Enterococcus faecalis and E. coli expanded , The composition of the microbiota is disturbed, and the resistance to Kpn is significantly weakened, which promotes the invasion of pathogens. 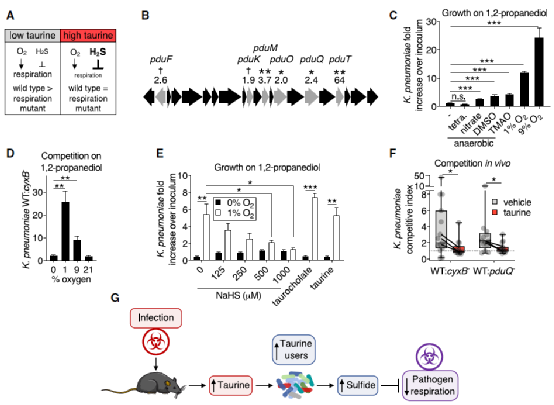 In short, the study reveals that after the host is infected with non-lethal pathogens, it is possible to increase taurine to enrich the intestinal microbiota for aerobic respiration and enhance its resistance to subsequent infections. This also reminds us that growing in a certain normal microbial environment is indeed conducive to the enhancement of resistance!