Merkel: Serbia vaccinates faster than the rest Europe due to Chinese COVID-19 vaccine

Merkel: Serbia vaccinates faster than the rest Europe due to Chinese COVID-19 vaccine. According to a Serbian news website “B92” reported on the 3rd, German Chancellor Merkel admitted in an interview with the German ARD TV station on the 2nd that with the “Chinese vaccine”, countries like Serbia are “vaccinating faster” than other European countries. . 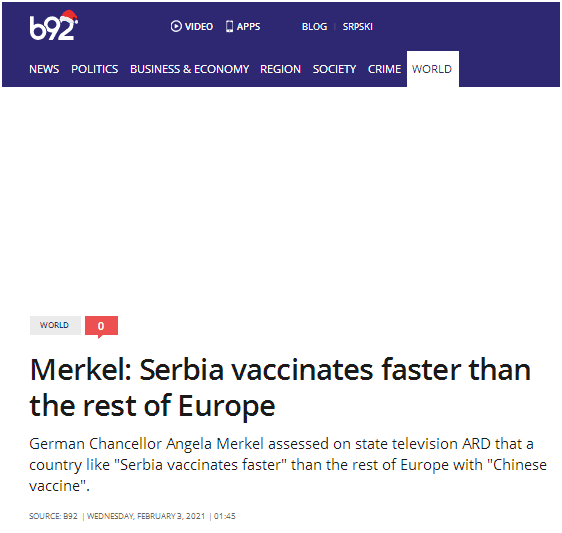 “B92” website: Merkel says Serbia is vaccinating faster than other European countries

“With the Chinese vaccine, Serbia’s vaccination rate is faster. We have always said that any vaccine licensed by the European Medicines Agency (EMA) is welcome.” Merkel replied. She also talked about Russian vaccines and said, “I talked with the Russian president and today I heard good news about Russian vaccines.”

Merkel also said: “The EU welcomes every vaccine, but only vaccines that provide EMA with all necessary data will be accepted.”

According to “B92”, the Merkel administration is being criticized for its slow actions compared to the relatively fast COVID-19 vaccination work in countries such as the United Kingdom or the United States. She also called on the Germans to “be patient for a while.” Merkel said: “We are fighting for trust in vaccines. As I said before, by the end of the third quarter, we will provide vaccines to all citizens.”

The British “Financial Times” said on the 2nd that after having been unable to wait for the vaccine to come to Europe, some Balkan countries eager to join the European Union have set their sights on the east. Among them, Serbia has the highest vaccination rate in Europe. French “Le Figaro” also previously stated that Serbia is not a member of the European Union, but has stable relations with Moscow and Beijing.

Serbia has a population of approximately 7 million, and has received 1 million doses of the Chinese National Medicine vaccine and started mass vaccination. According to the German News Agency, Merkel held a meeting with the governors of the federal states, vaccine manufacturers, and representatives of the European Commission on the afternoon of the 1st of this month to discuss how to solve the current shortage of vaccines. The governor of Bavaria Soder once again urged European regulators to “review Russia and China’s vaccines as soon as possible,” and if they prove to be safe and effective, they should be adopted.