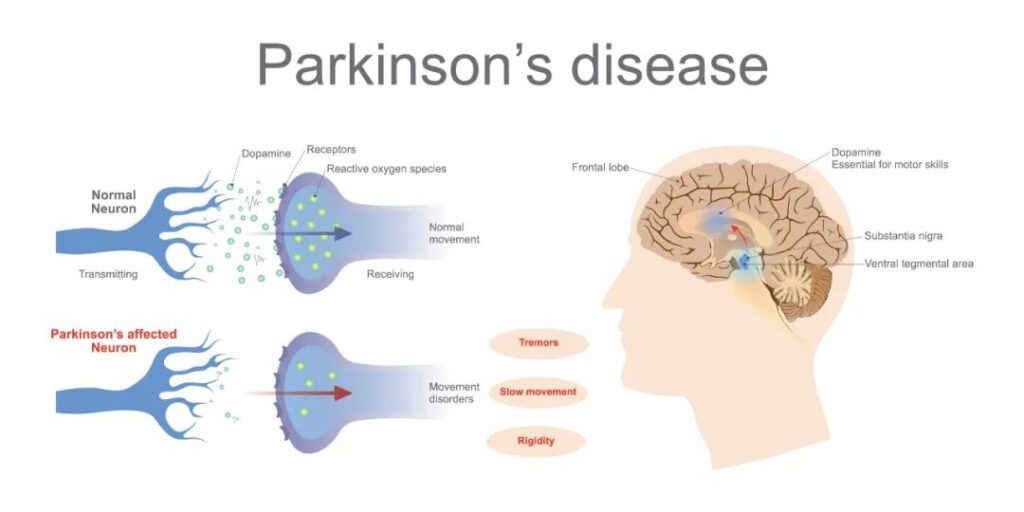 This study mainly revealed that the oxidative accumulation of phospholipids in dopaminergic neurons is an important pathological mechanism of Parkinson’s disease.

However, these death modes are not enough to explain the pathological process and mechanism. In-depth research has found that these death modes have a common feature, that is, the lipid peroxidation damage of dopaminergic neurons. The cell death method that can truly reflect the lipid peroxidation of cells is the newly discovered cell death method in recent years-iron death.

The team of Professor Rongrong He from Jinan University has long been concerned about the impact of emotional stress-induced cellular oxidative stress damage on the “susceptibility” of Parkinson’s disease, and proposed that the oxidation of dopaminergic neuron phospholipids may be an important pathological mechanism of Parkinson’s disease.

Professor Kagan’s research group has previously discovered that 15-LOX can be anchored to the cell membrane under the action of the partner molecule PEBP1, and specifically oxidize phosphatidylethanolamine (PE) to form oxidized phosphatidylethanolamine (ox-PE), of which the PE oxidation product 15 -HpETE-PE is an important signaling molecule for iron death in cells (Nat Chem Biol. 2017, 13:81-90; Cell. 2017, 171:628-641). In the process of cooperation, the two parties confirmed that the oxidation of dopaminergic neuron phospholipids is involved in the pathological process of Parkinson’s, and the mechanism is related to the ineffective repair of oxidized phospholipids.

To further explore the relationship between iPLA2β deficiency and iron death, the authors administered RSL3 to H109 and fPDR747W cells respectively to observe the changes in cell viability. When iPLA2β function is lost, cells are more sensitive to iron death caused by RSL3. This phenomenon has also been observed in iPLA2β protein knockdown and knockout cells, indicating that iPLA2β can inhibit iron death of cells to a certain extent.

In vitro enzyme activity experiments showed that the expression level of iPLA2β in the midbrain of mutant mice was unchanged, but the catalytic activity was significantly reduced.

In order to explore the relationship between phospholipid peroxidation and the pathogenesis of Parkinson’s disease, the researchers further established a murine model of Parkinson’s disease induced by rotenone and SCNA-A53T. The oxidized lipidomics analysis of the substantia nigra of rats induced by rotenone showed that ox-PE increased significantly.

When rotenone was continuously administered for 10-14 days, 15-HpETE-PE accumulated in the substantia nigra of rats, and iPLA2β activity was significantly reduced. The 8-month-old SncaA53T mouse model was studied, and it was found that 15-HpETE-PE accumulated in the midbrain of mutant mice, and the expression of iPLA2β was significantly reduced. The above results indicate that the accumulation of lipid peroxides caused by the loss of iPLA2β function also exists in other Parkinson’s disease models.

Using iPLA2β WT and R747W to catalyze the two substrates of non-oxidized phospholipid 1-SA-2-ETE-PE and oxidized phospholipid 1-SA-2-15-HpETE-PE in vitro, it was found that iPLA2β has a positive effect on 1-SA-2 The catalytic activity of -15-HpETE-PE is higher than that of 1-SA-2-ETE-PE, and when iPLA2β point mutation, the catalytic activity of this enzyme on 1-SA-2-15-HpETE-PE is greatly reduced. Similar results were also observed in fPDR747W mutant skin fibroblasts of patients with Parkinson’s disease.

In order to understand the mechanism by which mutations lead to the loss of iPLA2β function, computer simulations of the interaction of iPLA2β WT and R747W dimers with cell membrane phospholipids were further used (the figure below). After the wild-type protein is anchored to the cell membrane, the phospholipid easily enters the active pocket and is close to the active center site, which is beneficial to the enzyme-catalyzed reaction. After the protein is mutated, the active pocket is reduced, and the phospholipid is difficult to access the active center site, which hinders the enzymatic reaction. In addition, the mutant protein also produced a new binding conformation without catalytic activity. 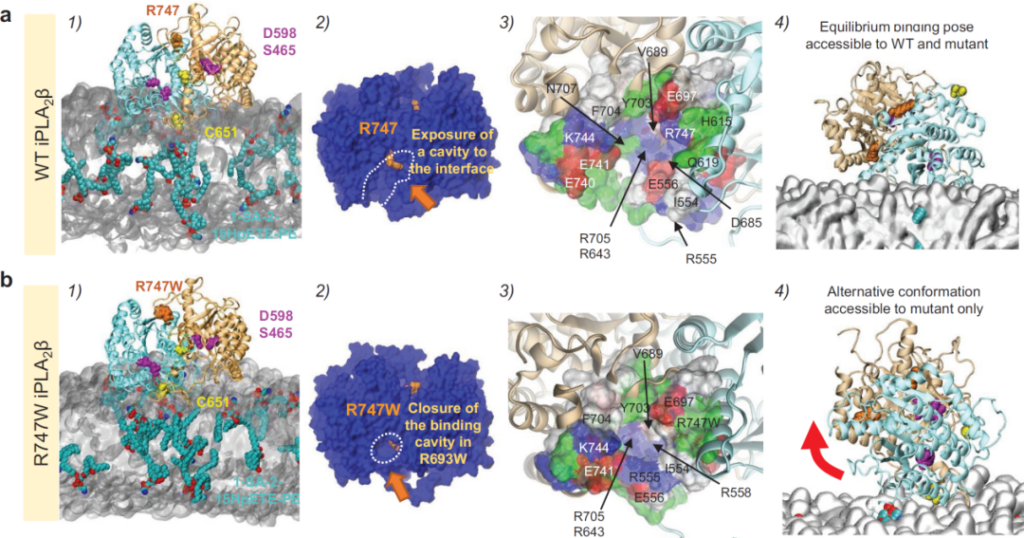 The mutation causes the conformational change of iPLA2β and cell membrane phospholipid binding, and the ability to enzymatically degrade oxidized phospholipid is reduced.