Aspartame (in beverages) may be related to autism

Most beverages contain aspartame, please be cautious. Haven’t heard of aspartame? It’s okay. Just go to the supermarket and find a bottle of sweetened beverage or food. Look at the “Ingredient List” on the package, and you will find the name of Aspartame, some of which are marked “Contains Phenylalanine” in parentheses. “.

The impact of aspartame on us is not small, especially for children with developmental problems, and more attention should be paid to it. Studies have shown that it may be related to autism.

It was discovered in 1965. In 1974, the United States was the first to approve the use. Later,  many countries in the world also began to use it. In 1996, the United States lifted restrictions on its use, allowing it to be used in any food and beverage.

When people gradually realized the negative impact of sugar on us, “sugar substitute” products appeared. Aspartame is one of them. It is a white crystalline powder, odorless (odorless), and has a refreshing sweetness. The taste is very similar to sucrose, and its sweetness is 200 times that of sucrose.

Many countries stipulates that it can be used in products such as cakes, ice cream, beverages, candies, biscuits, etc. The allowable amount varies from 0.3-10 g/kg depending on the specific food category [2].

Aspartame has been in dispute

In 1965, when chemist James M. Schlatter was conducting an experiment at GD Searle, he accidentally discovered that aspartame had a sweet taste;

In the fall of 1967, Dr. Waisman conducted experiments on 7 infant monkeys, 1 of whom died of S and 5 were epileptic;

In 1970, Dr. Olney, a researcher at GD Searle, pointed out in a report that aspartame is a major hazard to the human body;

In 1974, Aspartame was used in dried fruits in the United States;

In 1975, the U.S. Food and Drug Administration (FDA) re-examined GD Searle’s previous experiments and suspected that its experimental results were “manipulated”;

For the next eight years, the FDA refused to approve the use of aspartame until after President Reagan took office, he fired the disapproved FDA committee and appointed Dr. Hayes as the FDA secretary. Soon after, aspartame was approved for use. But Minister Hayes was revealed to have received benefits and resigned, and then blatantly transferred to GD Searle (found aspartame and hold more than 70 production patents).

In 1991, the National Institutes of Health issued a warning about the toxicity of aspartame and attached 167 harms.

In 1994, the US Department of Health and Human Services released details of 88 symptoms caused by aspartame toxicity, including depression, mental retardation, brain tumors, epilepsy, Parkinson’s and Alzheimer’s.

The influence mechanism of aspartame on children’s development

Aspartame itself is non-toxic, but it is metabolized and broken down in the body into aspartic acid (40%), methanol (10%) and phenylalanine (50%).

Methanol is a blinding neurotoxin. It is then decomposed into formaldehyde, which can cause cancer. Formaldehyde is absorbed by various body tissues. The formaldehyde is then oxidized to formic acid.

Aspartic acid is a stimulating toxin that stimulates the death of nerve cells.

Phenylalanine is an amino acid from natural foods, but when phenylalanine exists in its own form, it can cause convulsions or convulsions in nearly 15% of people who are allergic to it.

When passing through the blood-brain barrier, it changes the original amino acid ratio of the brain, thereby interfering with neurotransmitter transmission.

In addition, a large amount of phenylalanine ingested at one time can cause permanent brain damage and even death. 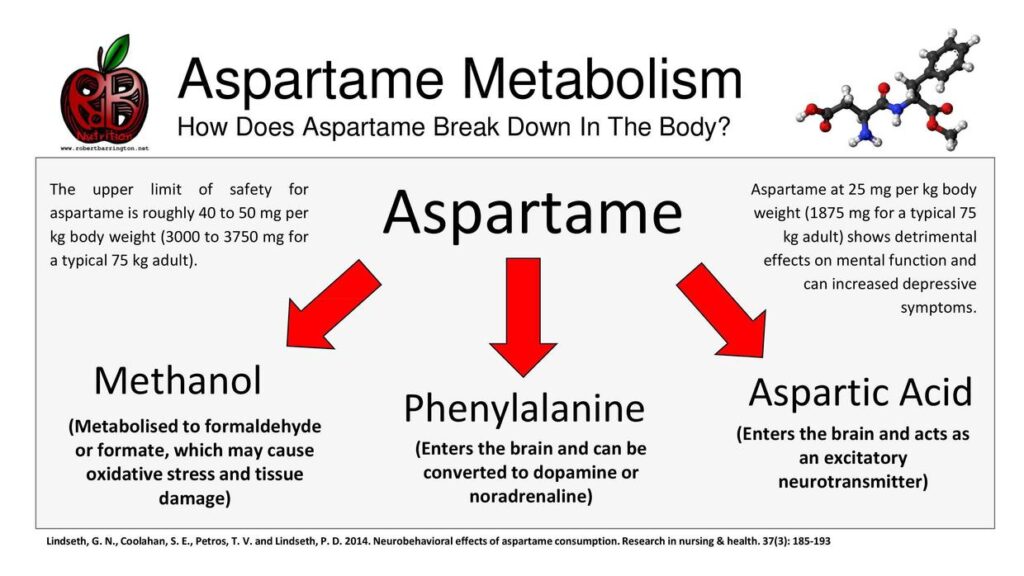 The three metabolites of aspartame are too powerful, all of them are directed at the nervous system! If there is a disorder or problem in the nervous system, it will be reflected in behavior, emotion, language, and cognition, which is developmental delay or one of the causes of autism.

Some people often say that the dosage is within a safe range, and there is no problem with drinking a small amount. I also know this truth, but the objects we are discussing are children with developmental delay and autism.

The common characteristics of this group are: low immunity, poor metabolism, and poor detoxification ability. For these children, what dosage is Is it safe?

People who drink a lot of alcohol can drink three catties of white wine at a time. What about those who can’t drink? I’m afraid that a glass of beer will blush!

Therefore, I recommend that pregnant mothers and children with developmental problems never drink; for normal children, they should also drink less, after all, there are risks!