A retroviral infection 50000 years ago caused a high incidence of koala cancer.

Koalas (scientific name: Phascolarctos cinereus), spend almost their entire lives in trees. Most of their daytime is either sleeping or sitting still, and less than 10% of their time is spent foraging. He has a fat body, messy and thick hair, and no tail. The adult koala is about 70-80 cm long and weighs about 10 kg.

The koala is Australia’s national treasure and a peculiar and precious primitive arboreal animal in Australia. It was ranked 15th on the list of the world’s cutest species selected by CNN in 2013.

However, this cute animal has a long life. In recent years, koalas have suffered serious health problems (such as fatal virus infections, chlamydia infections) and serious environmental problems, and their habitats have been extensively destroyed, especially in Australia recently. Wildfires have caused the loss of 80% of the koala’s natural habitat.

In addition, koalas have a high incidence of lymphoma, leukemia, and other cancers, but the specific reasons are still unclear.

The study showed that about 50,000 years ago, a virus called Koala Retrovirus (KoRV) infected koala’s egg cells or sperm and integrated in its genome, resulting in every koala’s offspring’s body. Each cell carries this retrovirus. These retroviruses, which are still highly active, in the process of frequent replication and integration, put a high load of gene mutation pressure on the koala genome, thereby inducing the koala’s cancer. High incidence.

In fact, all animals have experienced similar “retroviral” infections at some point in their evolutionary history, resulting in the inclusion of many ancient retroviruses in their genomes. For example, in humans, about 8% of the genome comes from retroviruses.

These retroviruses are often millions of years old, and thus become an inactive form, which is no longer harmful to the host.

Since this process of retrovirus infection and integration into the genome has occurred in most animal species millions of years ago, the direct health effects on the host at the time of infection were unclear, but scientists believe that, In the initial stages of infection, the invasion of the genome by retroviruses may have considerable harmful effects on health.

Because retroviral infection can cause cancer, it is believed that there is a link between Koala Retrovirus (KoRV) and the high frequency of lymphoma, leukemia and other cancers in Australian koalas.

To investigate this connection, the research team performed DNA sequencing on wild koalas with cancer to accurately detect the copy number of KoRV in the koala genome and determine the exact position of these retroviruses inserted in the koala genome. . 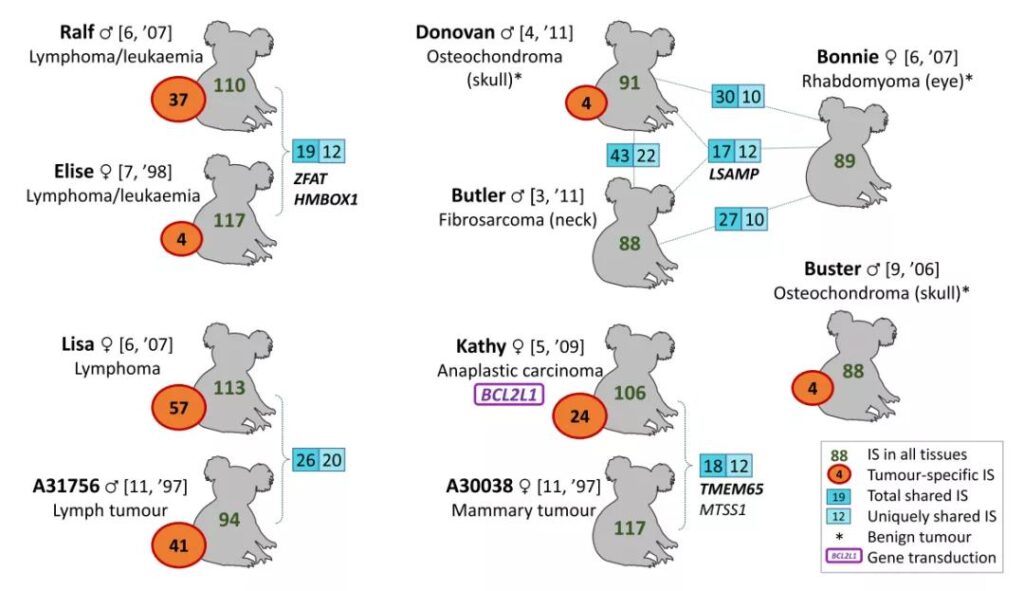 The test results found that each koala’s genome carries approximately 80-100 copies of the koala retrovirus (KoRV). Most of the genomic positions are not shared among koalas, which indicates the rapid expansion and accumulation of KoRV copies in the koala population.

Every time a retrovirus replicates itself and reinserts into the host genome, it will cause host gene mutations and may disrupt its gene expression, which may be harmful to the host. These test results indicate that the Koala Retrovirus (KoRV) is frequently copying and integrating its own genome into the koala genome, which brings a high genetic mutation load to the koala.

The tumor tissue of these cancerous koalas contains many new Koala retrovirus (KoRV) copies, indicating that KoRV is more active in tumor cells, and these copies are usually located near cancer-related genes. The newly inserted KoRV in the tumor tissue will affect the expression of nearby genes. This change in the expression of cancer-related genes can cause the increase of cell growth and proliferation, leading to tumors.

Comparing the koala retrovirus (KoRV) genome location between koalas also shows that KoRV may make related koalas susceptible to specific tumors because koalas share KoRV insertions in specific cancer-related genes. These genes It is related to a specific type of cancer and can be passed on to its offspring.

In all the koalas studied, there are “hot spots” in their genomes, which are often inserted sites of Koala Retrovirus (KoRV). These hot spots are also located near genes related to cancer.

In general, the study found that the expression of multiple cancer-related genes in koalas at the genome level is associated with Koala retrovirus (KoRV) infection, revealing the reasons for the high incidence of koala cancers. Although there may be other factors that cause the high incidence of koala cancer, the retroviral infection that occurred 50,000 years ago, the virus genome is still in the active stage, and the virus genome is actively replicating and integrating, which greatly increases the koala gene mutation And the frequency of cell canceration, and may shorten the time of its cancer development.

In addition, the author of the paper also stated that previous studies have found that the older retroviruses in koalas contribute to the degradation and dormancy of current retroviruses. In other words, the koala is in a race to survive in the retrovirus.

In addition to the health problems of high incidence of cancer, the koala’s living environment is undergoing more severe tests. Since September 2019, Australia is experiencing the worst wildfire in history. The fire has destroyed 80% of the koala’s natural habitat. Thousands of koalas have been buried in a sea of ​​flames. In addition to the sharp decline in habitat, the difficulty of restoring burned forests, as well as the threat of climate change and disease, the number of koalas in Australia is substantial. Decrease, is facing functional extinction.