Oncogenes are genes that can cause cancer

Oncogenes are genes that can cause cancer.   The World Health Organization defines cancer as: Cancer is a genetic disease, which includes a large group of diseases that can affect all parts of the body.

Oncogenes are genes that can cause cancer.   Oncogenes usually encode proteins that control cell growth and survival, but mutations in these genes may cause oncogenes to not work properly, and these genes can also be activated and inactivated.

This may lead to uncontrolled growth of cells, which can lead to the occurrence of cancer. Let’s give an example of an oncogene, such as BRAF, which encodes a protein involved in cell growth and survival.

In cancers, most mutations in this gene will cause cells to continue to grow. Mutations in oncogenes may be inherited from parents (germline mutations), or they may be caused by certain substances in the environment (systemic mutations)

The World Health Organization defines cancer as: Cancer is a genetic disease, which includes a large group of diseases that can affect all parts of the body.

An important feature of cancer is that it can quickly produce abnormally spreading cells (i.e. cancer cells); these cells are not controlled by normal boundaries and can invade other parts (i.e. metastases), and the latter is the main cause of death in cancer patients.

Since the abnormality of tumor cells is caused by its gene mutation, the oncogene should have the following characteristics:

1) Genes have mutations during the development of cancer;

3) Unlike the exogenous nature of the virus, the oncogene should be endogenous in the cell. 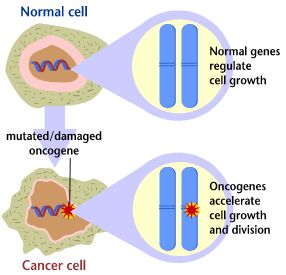 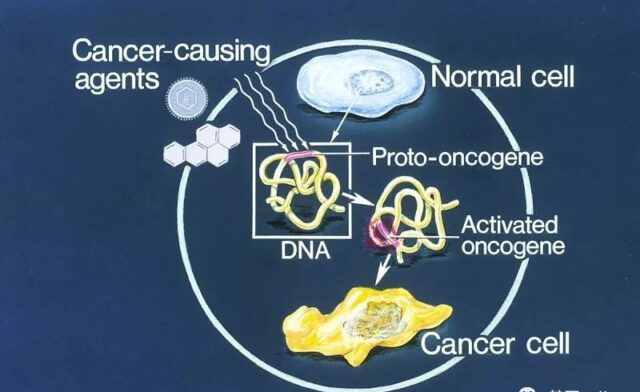 The development of tumors is a multi-level process. Normal cells have to go through a series of intermediate transitional stages before forming malignant tumors, and a mutation of an oncogene is generally not enough to cause such changes. So people have established a multipolar tumorigenesis model.

It is believed that a tumor cell has two or more mutated oncogenes, which are activated at different stages of tumor development, and at the same time, people realize the other factors in tumorigenesis. An important class of mutation targets are tumor suppressor genes (these genes prevent cancer from occurring).

The activation of oncogenes and the inactivation of tumor suppressor genes are similar to a car with accelerator and brake failure. As a result, it quickly drives toward the end of cancer. 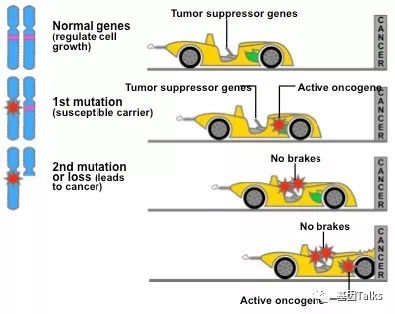 As mentioned earlier, abnormalities in tumor cells are caused by genetic mutations. In fact, in one generation of cells, the probability of mutation is very low; in addition, cell cancer requires multiple mutations such as oncogenes and tumor suppressor genes, so the probability of tumor occurrence is even lower.

A hereditary tumor is because it has a mutated gene, which is equivalent to reducing an obstacle to tumor occurrence, thus greatly increasing the probability of tumor occurrence. In addition, there is another way to accelerate the process of tumorigenesis: that is, increase the frequency of mutations!

Xeroderma pigmentosum (XP) is a disease that increases the frequency of mutations to increase the probability of cancer. XP patients are very sensitive to ultraviolet radiation and can easily cause skin cancer in the irradiated area.

The reason is that UV radiation can cause DNA damage to skin cells. In normal people, this type of damage can be repaired by a type of DNA repair protein; and XP patients have defects in this type of protein, so they cannot repair the DNA damage caused by UV radiation. , Thereby greatly increasing the frequency of cell mutations.

The normal DNA damage repair system can repair a variety of DNA damages, including those caused by mutagens and carcinogens in the environment. If these gene mutations cause loss of function, DNA repair will not proceed normally, and the damaged DNA will increase the mutation rate exponentially when it is replicated, causing the accumulation of oncogene or tumor suppressor gene mutations, thereby accelerating tumor formation.

1. Oncogenes. The functions of these genes are mostly related to cell growth signal pathways. Mutations cause their protein products to be inactivated or activated, which stimulates cells to grow uncontrollably and become cancerous;

2. Tumor suppressor genes. The function of these genes is usually to maintain the accuracy of replication in the cell cycle. It usually requires mutations in both alleles to lose the inhibition of cancer;

3. DNA damage repair genes. These genes can repair a variety of DNA damages. When they are mutated, they will lose the repair function of DNA, which greatly increases the mutation rate of genes including oncogenes and tumor suppressor genes, thereby accelerating cancer. form. (Partially the same as tumor suppressor gene).