B cells are not bystanders in the tumor microenvironment

In the past decade, the role of T cells in tumor immune surveillance has been extensively studied, while research on B cells is relatively rare.

Some studies have shown that the presence and function of B cells can be regarded as an important prognostic factor for cancer. In addition, plasma cells infiltrate the tumor site, and even a small number of cells can produce large amounts of cytokines and antibodies. These antibodies can promote anti-tumor immunity by driving antibody-dependent cellular cytotoxicity (ADCC) and phagocytosis, complement activation, and enhancing antigen presentation by dendritic cells.

In addition, B cells themselves can present antigens to CD4+ and CD8+ T cells, thereby forming an antigen-specific immune response in the tumor microenvironment.

B cells also contribute to the formation of tumor-associated tertiary lymphoid structures (TLS). TLS supports the further maturation and subtype switching of tumor-specific B cells, as well as the development of tumor-specific T cell responses.

At the same time, tumor-infiltrating B cells may have both tumor-promoting and anti-tumor effects, depending on the composition of the tumor microenvironment, the phenotype of the B cells and the antibodies they produce.
Compilation | Little Medicine Says Medicine

1. The function of B cells

B cells can concentrate on the edge of the tumor or form a variety of complex tumor-related immune aggregates, from small unorganized clusters to structured TLS. The cell composition of this structure may vary greatly due to the stage and origin of the tumor and other factors, and has prognostic value for various metastatic and primary tumors.

In particular, in TLS and tumor-infiltrating lymphocyte populations, the antigen-specific interaction between T cells and B cells seems to be crucial, and the anti-tumor effect of T cells in the tumor microenvironment usually depends on the interaction with B cells. Cooperation.

Intratumoral antibodies were first discovered in the 1970s. In 1996, the presence of IgA1 in primary breast cancer and its metastatic lesions was reported.

These plasma cells may exist locally and produce high titers of tumor-specific antibodies, such as breast cancer, melanoma, and high-grade serous ovarian cancer. These antibodies can mediate the tumor cell killing effect of ADCC and CDC, or promote the phagocytosis of tumor cells by antibody-mediated macrophages and granulocytes.

Cancer-promoting effects of B cells and antibodies

Including human cancers, high levels of B cell and/or plasma cell infiltration into tumors are associated with increased invasiveness of bladder cancer. High plasma cell and CD138+ B cell infiltration rates in patients with invasive breast cancer are also associated with shorter recurrence-free survival Rate related. The tumor-promoting effects of B cells are usually related to the existence of immunosuppressive B cell subsets (Breg). 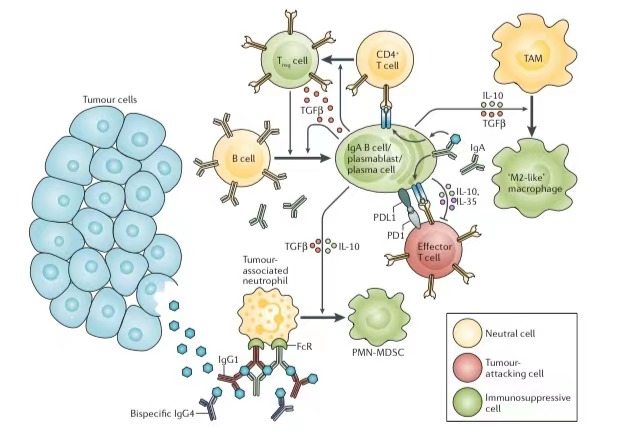 Tumor-specific antibodies produced locally or systemically may also drive tumorigenic effects. In particular, it has been observed that persistent immune complexes formed by tumor-specific antibodies may be associated with unfavorable clinical outcomes, which may be due to modulation of the activity of myeloid cells carrying Fc receptors.

In conclusion, there is sufficient evidence that, in some cases, tumor-infiltrating B cells, plasma cells, and locally produced antibodies may produce significant immunosuppressive effects, thereby protecting tumors from immune-mediated elimination.

An important determinant of whether an antibody has a tumor-promoting or anti-tumor effect is the existence of antibody subtypes.

Human IgG1 antibodies: From the perspective of anti-tumor cytotoxicity, human IgG1 antibodies are the most important, because these antibodies can bind to Fcγ receptors (FcγR), trigger ADCC and antibody-mediated phagocytosis, and mediate complement Cytotoxicity. In addition, FcγR expressed on dendritic cells and macrophages can capture IgG-bound tumor antigens and provide these antigen-derived peptides to T cells. 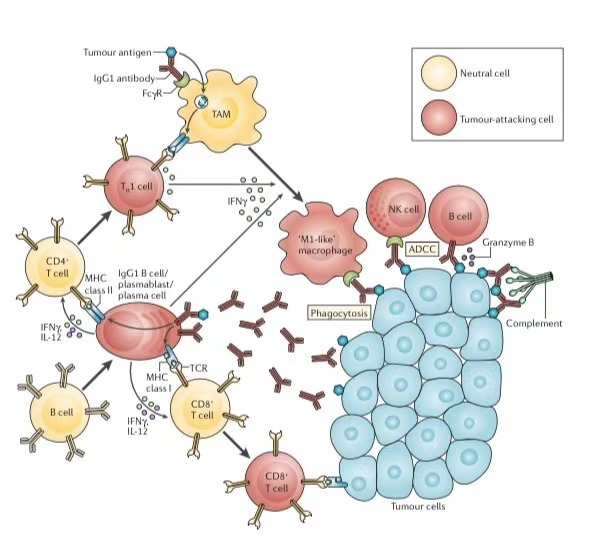 In certain cancer types, IgG4 also has a positive effect. The explanation is not clear. It may be related to the inability of IgG4 to form immune complexes, which can stimulate chronic inflammation and tissue remodeling processes, and ultimately induce immunosuppressive myeloid cell phenotypes .

IgG3 antibodies: Although both IgG1 and IgG3 can trigger ADCC, phagocytosis, complement activation, and antigen cross-presentation, in contrast to IgG1, IgG3 has a neutral or negative correlation with the survival rate of melanoma patients. One possible explanation is that although IgG3 antibodies can interact with activated Fc receptors, there is evidence that this effect is early and short-lived, and IgG3 antibodies generally have a lower number of cumulative hypermutations and lower Affinity. 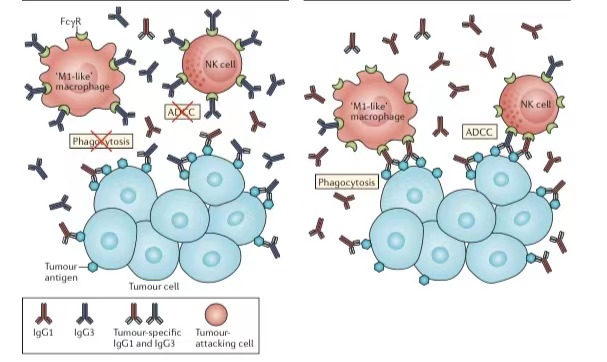 In view of the tumor-promoting effect of B cells, the use of B-cell depleted anti-CD20 antibodies, such as rituximab or ovazumab, has been studied as a treatment for solid tumors. However, clinical data show that after IL-2 treatment of metastatic renal cell carcinoma and melanoma, rituximab neoadjuvant therapy has no effect.

Several other clinical trials (NCT01032122 and NCT02142335) were terminated or completed without reporting results. Another trial of rituximab in the treatment of solid tumors is underway, with the goal of eliminating tumor-infiltrating B cells in prostate cancer (NCT01804712).

Small molecule drugs such as Ibrutinib are another option for suppressing B cells. Ibrutinib targets BTK, which is a key mediator for B cell receptors and other receptors (FcγRs, Toll-like receptors, G protein-coupled receptors) and B cell survival, migration and differentiation into plasma cells. Ibrutinib has been used as a monotherapy or in combination with other therapies in clinical trials for the treatment of various solid tumors, but the role of B cells in it is unclear.

In short, existing studies have shown that total B cell depletion may be an anti-tumor intervention, but its scope of application may be limited to very special populations where B cells play a significant negative role.

4. B cells in tumor immunotherapy

Considering that ADCC is one of the direct mechanisms of antigen-specific anti-tumor B cell response, drugs that stimulate NK cells, such as the monoclonal antibody monalizumab of NKG2A, can help to produce more pronounced responses to patients with high IgG1 plasma cells.

Due to the synergistic effect of B and T cells and B and NK cells, B cells may promote PD-1 blocking therapy. In the neoadjuvant anti-PD-1 treatment of non-small cell lung cancer, immune-mediated tumor clearance is related to the local formation of TLS and the presence of plasma cells.

In summary, B cells are not just bystanders in the tumor microenvironment, but also active participants that can fundamentally coordinate the immune response. B cells can resist tumors under certain conditions, mainly by producing tumor-specific antibodies and presenting tumor antigens, but certain B cell subgroups and specific antibodies can also inhibit anti-tumor immunity and promote tumor growth.

The ambiguous role of B cells in the tumor environment determines the different directions of immunotherapy methods, either to activate positive B cells or inhibit negative B cell types. Therefore, the application of B-cell targeted therapy or the combination with other therapies should be based on an in-depth understanding of the B-cell spectrum-each cancer subtype or even each patient.

The ability to analyze, rationally interpret, and use immunoglobulin profile data from tumor-associated B cells is becoming an important part of this story.