The aging of the population is a major social problem facing some countries and the world at present. With the increase of age, the normal body appears to be aging, and the aging of the immune system is one of the prominent and important problems, and it is also prone to chronic inflammation in elderly individuals. An important cause of autoimmune diseases.

T cell-mediated adaptive immunity is a key driving force for the body to induce autoimmune inflammation. Although thymus atrophy caused by aging will reduce the initial T cell output, the number of peripheral T cells in the elderly does not decrease. The reason is Peripheral T cells undergo steady-state proliferation and activation in the state of senescence. However, the academic community is still not clear about the specific regulatory mechanism that aging induces the steady-state proliferation of T cells and promotes the occurrence and development of autoimmune inflammation.

The study found that there is a large amount of DNA accumulation in the cytoplasm of CD4+ T cells in old mice and humans, and this accumulated DNA will promote the proliferation and activation of CD4+ T cells induced by TCR, indicating that T cells themselves can sense through DNA And promote its functional activation.

The researchers found through mass spectrometry combined with western blotting that the cytoplasmic DNA in T cells is not bound to cGAS, but to the KU complex (KU70/KU80). If the small molecule inhibitor STL127705 is used to block the binding of KU complex to DNA, it will significantly inhibit the proliferation and activation of CD4+ T cells induced by DNA, thereby alleviating the occurrence and development of autoimmune inflammation in old mice, indicating that DNA-induced T cell function activation is indeed mediated by DNA sensing through the KU complex.

In order to explore therapeutic strategies that interfere with this newly discovered DNA sensing pathway to suppress aging-related autoimmune inflammation, researchers used calorie restriction (CR) or simulated intermittent feeding (FMD) to treat elderly mice and found these two dieting patterns Both can significantly reduce the DNA damage and cytoplasmic DNA accumulation of CD4+ T cells in old mice, thereby inhibiting the phosphorylation of ZAK-T169 and the activation of downstream AKT/mTOR signals, and finally inhibiting the activation of CD4+ T cells and aging-related self Symptoms of immune disease.

Furthermore, based on the key protein kinase ZAK identified in the DNA sensing pathway, the researchers used deep learning combined with molecular simulation methods to screen from approximately 130,000 compound libraries to obtain a small molecule compound iZAK2 that can specifically inhibit the activity of ZAK kinase. It was found that iZAK2 can effectively inhibit DNA-induced CD4+ T cell proliferation and activation, thereby alleviating the pathological symptoms of autoimmune diseases in elderly mice. 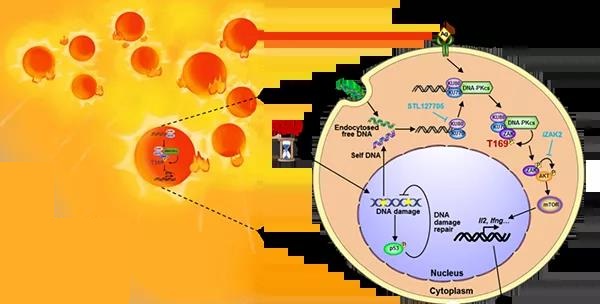 In summary, this study revealed that cGAS/STING-independent DNA sensing signaling pathways in senescent CD4+ T cells can promote the activation and proliferation of T cells and lead to the occurrence and development of aging-related autoimmune diseases. Further research and development of inhibitors that block DNA sensing signal transduction in T cells may be beneficial for clinical treatment of aging-related autoimmune diseases.