Pancreatic beta cells can secrete insulin, which has the function of lowering blood sugar. Insulin and glucagon secreted by pancreatic alpha cells work together to maintain blood glucose homeostasis in the body. Diabetes is a metabolic disease with high blood sugar as its main symptom. It has many complications, including heart attack, stroke, kidney failure, blindness, and amputation. It has become a serious killer that threatens human health and has caused huge Medical burden.

Therefore, elucidating the source of pancreatic islet beta cells in homeostasis and different pathological states can provide a new research direction for the clinical treatment of diabetes, which has important scientific significance.

On March 16, the international academic journal Nature Metabolism published online the research results of Zhou Bin’s research group at the Center for Excellence in Molecular Cell Science (Institute of Biochemistry and Cell Biology) of the Chinese Academy of Sciences “Pre-existing beta cells but not progenitors contribute to new beta” cells in the adult pancreas”.

Zhou Bin’s research group has long been committed to the development and application of new genetic lineage tracing technology. In this research, they established a new double homologous recombination-mediated lineage tracing that can simultaneously label pancreatic islet beta cells and non-beta cells. New system. Based on the Dre-rox and Cre-loxP double homologous recombinase-mediated genetic lineage tracing technology (He et al., Nature Medicine 2017) developed by the research group in the early stage, researchers break through the previous research model and no longer rely on A single molecular marker tracks the differentiation of a certain group of cells, but simultaneously and irreversibly distinguishes and marks all beta cells and all other non-beta cells that may contain potential stem cells.

The researchers used the cross-type reporter mouse IR1 of Cre-loxP and Dre-rox, an orthogonal site-specific double homologous recombination system constructed in the laboratory. In IR1 reporter mice, two pairs of recombination recognition sites (rox and loxP) are arranged in a staggered arrangement, so that a successful recombination can induce the expression of one genetic reporter gene and also prevent the occurrence of another recombination. This design can use two different permanent genetic markers to simultaneously distinguish and label beta cells and non-beta cells: tdTomato and ZsGreen.

The researchers first studied the source of beta cells during the physiological homeostasis of the adult pancreas. They induced Dox on 6-week-old Ins2-Dre; R26-iCre; IR1 mice for 1 week, and then analyzed the pancreas after 3 or 6 months. Tissue, tissue fluorescence detection can see that the entire pancreatic tissue is labeled as ZsGreen, with a positive signal of tdTomato in the middle. It was found by section staining that pancreatic islet beta cells were still labeled as tdTomato, and no ZsGreen-positive beta cells were found, indicating that under physiological steady-state conditions, beta cells mainly come from the self-replication of existing beta cells. 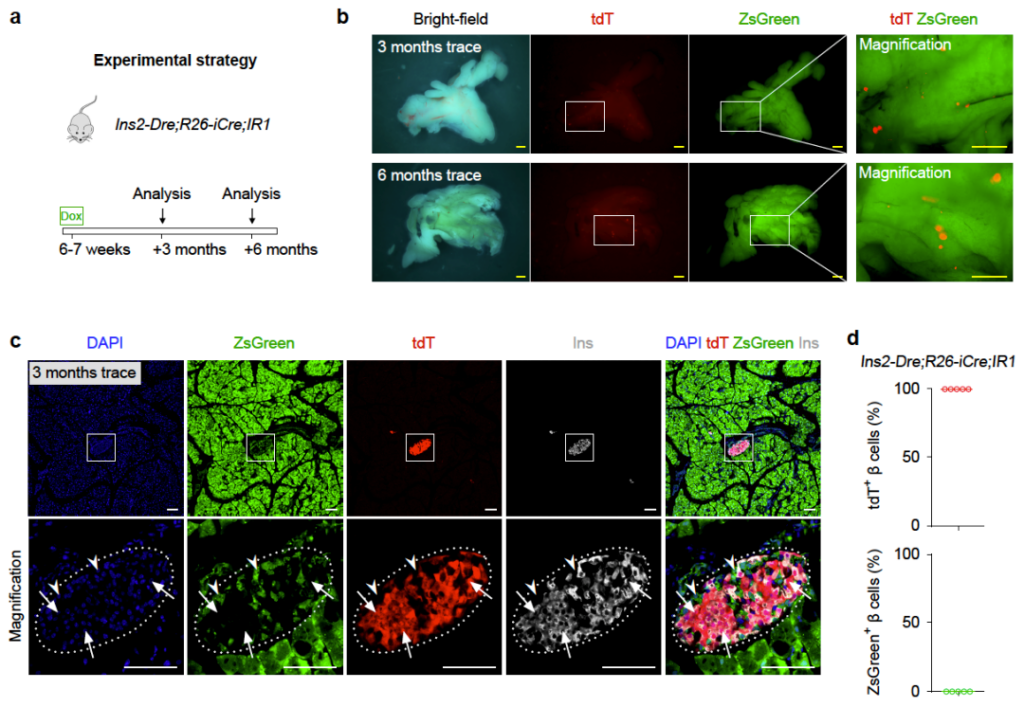 The researchers also constructed a model of partial pancreas resection and pregnancy-mediated islet beta cell regeneration, a pancreatic duct ligation model, a streptozotocin-mediated diabetes model, etc. None of these non-genetic manipulation injury models found ZsGreen positive The cells express Insulin. In addition, a new diphtheria toxin-mediated cell clearance of mouse IR1-DTR was constructed. Ins2-Dre; R26-iCre; IR1-DTR mice were injected with diphtheria toxin. The researchers found that the majority of beta cells were eliminated (> In 99%) cases, a small number of ZsGreen-positive cells can be found expressing Insulin after a period of recovery, indicating that even if a small number of Insulin-positive cells are contributed by non-beta cells, the system can also be captured, proving the effectiveness of the tracking system.

The researchers constructed a new specifically inducible Ins2-DreER knock-in mouse strain and a reporter gene tool mouse H11-rox-tdTomato targeting the Hipp11 (H11) locus. In the adult stage, beta cells are induced by tamoxifen for genetic labeling (tdTomato), then other non-beta cells are negative for tdTomato. After a period of time, if there are tdTomato-negative non-beta contributions to produce new beta cells, they will express Insulin, because at this time there is no tamoxifen to play a role and will not be marked by tdTomato. The accuracy of this strategy largely depends on the efficiency of beta cell induction and labeling. If the saturation of the beta cell marker is very close to 100% (such as 99.9%), when the percentage of tdTomato-negative beta cells increases significantly (over 0.1%), it can be explained that new beta cells are generated from stem cells.

The researchers used this efficient and specific inducible beta cell tracing system to study the source of beta cells under different physiological and pathological conditions, and once again confirmed that beta cells are mainly derived from the self-replication of existing beta cells.

The  highlight of this study is the development of a new double homologous recombinase-mediated lineage tracing technology to study the source of adult pancreatic islet beta cells.

Breaking through the traditional thinking mode and technical limitations, it is possible to not rely on the specific markers of beta cell stem/progenitor cells, and at the same time and irreversibly distinguish pancreatic islet beta cells from non-beta cells, and find that adult beta cells are produced under different physiological and injured states Mainly comes from self-replication, not stem cell differentiation.

The newly constructed series of genetic tool mice can provide strong technical support for the development, disease, and regeneration of pancreatic beta cells and other tissues and organs. The research results can provide an important theoretical basis and new research directions for the clinical treatment of diabetes.