Could COVID-19 mutant strain cause a “plague” if rodents were infected?

Could COVID-19 mutant strain cause a “plague” if rodents were infected?  A French study found that the new coronavirus mutant strains currently emerging in South Africa and Brazil can infect rodents [1]. 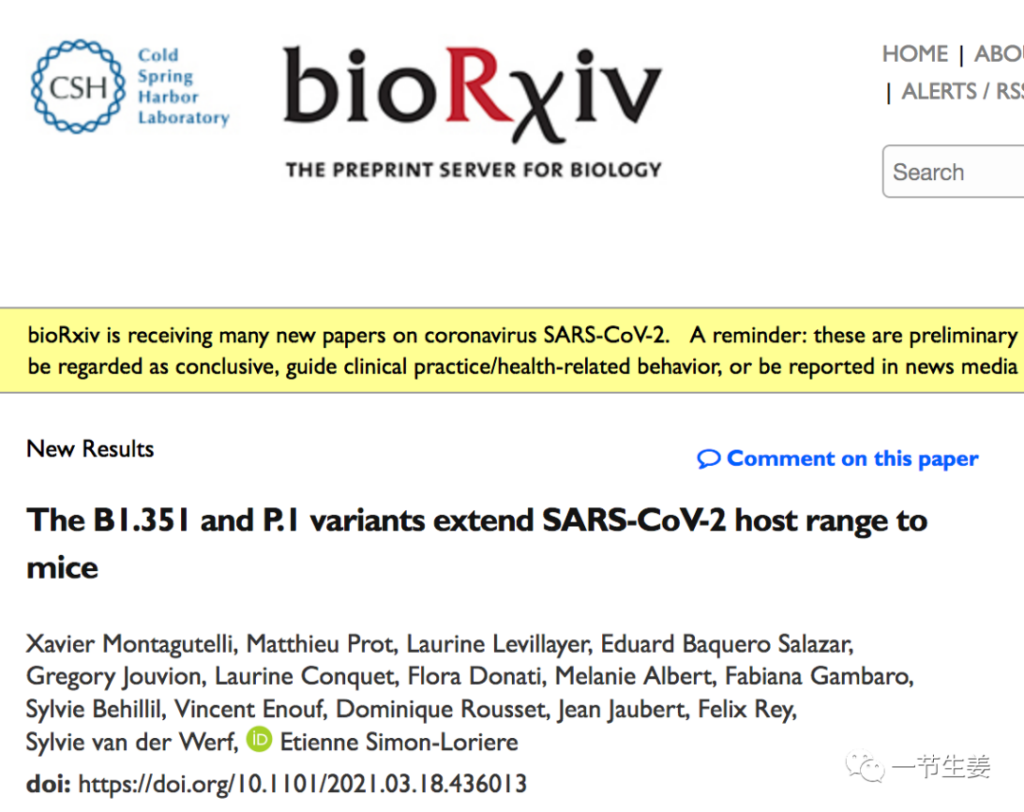 The two mutant strains are B.1.351 and P.1 respectively. First of all, let me remind you that the reason why the new coronavirus can infect human cells is because the virus’s “spike” protein can bind to the ACE2 receptor on human cells.

French scientists first used mouse cells to conduct experiments. This cell expresses the mouse ACE2 receptor. The experiment showed that the general new coronavirus does not infect, but three mutant strains currently circulating, including the British B.1.1.7, B.1.1.7 and B. 1.351 and Brazil’s P.1 can be infected, of which Brazil’s P.1 has the strongest infectivity, which is basically the same as the ability to infect cells expressing human ACE2 receptors.

This experiment on infected cells has a flaw: because this cell is artificially modified, although it is a mouse cell, it expresses a large amount of mouse ACE2 receptor, which is higher than the normal expression level, and may not reflect the natural infection state.

Therefore, French scientists directly used two kinds of mice commonly used in laboratories to conduct experiments and found that the British B.1.1.7 strain has weaker infection ability, but the B.1.351 and P.1 strains can indeed infect mice. Pathological biopsy of the lungs of mice infected with the virus revealed immune cells related to inflammation.

It was previously discovered that the new coronavirus can infect dogs, cats, minks, tigers, and lions. Now, the mutated virus can infect mice. What does this mean? Will it cause a “plague”?

1.  Will the human new coronavirus be transmitted to mice?

Compared with pets such as cats and dogs, the relationship between humans and mice is not so close. The previous virus can infect cats and dogs, and it did not make the epidemic uncontrollable. After strict prevention and control, the epidemic was also controlled. Someone Maybe you think you can infect mice now, and it’s no big deal.

But this is an illusion.

At present, it can be said with certainty that the virus can exist in sewage for a longer period of time in areas with high epidemics. Therefore, rodents who often walk in sewage will inevitably be infected with the virus.

Compared with large animals such as cats and dogs, mice are a species that is difficult to control. Humans enter the country through customs, and now they have to have nucleic acid testing and antibody testing certificates, and they will also be quarantined. Pets entering the country with passengers must not only have formal quarantine certificates, but also need to be quarantined in some cases.

Therefore, once mice can be infected with the COVID-19 virus, the epidemic will be more difficult to control, even in countries that can strictly guard against it.

If the Brazilian government sees the results of this study, it should catch some wild mice for testing as soon as possible to see if the epidemic has spread among the mice.

The plague spread by rats, the pathogen is Yersinia pestis, which is a kind of bacteria.

In human history, there have been three recorded rat plagues. The first occurred in the 6th century AD, and it was introduced into Europe from the Mediterranean area, and nearly 100 million people died; the second occurred in the 14th century, and the epidemic lasted for 300 years. At that time, it was called the Black Death and directly reduced the European population by three. One part, however, Europe, which has been purged by the Black Death, also ushered in the Renaissance; the third plague began in Yunnan during the Qing Xianfeng period and lasted from 1890 to 1930, affecting more than 60 countries. Tens of millions of people died.

Because the pathogen of the plague is bacteria, after the invention of antibiotics, no large-scale plague appeared. However, the pathogen that caused the plague has not disappeared. In both 2019 and 2020, cases of Yersinia pestis infection have appeared in Inner Mongolia. Because of the rapid response of the CDC, no large-scale infection has occurred.

Now that mutants of the new coronavirus can infect mice, will it bring a new type of plague?

The plague caused by Yersinia pestis is not transmitted directly from rodents to humans, but is mediated by fleas. Fleas first bite rodents that carry the bacillus pestis, and then bite and transmit it to humans.

Therefore, whether the COVID-19 will turn into a plague, there are several key questions: how long can the virus survive in the body after the mouse is infected with the virus? How many viruses can be released? If a flea bites, can live viruses be transmitted to people?

For these questions, there are currently no answers.

Regardless of whether the COVID-19 can turn into a new type of plague, judging from the current situation in Brazil, the situation is very serious. In Manaus, Brazil, after a wave of epidemics last year, I thought I had overcome the epidemic and gained herd immunity. However, the epidemic resurged at the end of the year due to the emergence of new mutant strains, and it became more and more prosperous.

Nowadays, the number of newly diagnosed cases in Brazil has reached a new peak every day. It is currently the world’s first, and the total number of confirmed cases has surpassed India, becoming the second in the world.

3  Faced with the new coronavirus that can infect rodents, are humans ready?

Viruses can infect rodents. Even if there is no vector such as mosquitoes to pass the virus back to humans, it will not cause a large-scale epidemic. The virus can still exist in rodents for a long time.

For the new coronavirus, existence means mutation, and new mutation means a new attack on humans.

The experience in Manaus, Brazil, has shown that it is impossible to obtain herd immunity through infection, especially in the face of new mutations that continue to emerge.

The arrival of the vaccine has given many people hope, but there are also some people who have such a small nine-nine in their hearts: everyone else has been vaccinated, and the epidemic is under control, so I don’t have to fight.

This little nine-nine, now seeing the mouse bite to pieces! People who have been vaccinated have gained immune protection. Even if an immune barrier can be established to stop the pandemic of the epidemic in the world, it will not completely eliminate the virus. The virus can still hide in the mouse and become a time bomb, and it is unknown when A bomb that will explode.

A few months after the SARS epidemic in 2003, it suddenly disappeared, just as strange as it suddenly appeared.

In 2020, the COVID-19 virus did not disappear in the summer, and now with the blessing of rats, it is even more impossible to disappear. And because the vaccination rate is not enough nowadays, it is far from meeting the requirements of establishing an immune barrier.

Because there is no immune barrier, it is not just Brazil that the epidemic has worsened. Many countries that feel that the epidemic is well controlled, once they began to downgrade their anti-epidemic measures, the epidemic began a new round of repetition: India, France, Italy, Turkey, Poland, Germany… 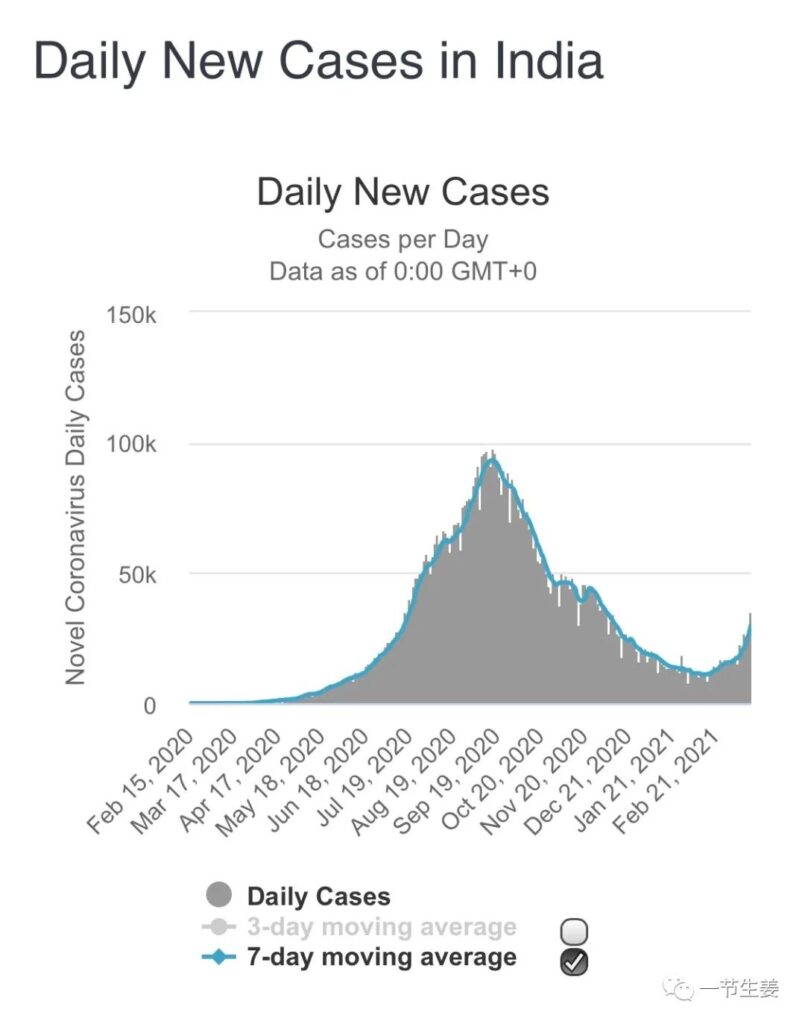 The number of new diagnoses per day in India (Source: worldometers) 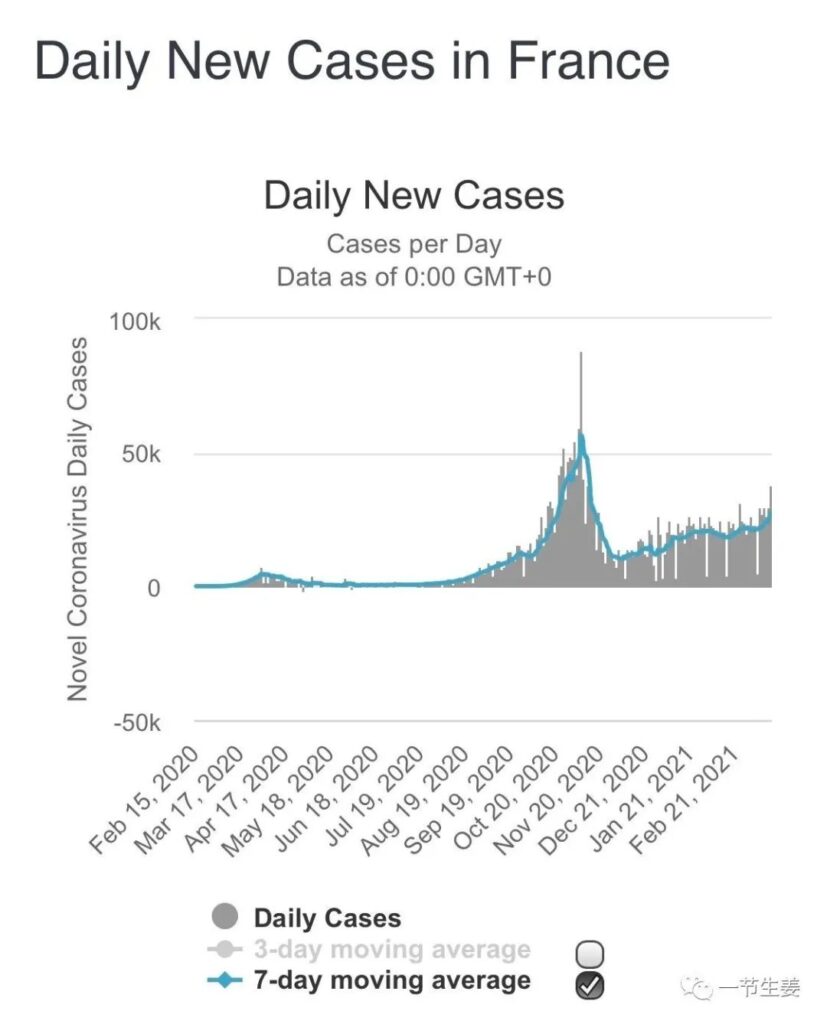 The number of new diagnoses per day in France (Source: worldometers) 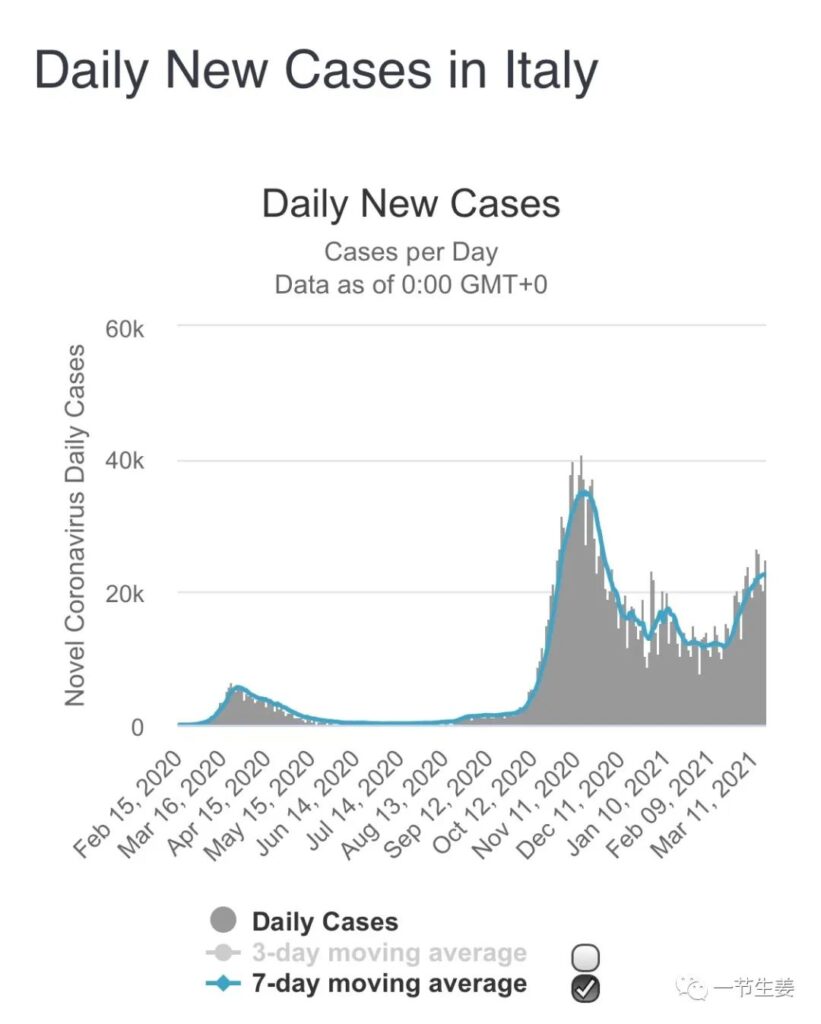 The number of new diagnoses per day in Italy (source: worldometers) 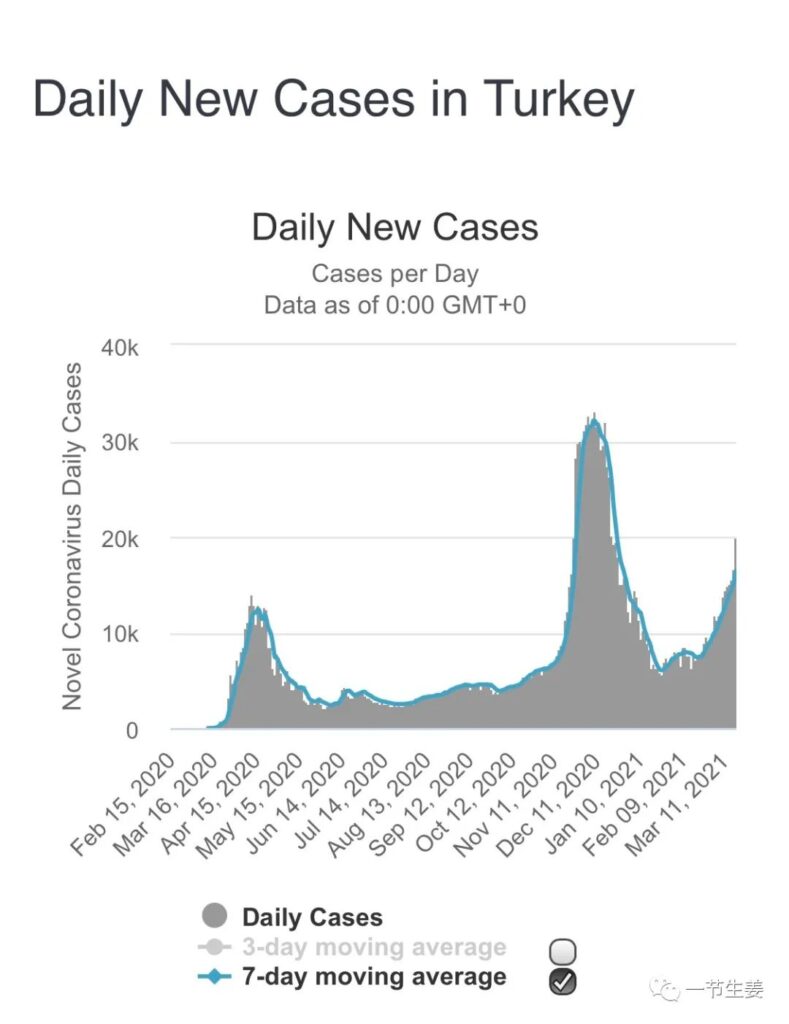 The number of new diagnoses per day in Turkey (Source: worldometers) 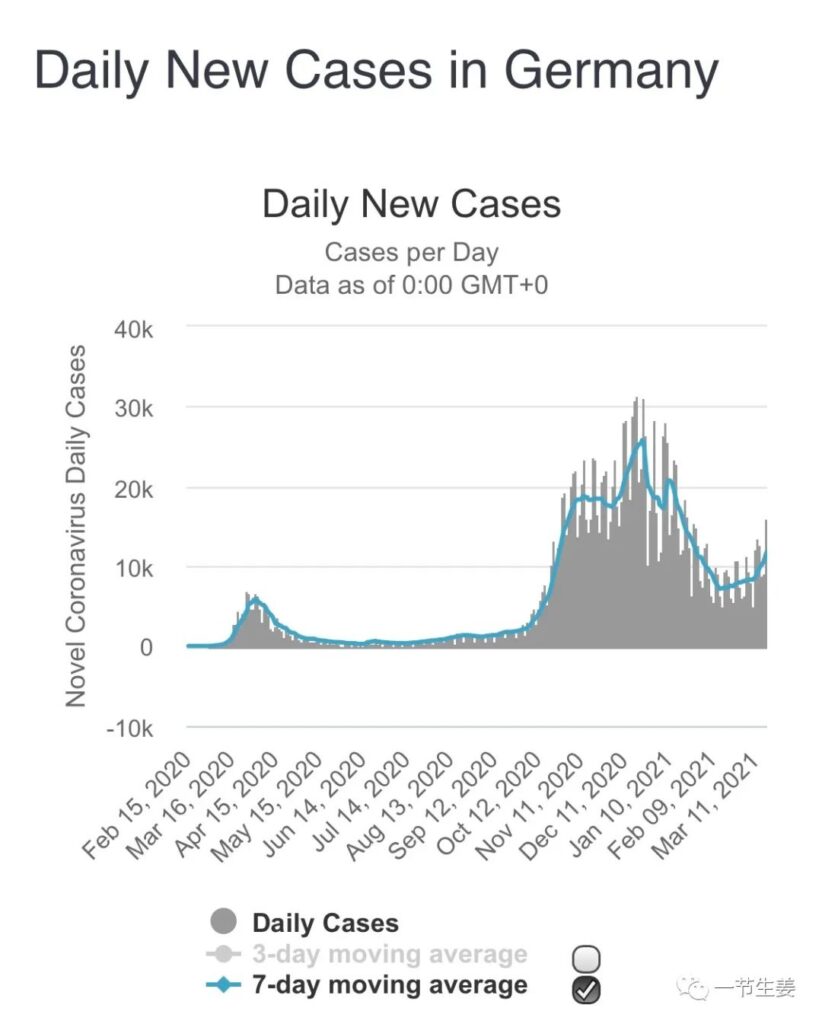 The number of new diagnoses per day in Germany (Source: worldometers) 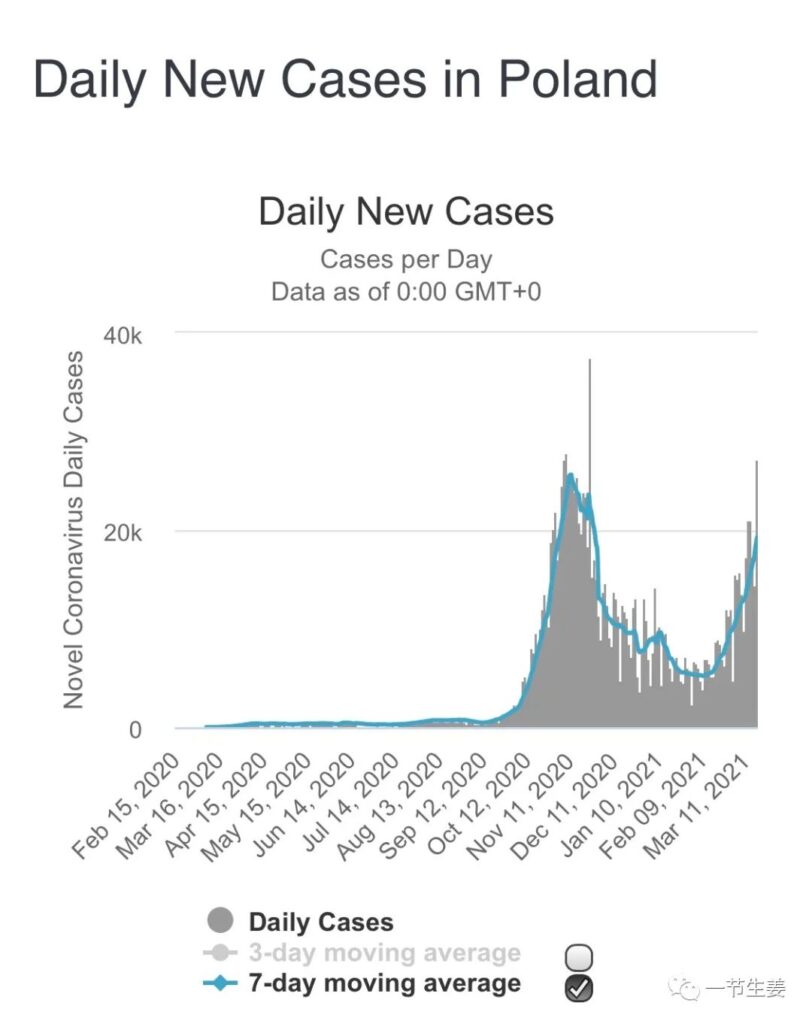 The number of new diagnoses per day in Poland (Source: worldometers)

At present, more than 400 million doses of the COVID-19 vaccine have been vaccinated globally. Now it should be time to give up doubts about the vaccine and vaccinate as soon as possible. What is ridiculous is that a post that has been widely circulated in the past two days turned out to make the world give up vaccination and give up resistance to the virus… 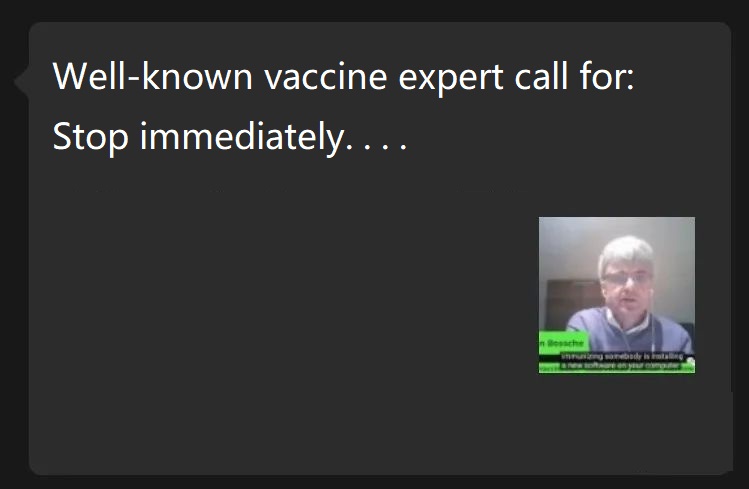 A so-called expert gave a ridiculous reason: vaccination will cause more mutations!  How does he have such logic?

The logic of this expert seems to say to a person who is eating because he is about to starve to death: Don’t eat, you will die at the end of the meal. Eating just makes you continue to die.

People who don’t want to die right away don’t understand what this “expert” is saying.

Human beings do not want to be destroyed by the epidemic immediately, only to promote the vaccination rate as soon as possible. Not only that, there are currently signs that these new mutants also reduce the protection rate of the vaccine.

Humans also need to arrange an upgraded version of vaccine that can specifically target these mutations as soon as possible.

In 2020, after Denmark discovered that minks could infect a new mutant strain of the virus, they ordered the execution of minks across the country.

Now facing the mice that can be infected with the virus, human beings are powerless and unable to execute all the mice.