The study proved that early active use of VA-ECMO for patients with large-area pulmonary embolism can benefit significantly.

The main signs of large-area pulmonary embolism are systolic blood pressure <90mmHg and support of vasoconstrictor drugs, and about 50% of patients die within 90 days.

In addition, there will be 10% deaths within the first hour of its appearance.

With the increasing maturity of cardiopulmonary bypass technology, it provides a safer and more effective new approach for the treatment of pulmonary embolism.

This article describes the experience of early and late application of venous-arterial extracorporeal membrane oxygenation in the treatment of large-area pulmonary embolism, and it was published in the Journal of Cardiothoracic and Vascular Anesthesia in January 2021.

This article conducted a single-center retrospective study of patients who were initially diagnosed with a large area of ​​PE at Emory University School of Medicine (Atlanta, GA) from September 1, 2014 to October 1, 2019, and received VA-ECMO treatment.

Research content The author constructed a general framework to describe the treatment process of a large area of ​​PE patients.

First determine the specific treatment plan for patients with large areas of PE, and choose whether to perform extracorporeal membrane oxygenation therapy before giving other interventions.

Two authors (MCCB and JA) reviewed the relevant conditions of each patient to determine the order in which these measures should be taken.

Collect the experience of VA-ECMO treatment in patients with large areas of pulmonary embolism in the early and middle and late stages, and observe the differences in hemodynamic and metabolic indicators, ECMO support time, ventilator treatment days, and length of stay in the intensive care unit between the two groups.

Statistical analysis Use Excel (Microsoft, Redmond, WA) for basic statistical summary. Due to the small sample size of this study, no statistical assumptions were made for this descriptive study.

Therefore, no adjustments were made for confounding factors such as baseline characteristics, treatment options, and other differences.

The basic characteristics of the patients are shown in Table 1. All patients received anticoagulant therapy for large-area PE.

After anticoagulation, 29% of patients were treated with ECMO first (ECMO priority group), while the remaining 71% of patients received another treatment (ECMO rescue group) before ECMO, as shown in Figure 1. 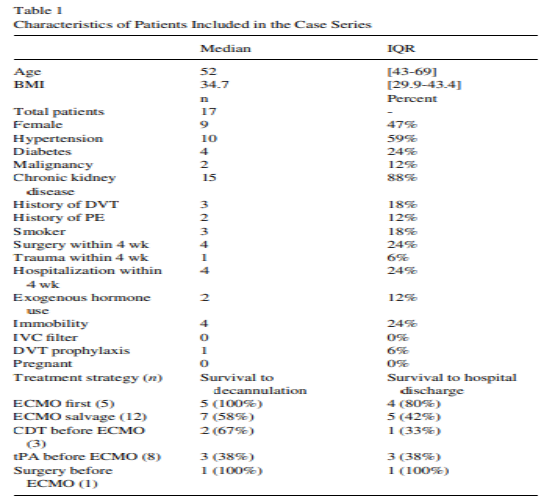 2.2 The baseline hemodynamics of the two groups of patients at the time of intubation is shown in Table 2.

The average time from heparinization to intubation in the ECMO priority group was 9 hours and 44 minutes (interquartile range was 0 hours 30 minutes to 16 hours 5 minutes).

In comparison, the average time for the ECMO rescue group was 14 hours and 19 minutes (interquartile range from 3 hours, 12 minutes to 36 hours, 35 minutes). 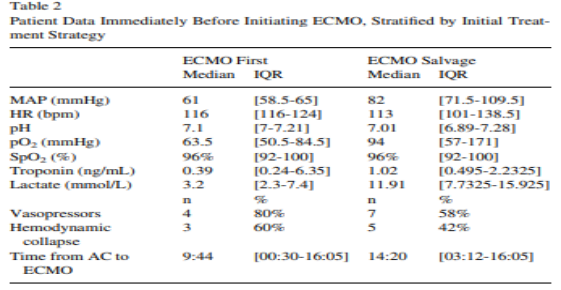 2.3 The hemodynamics of the two groups of patients were unbalanced before ECMO, and the ECMO priority group had lower mean arterial pressure, lower arterial partial pressure of oxygen, and lower lactate during intubation.

In the ECMO rescue group, a decrease in left ventricular function can be observed after extubation, as shown in Table 3.

Although the ECMO priority group had a longer hospital stay, the ECMO support time, the number of days of ventilator treatment, and the length of stay in the intensive care unit of the two groups remained consistent, as shown in Table 4.

A large area of ​​PE brings us the burden of death, and VA-ECMO provides an additional life-saving measure.

The authors acknowledge the presence of confounding factors, and studies have shown that patients with early VA-ECMO have a higher survival rate.

When performing extracorporeal membrane oxygenation therapy, it is necessary to weigh the potential complications it may bring.

Therefore, more prospective studies are needed to clarify the optimal time and sequence of VA-ECMO in the treatment of large-area pulmonary embolism.

This study reports the experience of applying VA-ECMO to the treatment of large areas of PE patients in the early and middle and late stages.

The results of the study showed that among patients undergoing VA-ECMO early, all patients successfully escaped from ECMO, and 80% of patients recovered and were discharged from the hospital.

Among all patients, those who received systemic thrombolytic therapy had the lowest survival rate until extubation.

The complication rate observed during this study is consistent with other diseases that require ECMO treatment, and the process develops very rapidly.

This study detailed the treatment sequence before and after ECMO, and reported the specific time from diagnosis of large-area PE to intubation.

However, the sample size of this study is small and the baseline characteristics of patients are quite different, so adjusted results cannot be obtained.

The study proved that early active use of VA-ECMO for patients with large-area pulmonary embolism can benefit significantly.

VA-ECMO can improve organ perfusion and stabilize circulation to facilitate the implementation of further interventions.

However, there are currently no large-sample randomized data used by ECMO in critical pulmonary embolism, only case reports or small-sample experience summary articles.

For the indications and timing of ECMO intervention, a rigorously designed RCT study is still needed to confirm.

This study is a retrospective study, and prospective studies are needed to clarify the significance of early active use of VA-ECMO in the treatment of large-area pulmonary embolism.