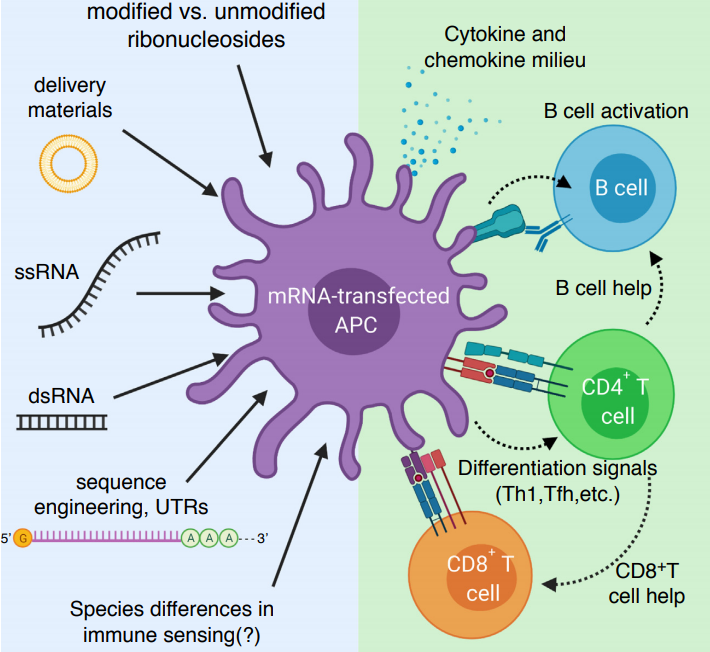 The mRNA vaccine has attracted great attention as an effective SARS-CoV2 vaccine, and is currently being developed for combined treatment methods, including chemotherapy, radiotherapy, and checkpoint inhibitors. Some of these studies have produced long-lasting tumor growth inhibition. Although these DC-based methods are effective, they are also limited by cumbersome procedures and high costs.

Engineered in vitro transcription (IVT) RNA is similar to the naturally processed and mature mRNA in the cytoplasm of eukaryotic cells. IVT of mRNA has been very mature, it can be routinely performed in a cell-free manner and produce large amounts of RNA. First, it is necessary to design a DNA template that contains the primer binding site of the RNA polymerase used (such as T7, T3 or SP6 phage RNA polymerase). This DNA template should at least contain the open reading frame (ORF) and flanking untranslated regions (5′ and 3’UTR) of the target protein. The fully processed mature mRNA also includes a 5’cap structure and a 3’Poly(A) tail.

The function of the 5’cap structure is to increase the stability and translation efficiency of the mRNA, and to remove its immunogenicity. The length of poly(A) tail is about 100-250 nucleotides. The optimal length of poly(A) tail depends on the type of target cell, which increases the stability of mRNA and translation efficiency. UTR also has important cellular functions. It is responsible for regulating mRNA translation and protein expression. The 5’UTR should also contain the Kozak sequence, which also contributes to the successful initiation of translation.

For effective cellular uptake and biodistribution of RNA, different vaccine delivery methods have been intensively studied. First, dendritic cells (DC) can internalize RNA through endocytosis, and this process can be improved by electroporation. Loading DC in vitro is conducive to the effective targeting of APCs, but it requires adoptive cell transfer, which is time-consuming and labor-intensive.

Second, naked RNA can be injected directly, with or without a vector. The carrier helps to improve the stability, RNA uptake and translatability of the vaccine. At present, several carriers have been developed, and the development of lipid nanoparticles (LNPs) is the most promising. These LNPs are non-viral vectors, are easy to produce, and are considered non-toxic. LNPs significantly prolonged and improved protein expression in the body, especially after intradermal injection.

Finally, cationic peptides and the immune activator protamine can also be used as carriers, as well as physical methods such as gene gun and microinjection methods, but the latter has limited use in humans.

Exogenous mRNA is generally considered to have an immunostimulatory effect because it can activate innate immune cells through TLRs, especially TLR3, TLR7 and TLR8. Once the pattern recognition receptors (PRRs) sense pathogen-associated molecular patterns (PAMPs), the innate inflammatory response (including IFN1) will start with the continuous activation of the adaptive immune response. TLR activation leads to the production of pro-inflammatory cytokines such as TNF-α, IFN-α, IL-6, INF-γ inducible protein 10 (IP-10) and the induction of costimulatory molecules, especially on APCs such as DC. This ultimately leads to adaptive B and T cell responses. 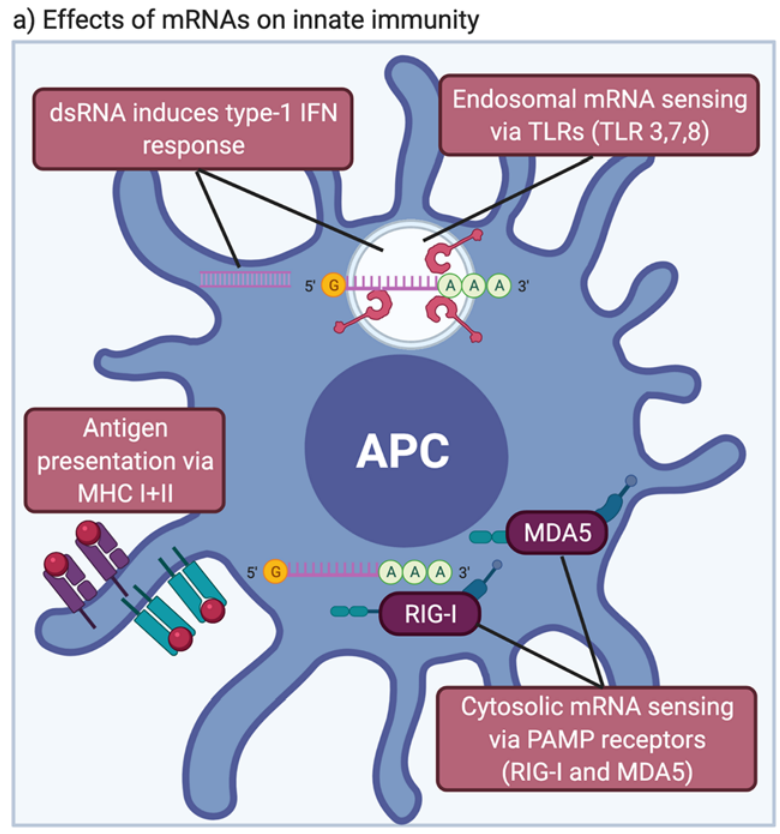 In non-immune cells, the cytoplasmic RIG-I-like receptors RIG-I and MDA5 sense foreign RNA and mediate the production of cytokines and chemokines, thereby recruiting innate immune cells (such as DC and macrophages) to mRNA Injection site.

In order to induce adaptive immunity, it is necessary to provide specific antigens to immune cells. The mRNAs of tumor vaccines usually encode tumor-associated antigens (TAAs). These tumor-derived antigens are subdivided into: i.) tissue differentiation antigens (such as CEA or MART-1, which can also be expressed on healthy tissues), ii.) tumor germline (carcinoma-testis) antigens (such as NY-ESO) -1 or MAGE-3), iii.) Normal proteins overexpressed by tumor cells (such as EGFR, Muc-1, Her2/neu), iv.) Viral proteins (such as EBV, HPV) and v.) tumor-specific mutations Antigen (such as Mum-1, β-Catenin or CDK4). 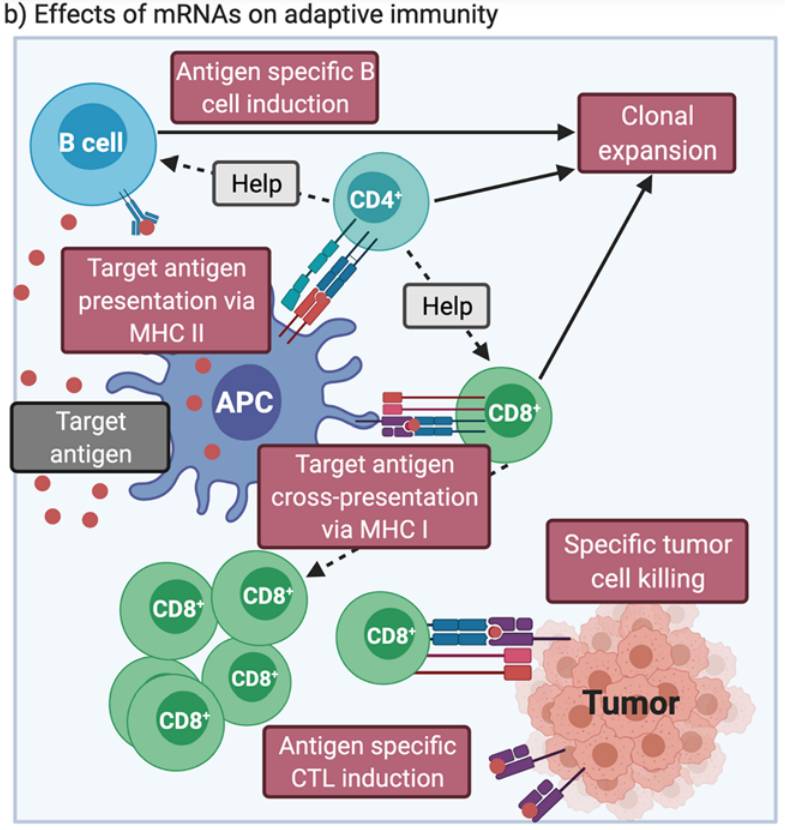 Gene abnormality is an important driving factor for tumor development. Somatic mutations may lead to the generation of new epitopes, which are tumor-derived peptides that bind to MHC and can therefore be recognized by autologous T cells. These new epitopes are considered to be the best candidate cancer vaccines.

The mRNA vaccine allows the combination of mRNAs encoding different antigens. Therefore, the DC of a person vaccinated with mRNA can present a variety of MHC-I and II restricted peptides and induce polyclonal CD4+ and CD8+ T cell responses. Vaccines containing two or more mRNAs encoding different proteins or long peptides can achieve a wide range of polyclonal immune responses. Avoid the restriction of certain HLA molecules and the risk of immune escape due to loss of antigen.

In addition, the method of vaccination determines the duration of antigen expression (intramuscular and intradermal time is longer, and the time after systemic application is shorter), continuous antigen availability can produce high antibody titers and GC-B cells and Tfh reaction.

New vaccine delivery and complex methods, as well as the continuous understanding of innate and adaptive immunosensing mechanisms, have paved the way for clinical trials of tumor mRNA vaccines. 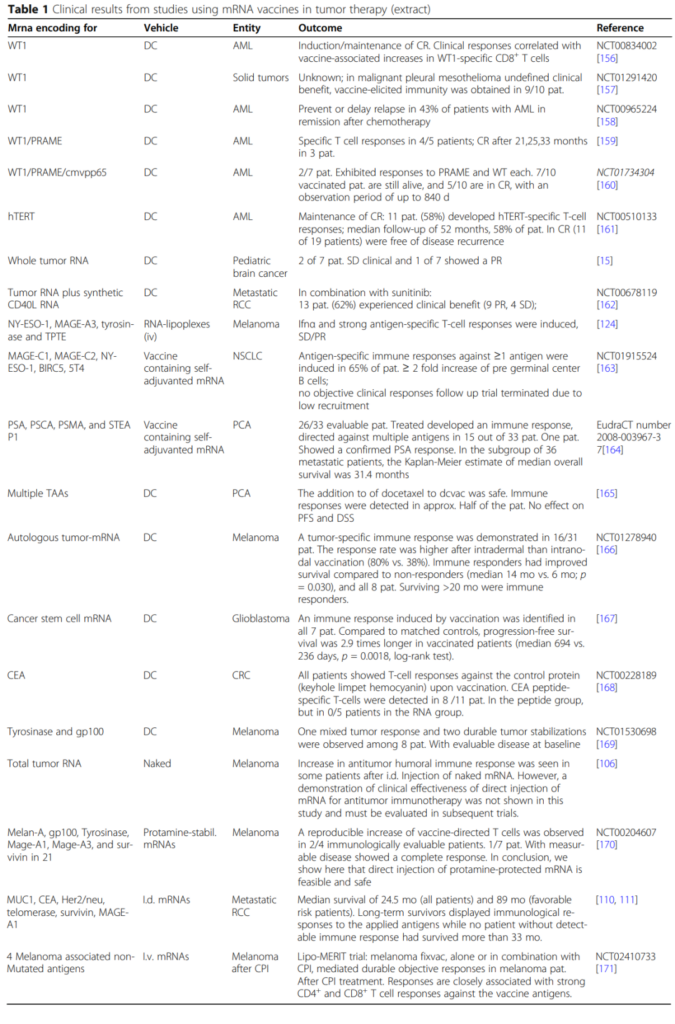 Several clinical trials of DC-based mRNA vaccines have been applied in cancer patients. Combining vaccination with mRNA encoding melanoma-associated antigens and TriMix resulted in impressive tumor regression of advanced melanoma. At present, mRNA vaccines are being developed for combined treatments, including chemotherapy, radiotherapy, and checkpoint inhibitors. Some of these studies have produced long-lasting tumor growth inhibition. Although these DC-based methods are effective, they are also limited by cumbersome procedures and high costs.

In another study, 7 locally advanced patients and 39 metastatic NSCLC patients received 5 intradermal injections of CV9201, which is a code for 5 NSCLC antigens (NY-ESO-1, MAGE-C1/2, survivin , 5T4) live vaccine. 63% of patients developed an antigen-specific immune response against at least one antigen, and 60% of patients showed an increase in activated IgD+CD38high B cells. 31% of patients had stable disease (SD), and the other two-thirds had progressed disease. A similar study aimed at improving anti-tumor immunity tested the use of CV9202 combined with local radiotherapy in patients with advanced NSCLC.

The mRNA-4157 vaccine is an mRNA vaccine developed by Moderna in the United States. It is a personalized tumor vaccine tailored for each tumor patient. The current mRNA-4157 cancer vaccine can contain up to 34 mRNA sequences encoding neoantigens. . In the phase I clinical trial of mRNA-4157 combined with Keytruda, 11 of the 13 patients receiving monotherapy maintained stable disease. In the combination therapy group, 6 out of 20 patients received a response, including 1 complete remission and 5 partial remissions. 6 patients had stable disease, and 8 had worsening conditions. All adverse events related to mRNA-4157 are reversible and minor. No treatment-related adverse events of grade ≥3 were observed, proving the safety and tolerability of the vaccine. Currently, a number of tumor mRNA vaccines are in the clinical recruitment stage. 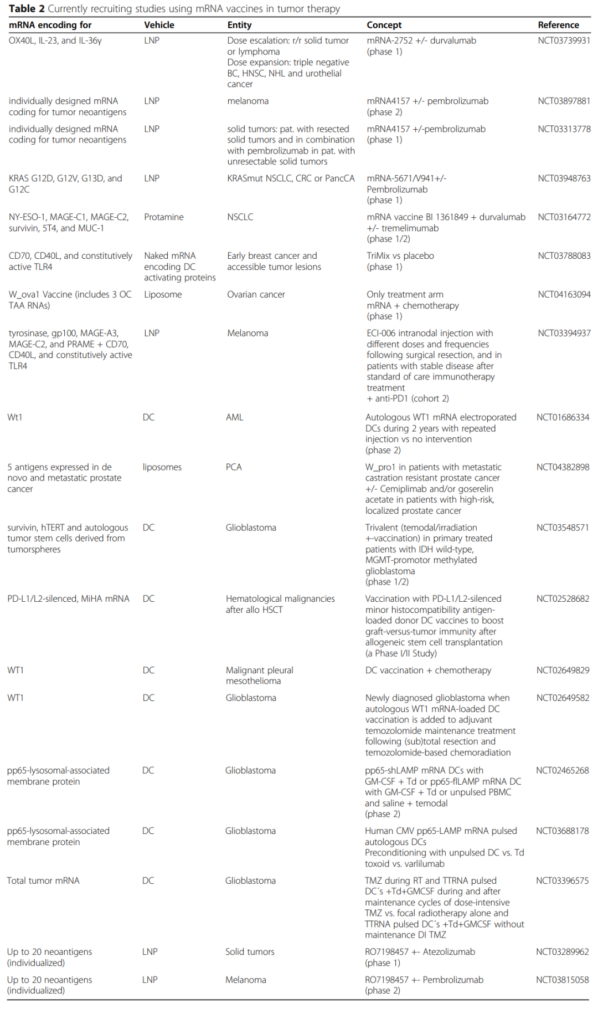 Until 2020, no mRNA vaccine has been approved in the world. Since the approval of different mRNA vaccines for SARS-CoV2 in the current pandemic in 2020, safety issues have become more and more prominent.

mRNA vaccines contain no cellular or animal components, are generally proven to be safe and well tolerated, and show few serious problems. However, clinical experience with acute and long-term side effects is very limited. In some cases, local reactions may occur, such as pain at the injection site, redness, or systemic allergic reactions.

In addition to these local and systemic inflammatory reactions, there are also theoretical risks of uncontrollable inflammation and autoimmunity. This is mainly mediated by the induced IFN1 response. At present, there is no clear evidence that immune induction against mRNA itself occurs. However, in patients with systemic lupus erythematosus and other autoimmune diseases, it has been suggested that the development of anti-auto RNA antibodies may trigger and progress autoimmunity.

In addition, the residual risk of toxic side effects associated with delivery compounds, complexing agents, and possible inserted nucleotides still exists. For the latter, it must be considered that these side effects may only appear for a long time after treatment.

Most cancer vaccine trials have limited success rates in patients with advanced disease or treatment of refractory tumors. Most often, effective T cell induction activation is the main obstacle. There are many techniques to improve the delivery, composition, immunogenicity, or translatability of mRNA. However, several specific factors of the immune response to tumors need to be considered. These include the best time for vaccine application, the choice of target antigen, the control of the tumor microenvironment, and other potential joint applications that may produce synergistic anti-tumor effects.

In addition, mRNA vaccines can not only encode specific antigens, but also can be used for the transient expression of antigen-specific TCRs or CARs. If these mRNAs are transfected into immune cells such as T cells or natural killer cells, the transfected cells can recognize and eliminate tumor cells that express the target antigen. For example, in one study, mRNA was applied to transient T cells expressing epidermal growth factor receptor (EGFR)-specific CARs to eradicate EGFR-expressing tumor cells.