The conventional surgical approach for knee replacement is divided into the medial parapatella approach, the inferior medial femoral approach, the transmedial femoral approach, and the lateral parapatella approach according to the incision of the joint capsule. When the operation is difficult, especially in the case of knee ankylosis, in order to reveal enough to ensure the smooth progress of the operation, quadriceps femoris cut, quadriceps shaping, tibial tubercle osteotomy, etc. can be used to expand the exposure methods. The above methods have been explained in Chapter 5. This section provides further supplements for the most commonly used parapatellar approach in TKA surgery.

The advantages of this approach are low difficulty, convenient incision extension, adequate exposure, and less vascular and nerve trauma. If extended to the full length, this operation can provide good exposure for the knee joint. As long as the length of the incision is appropriately extended, most knee joint operations can be completed through this incision. 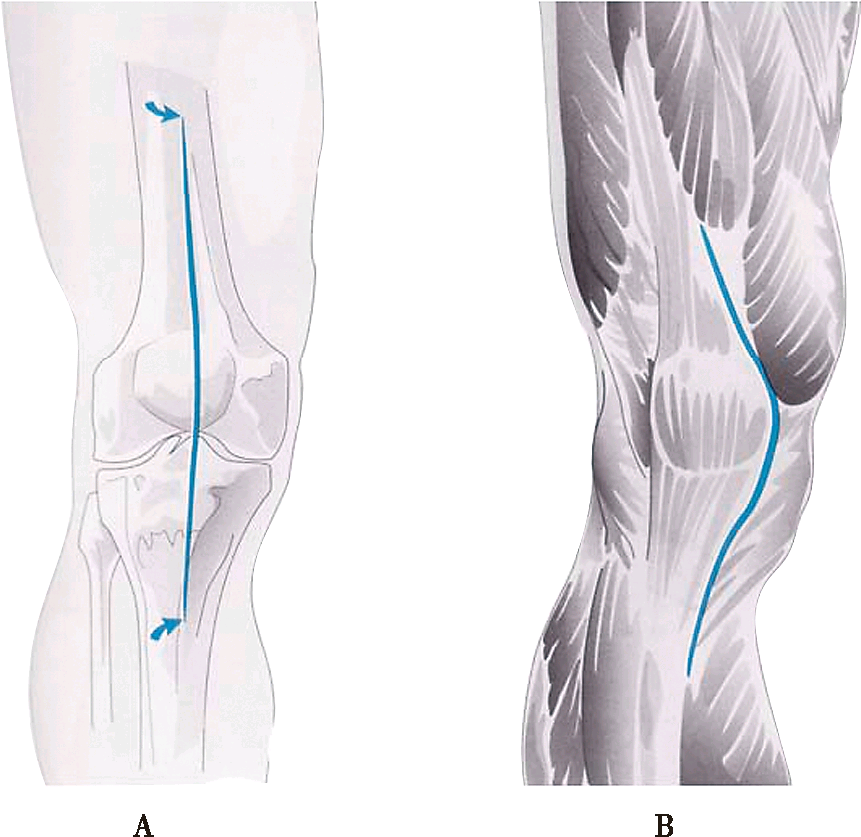 After the joint capsule is cut, the osteotomy cannot be performed immediately. The upper and lower articular surfaces must be fully exposed before the osteotomy, and the flexion and extension of the soft tissues must meet the requirements to ensure the correct osteotomy and placement of the prosthesis.

2. Dissociate under the periosteum near the tibial tubercle of the patellar tendon to reduce the risk of patellar ligament avulsion;

3. Loosen the lateral patellofemoral ligament, which is conducive to patellar valgus;

4. Appropriate removal of the subpatellar fat pad can not only improve the mobility of the patella, but also reduce the formation of subpatellar scars after surgery;

6. If the above method is still insufficient, you can extend the incision proximally to enlarge the exposure.

When the patient has a rigid knee or a stiff knee, the risk of the patellar ligament being avulsed from the tibial tubercle during the exposure process is high. All of the above methods to increase the patellar mobility, such as medial semimembranosus bursectomy, subpatellar fat pad removal, and Lateral release of the patella and external rotation of the tibia are effective methods to prevent avulsion of the patellar ligament. In addition, supplementary methods such as exposing the lateral tibial plateau, removing scars, and stripping the joint capsule to Gerdy’s nodules are included to increase the movement space of the patella. These supplementary measures must avoid damaging the cochineal tendon and the lateral collateral ligament. In addition to external rotation of the tibia, it also helps to reverse the patella. When none of the above methods meet the exposure requirements, the following methods can be used to meet the exposure requirements.

On the basis of the traditional medial parapatella approach, simply place the proximal end of the incision obliquely toward the outer and upper rectus femoris muscle to cut off the rectus femoris tendon. The operation method is simple and easy to implement, while effectively improving the exposure of the stiff knee joint, it will not significantly increase the incidence of complications.

It will not damage the lateral superior knee artery, and will not affect postoperative rehabilitation and quadriceps function. Assess the difficulty of turning the patella and flexing the knee joint during the operation.

If the patella is difficult to flip through the conventional approach, which may cause avulsion of the tibial tubercle, extend the proximal end of the incision at 45° outward and upward, and cut off the rectus femoris near the rectus femoris tendon-abdominal joint to help the patella Flip down and out (Figure 6-3-2). If there is still difficulty, observe whether there is a thickened scar tissue that needs to be removed, or the external support of the patella is loose. For those who have difficulty, it is necessary to consider quadriceps V-Y shaping. 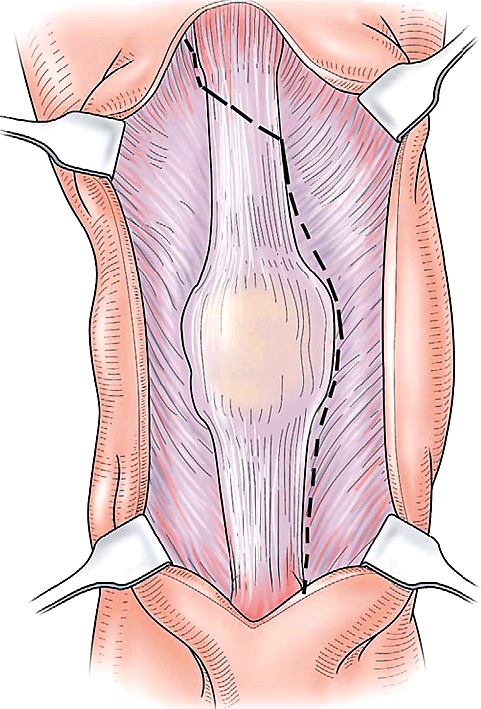 Tibial tuberosity osteotomy also has the effect of extending the knee extension device, and does not damage the quadriceps, and the muscles will not leave scars, and have little effect on the function of the quadriceps. Moreover, the strength of bone-to-bone healing is more reliable. On the basis of the conventional medial parapatella approach, it extends down to 8-10cm away from the tibial tubercle. The osteotomy block includes the tibial tubercle with the patellar ligament intact and the tibial anterior cortex with the tibial crest at the distal end. The bone piece is about 6cm long and 2cm wide (not less than 1cm). Use a bone knife or electric saw to cut off the tibial tubercle and its distal bone block from the tibia, but maintain the complete connection of the soft tissue and periosteum on the outer edge of the bone block and preserve the blood supply. Fully expose the knee joint. The key to the success of the operation is that the cut bone block with tibial tuberosity must be large enough, the stem end of the tibial prosthesis must exceed the distal end of the osteotomy, and the periosteum of the outer edge of the osteotomy block must be intactly connected and firmly fixed. Because screws can cause local stress concentration in the bone graft, fractures are prone to occur. Therefore, for the re-fixation of the osteotomy block, the wire binding method is usually used (Figure 6-3-3). 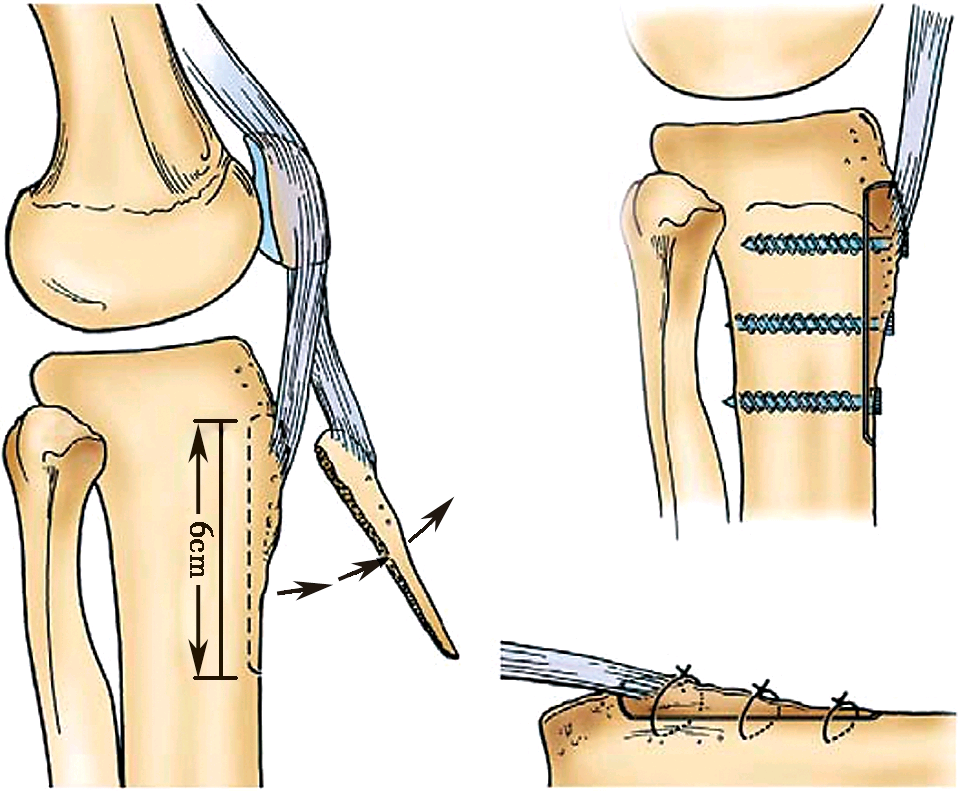 However, this extensive subperiosteal dissection technique may cause instability in and out of the joint. At this time, a highly restrictive prosthesis needs to be selected; in addition, extensive subperiosteal dissection may also cause avascular necrosis of the femoral condyle. Therefore, this technique can only be used when there are no other options.