Science: Demystifying the effectiveness of HIV vaccine candidates.  These findings help to fine-tune experimental HIV vaccines based on human CMV.

About two decades after the first design of a new vaccine based on the rhesus monkey cytomegalovirus strain 68-1 (RhCMV), researchers from the Oregon Health and Science University in the United States are unraveling why it can be about half The monkey version of HIV that prevents and ultimately eliminates HIV in non-human primates (called SIV), and why it is a promising vaccine candidate to prevent HIV infection in humans. 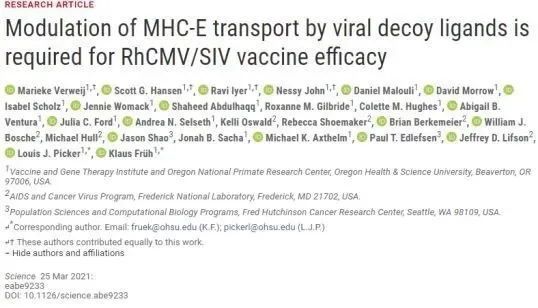 On March 25, 2021, the researchers who built the RhCMV vaccine platform described the unusual biological mechanism by which it works. Related research results were published in the form of one Science paper (hereinafter referred to as the first paper) and two Science Immunology papers (hereinafter referred to as the second paper and the third paper). 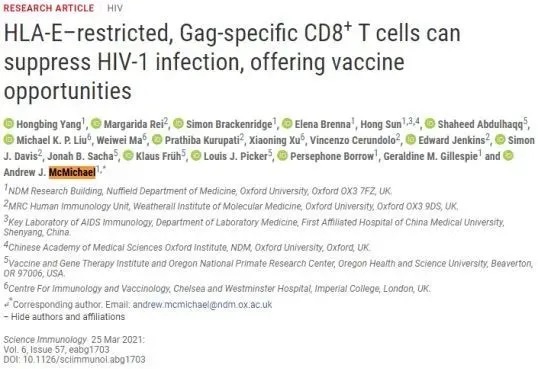 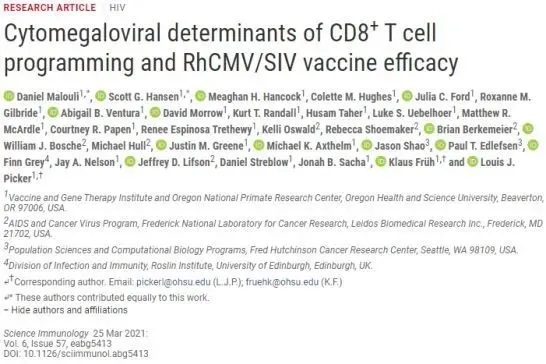 These findings also help to fine-tune the human CMV (HCMV)-based HIV experimental vaccine (called VIR-1111) developed at Oregon Health and Science University, which is currently being evaluated in a phase 1 clinical trial. The clinical trial was carried out by Vir Biotechnology, which obtained a cytomegalovirus (CMV) vaccine platform technology license from Oregon Health and Science University.

Dr. Louis Picker, deputy director of the Institute of Vaccines and Gene Therapy at Oregon Health and Science University, said, “Understanding the mechanism by which this RhCMV-based SIV vaccine works in rhesus monkeys allows us to quickly determine the potential of human vaccines. If you If the wrong gene is added to the RhCMV vaccine, the critical immune response necessary for curative effect will not be formed. If you want a high degree of protection, you must be injected with the RhCMV vaccine accurately, and you must know what you are looking for.”

These reactions are comparable in scale and degree of differentiation to those caused by RhCMV vectors, but they cannot prevent SIV infection. Therefore, the direct activation of MHC-E restricted CD8+ T cells guided by Rh67 is critical to the efficacy of this RhCMV/SIV vaccine. 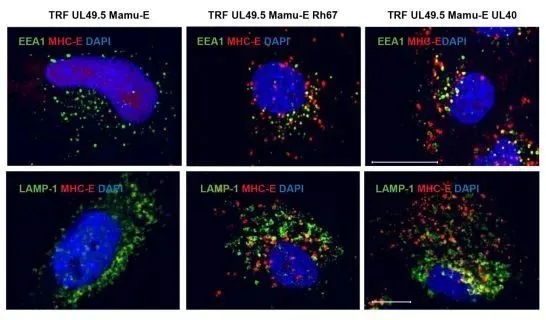 MHC-E (red) is localized to the intracellular space of fibroblasts (blue) by endocytosis. Picture from Science Immunology, 2021, doi:10.1126/sciimmunol.abg5413.

Dr. Klaus Frueh, Professor of Molecular Microbiology and Immunology at the Institute of Vaccines and Gene Therapy at Oregon Health and Science University, “For some time, we have known that rhesus monkeys vaccinated with the RhCMV vaccine against SIV have unusual T Cell responses. But we don’t know whether they are important to prevent SIV infection. This study clearly shows that without this particular MHC-E restricted T cell response, we would not be protected.”

In the third paper, these researchers found that only when eight specific genes of natural RhCMV are missing or inactivated, the vaccine can produce these special T cells to fight SIV. And the first paper described how the RhCMV protein Rh67 is required to activate MHC-E restricted CD8+ T cells against SIV. These two papers together suggest how to design a CMV-based vaccine to generate these unconventional T cell responses.

In the second paper, a research team led by Dr. Andrew J. McMichael of the University of Oxford in the United Kingdom studied whether the knowledge gained from experiments on non-human primates can be transferred to humans. They found that MHC-E restricted CD8+ T cells can proliferate and inhibit HIV in the laboratory cell culture medium.

These three papers were published in April 2001 when the Institute of Vaccines and Gene Therapy at Oregon Health and Science University celebrated the 20th anniversary of the opening of its first research building. Picker and Frueh moved to Oregon to help establish the institute: Picker has been leading its vaccine project since its establishment, and Frueh collaborated with Picker on research in 2006.