The COVID-19 pandemic has pushed mRNA vaccines to the center stage of the biotechnology and pharmaceutical industries.

The speed of vaccine development also exceeded expectations. A vaccine was available 10 months after the SARS-CoV-2 sequence was published.

This success not only proves that the biotechnology and pharmaceutical industries are capable of responding to urgent and unmet global needs, but also proves the inherent ability of mRNA as a form of medicine.

Compared with conventional vaccines, mRNA vaccines have low cost and production It has the advantages of high efficiency, high safety, and the potential to synthesize any kind of protein.

Therefore, it has great application potential for new infectious viruses that traditional vaccines cannot deal with.

However, due to the instability of mRNA molecules, high innate immunogenicity and low delivery efficiency in vivo, the application of mRNA vaccines has been limited.

To realize the wide application of mRNA vaccines, it is necessary to focus on delivery technology.

The mRNA vaccine needs a suitable delivery vehicle to deliver it to the body in order to have a better immune effect. The development of an efficient and non-toxic delivery system is the key to the success of the mRNA vaccine.

Professor Michael D. Buschmann, Dean of the Department of Bioengineering at George Mason University, described the development of the mRNA delivery system in the review, summarized the results of preclinical and clinical studies of the SARS-CoV-2 mRNA vaccine, and focused on the current SARS-CoV-2 vaccine Lipid nanoparticles used in clinical trials, and the role of lipid nanoparticles in mRNA vaccines was analyzed.

Before COVID-19, mRNA vaccines have been used in preclinical and clinical research, including influenza, Zika virus, HIV, Ebola virus, rabies, malaria, genital herpes, toxoplasmosis, etc. In the current vaccine competition against the new coronavirus COVID19, initial results have been achieved based on mRNA vaccines.

It is worth noting that two of the trials announced the results of the interim phase 3 trial, reporting the mRNA sequence encoding the spike protein immunogen (delivered in the form of lipid nanoparticles) after two doses of 30 µg or 100 µg and SARS-CoV- 2 The effect of reducing the infection rate by more than 94%.

The delivery technology platform is one of the keys to mRNA vaccines. A large number of mRNA preparation systems have been reported, many of which have entered clinical trials. These preparation technologies all realize the delivery of mRNA vaccines through the formation of special mRNA carriers.

Protamine carrier technology: Protamine is a natural cationic protein that can complex negatively charged mRNA molecules into nano-scale nucleic acid particles, thereby protecting mRNA from degradation by RNase in the serum; but due to protamine The binding with mRNA is too tight, so the protein expression efficiency of mRNA vaccines using this preparation will be limited, and the expression of antigens is also largely affected by the ratio of protamine and mRNA.

In recent years, protamine mRNA delivery systems have been widely used in clinics and have achieved good clinical treatment effects. For example, CureVac adopted this method to produce rabies vaccine candidates, CV7201, a freeze-dried, temperature-stable laboratory The modified mRNA is composed of free and protamine complex mRNA encoding the glycoprotein of rabies virus.

Although many polymers have been developed, they are not as advanced as lipid nanoparticles in nucleic acid delivery, and the number of animal studies that successfully apply them to vaccines is limited.

The encapsulated mRNA in the complex is not easily RNase. Degraded, can be successfully delivered to cells and translated into functional proteins. 2-Dioleoyl hydroxypropyl-3-N, N, N-Trimethylammonium chloride (DOTAP) and Dioleoylphosphatidylethanolamine (DOPE) have been proven effective delivery vehicles.

Cationic polymer has the function of concentrating mRNA. After the mRNA and polymer are concentrated, they are wrapped in a sac-like cavity by cationic liposomes to form lipopolyplex (LPR). LPR was first used for DNA transfection, and later it was also used for siRNA and mRNA transfection.

LNP is currently one of the mainstream delivery vehicles. Because it is relatively easy to be absorbed by antigen-presenting cells, it is most commonly used in vaccines. 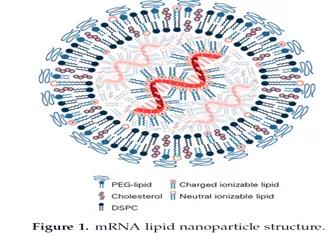 For mRNA vaccines, most studies and all current clinical trials use intramuscular injection, while intradermal injection has also been studied, usually in parallel with the intramuscular route.

Although it has not been highly developed so far, intranasal vaccines have advantages such as activation, which can reduce the dependence on needle-based immunity.

The determinants of the performance of mRNA delivery systems are multi-factors and interactions, including:

(1) their ability to deliver to appropriate cells and effectively release mRNA to the cytoplasm of the translation mechanism;

(2) their adjuvant properties, which can be Enhance immune response;

(3) Minimize any contribution to adverse events or toxicity that may be caused by excessive inflammation at the injection site or systemic distribution and targeted expression.

Acuitas ALC-0315 (Table 2) combined with DSPC, cholesterol and polyethylene glycol-lipid is the delivery system in BioNTech’s SARS-COV-2 test. CureVac and Imperial College London can also use ALC-0315, or possibly A9 (Table 2).

BioNTech began to develop its SARS-CoV-2 vaccine, in which 4 mRNAs encode immunogens, two of which are nucleoside modified, one is unmodified, and one is self-amplified.

The report can be used for two types of nucleoside modified mRNAs: BNT162b1 is a short ~1kb sequence that encodes the receptor binding domain of spike protein, modified by foldon trimerization domain to increase immunogenicity through multivalent display.

The longer 4.3kb BNT162b2 encodes a full-length membrane-bound protein stabilized by dialanine. BNT162b2 has recently received emergency approvals from the European Union and the United States. 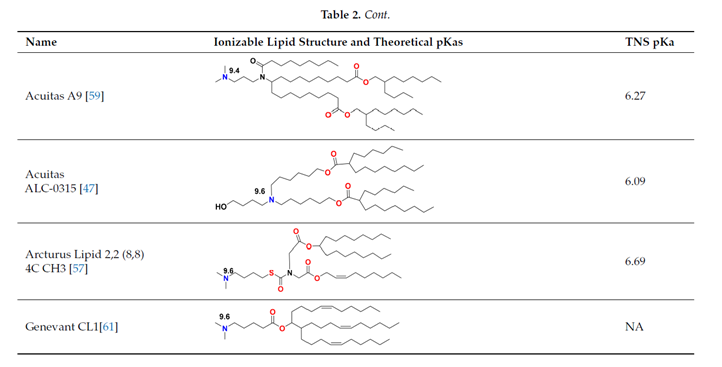 Moderna’s mRNA-1273 is a vaccine based on mRNA that encodes the full-length new coronavirus spike protein. It is designed to induce neutralizing antibodies that point to part of the “spike” protein of the coronavirus SARS-ConV-2, which uses the spike protein to bind and enter human cells. In Moderna’s research, the immunogen encoded by the nucleoside modified mRNA is a transmembrane anchored dialanine stable fusion pre-peak, with a natural furin cleavage site, and transmitted in the LNP, which follows Prototype MC3 LNP, but use lipid H (SM-102) instead of MC3.

CureVac’s mRNA vaccine CVnCoV is a sequence-optimized mRNA-based SARS-CoV-2 vaccine encapsulated by lipid nanoparticles (LNP), which encodes a full-length, pre-fused and stable S protein. Unlike other mRNA-based methods, CVnCoV consists entirely of non-chemically modified nucleotides and can be applied at relatively low doses.

Translate Bio uses unmodified mRNA to encode a double mutant form of double proline stabilized spike protein to deliver ionizable lipid C12-200 in the form of LNP, but it may be from ICE or cysteine-based ionizable lipid Quality family. The vaccine was studied in non-human primates. Most primates produced neutralizing antibodies after one dose of the vaccine. The antibody titer of all organisms was significantly higher than that of humans after the second dose of vaccine. The level of rehabilitation serum.

Arcturus Therapeutics’ LUNAR-COV19 is an extremely low-dose, potential single-shot (im) single-shot self-replicating mRNA vaccine without any viral substances or adjuvants. Pre-clinical in vitro data show that the administration of LUNAR-COV19 can effectively express the COVID-19 virus spike protein, which is the antigen that forms protective antibodies. Arcturus has completed the Phase 1 clinical trial with a dose of 1-10 µg, and 7.5 µg was selected for Phase 3 test.

The self-amplified RNA vaccine delivered in Acuitas LNP developed by Imperial College London can effectively inject new genetic code into human muscles, guiding the muscles to produce a protein that appears on the surface of the new coronavirus, thereby making it protective Immune response. Phase 1 clinical trials of the vaccine are about to begin

Chulalongkorn University cooperated with the University of Pennsylvania to use Genevant to develop a natural spike immunogen nucleoside modified mRNA LNP, which may be a CL1 lipid. Their goal is to start the first phase of clinical trials in the first quarter of 2021, and to start the distribution of vaccines to seven low-income countries in Thailand and nearby in the fourth quarter of 2021.

Providence therapeutics has been authorized by Health Canada to conduct human clinical trials of the PTX-COVID-19B mRNA LNP vaccine. The first phase of clinical trials is planned to start in the first quarter of 2021, and the production and sales of the vaccine will be approved by the regulatory authorities in the same year.

Most RNA LNPs manufactured in the laboratory are stable for several days at 4°C, but then show an increase in size and a gradual loss of biological activity, such as luciferase expression.

In order to stabilize the storage and distribution of the mRNA-LNP vaccine, a frozen form is required. Moderna COVID-19 vaccine needs to be stored between 25°C and 15°C, but it can also be stable between 2°C and 8°C for 30 days, and between 8°C and 25°C for 12 hours.

The reason behind these temperature differences is not obvious, because both vaccines contain similar high concentrations of sucrose as a cryoprotectant.

Moderna mRNA LNP is frozen in two buffers, Tris and acetate, while Pfizer/Biotech vaccine uses only phosphate buffer. It is well known that phosphate buffers are not suitable for freezing because they tend to precipitate and cause a sudden change in pH when ice crystallization begins.

Lyophilization has always been a challenge for mRNA LNPs. However, Arcturus has stated that their COVID-19 mRNA vaccine is stable in lyophilized form, which may greatly simplify distribution, although the temperature stability of this lyophilized formulation has not been disclosed.

In the past two decades, the progress in mRNA therapeutics has been extraordinary. The first step is to modify nucleosides and sequence engineering to determine methods to control mRNA innate immunogenicity, as well as the application of mRNA in vaccines and other therapeutic indications. .

The adoption of the lipid nanoparticle prototype has made the delivery efficiency of lipid nanoparticles an order of magnitude higher than that of the previous system, and is continuously improving, mainly due to the design of new ionizable lipids.

The structure, function, potency, targeting and biological properties of mRNA-LNP, such as adjuvant properties, still need to be explored in order to give full play to the potential of this powerful and transformative treatment.