The structure and function of adenovirus core protein

The structure and function of adenovirus core protein.  Adenovirus was first isolated from human proliferating glands in 1953 and can infect humans and livestock. Certain types of human adenovirus can induce tumors in newborn hamsters, which is important in medicine and veterinary medicine. 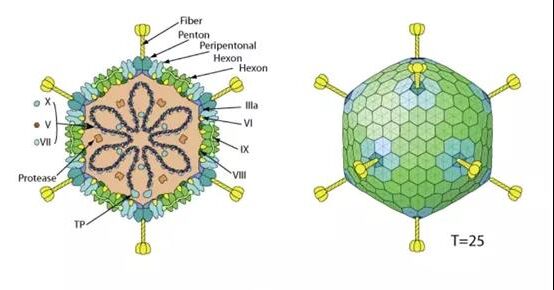 Adenovirus has 11 structural proteins (PI~PX, plus TP). Among them, PV, PVII, TP (terminal protein) and PX (enzyme protein) four polypeptides/proteins and DNA together form the core of the virus. The main core protein is PVII, which wraps viral DNA.

Next, we will briefly introduce the structure and function of several of these proteins:

pVII is a highly basic protein, rich in arginine (23%) and alanine (19%) residues. Approximately 46% of pVII amino acids are positively charged or highly cationic, which makes them attractive to the negatively charged phosphate backbone of DNA.

Functionally, pVII interacts with DNA and cellular proteins to regulate the life cycle of the virus. pVII is a functional analog of cellular histone (H) and has been widely accepted. H4 is one of the subunits of histones, which is acetylated and phosphorylated. Although the H4 subunit and pVII do not have much structural similarities, both proteins contain a non-random distribution of basic residues and appear to be acetylated and phosphorylated, and the mass ratio of protein to DNA is 1 :1. Interestingly, pVII mimics cellular protamine in function, which is an arginine-rich nucleoprotein that replaces histones during spermatogenesis to condense sperm head DNA. Unlike protamine, protein VII interacts with nucleosomes but cannot replace histones in nucleosomes. Recent reports indicate that pVII may be indirectly involved in the early stages of virus-cell interaction.

The highly basic N-terminus of pV interacts with genomic DNA. The pV linked to each unit of the DNA-pVII hexamer may contribute to the condensation of the viral genome. In addition, the interaction between pV and pIVa2 (a role in DNA encapsidation) suggests that pV may also play a role in viral DNA encapsidation.

Functionally, first of all, pIVa2 acts as a transactivator and activates the main late promoter (MLP) through the downstream binding element (DE). The downstream binding element (DE) contains two main binding sites, called DE1 and DE2a, respectively. And DE2b. The protein pIVa2 is a component of DEF-A and DEF-B, acts as a positive transcription factor, and interacts with the DE element of MLP. Second, pIVa2 plays a role in adenovirus DNA packaging. As a homodimer or a complex with virus p22K, pIVa2 alone interacts with the CG nucleotides of the A repeat consensus sequence (5-TTTG-(N8)-CG-3) of the adenovirus DNA packaging domain located at its left end. Acts on adenovirus DNA.

Adenoviral protease (AVP) is an endopeptidase encoded by AdVs in the late stage of infection. It is a highly alkaline protein and represents a new type of cysteine ​​protease. It specifically recognizes sequence motifs, (M/I/L)XGX-G and (M/I/L)XGG-X (where X can be any amino acid). Interestingly, AVP seems to be phosphorylated.

Approximately 7-50 copies of AVP are packaged in mature virions. The new AVP is synthesized in an inactive form, and is partially active after being packaged in immature virions and combined with viral DNA. The AVP bound to the viral DNA comes into contact with the sliding pVI and is cleaved at the N- and C-termini, releasing the 11 amino acid peptide (240-250 amino acids) cofactor pVIc. The binding of pVIc to AVP bound to viral DNA activates the protease.

Finally, the adenovirus precursor protein is located by sliding the AVP-pVIc complex along with the viral DNA in the virion. A recent study showed that the 11 amino acid pVIc can act as a molecular sled, sliding AVP together with DNA. The development and evaluation of anti-adenoviral drugs is precisely due to the unique biology of AVP and the availability of the crystal structure of active and inactive forms of AVP.

The Mu protein (pMu) encoded by the late adenovirus transcript is a highly basic protein due to the large number of arginine residues. pMu contains non-overlapping nuclear and nucleolar localization signals. In addition, pMu contains two functional consensus AVP cleavage site sequences, which are recognized by AVP to generate three fragments: (a) hydrophobic N-terminal amino acids 1–31, (b) basic central amino acids 32 to 50, and (C) C-terminal amino acids 51-79. There are about 100-300 short middle parts of 19 amino acids (the 32nd to 50th amino acids) in the mature virion. 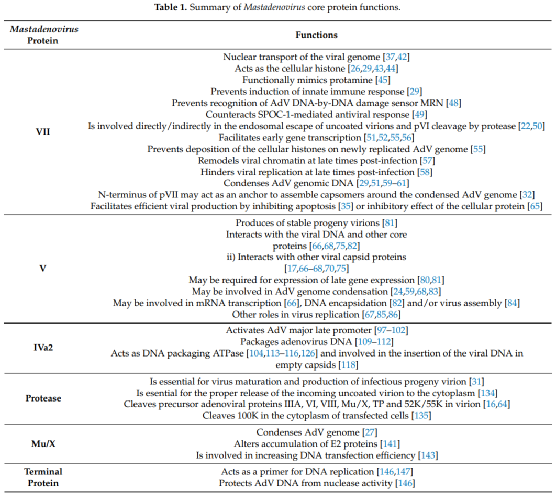 The picture above shows the core protein function of mammary adenovirus

In summary, the structure and function of adenovirus core protein in different stages of virus infection have been elucidated in the past ten years, including evading the virus’s innate immune response and the initial stage of virus-cell interaction (Table 1). This may be because there are more advanced technologies to explore the structure of AdV and develop more effective adenovirus vectors. Future research aimed at determining the biological functions of core protein interactions will help to provide more in-depth knowledge about the biological core proteins of adenoviruses.