However, recurrence after CAR-T cell therapy is still an obstacle, and as many as 50% of patients receiving CAR19 T cell therapy relapse within the first year after treatment, and a considerable number of these relapsed patients show loss of CD19 antigen.

Similarly, the recurrence of CAR22 T cells after the treatment of acute lymphoblastic leukemia (ALL) is related to the down-regulation of the CD22 protein of malignant tumor cells, so that CAR22 T cells can no longer recognize and kill them.

In the process of using CAR19 T cell therapy and then using CAR22 T cell therapy, the sequential loss of CD19 and CD22 tumor surface antigens has also been reported in diffuse large B-cell lymphoma.

In order to solve the problem of tumor antigen escape, researchers from Lentigen in the United States have previously developed a tandem bispecific CAR20-19 construct targeting CD19 and CD20 antigens, and it has shown promise in phase 1 clinical trials. Efficacy and tolerability.

Using multispecific CAR-T cells to target tumor cells is speculated to reduce the escape of tumor antigens and improve the therapeutic effect.

Related research results were recently published in the journal Science Translational Medicine, with the title of the paper “Trispecific CD19-CD20-CD22–targeting duoCAR-T cells eliminate antigen-heterogeneous B cell tumors in preclinical models”.

These authors constructed 4 duoCAR constructs (called D1, D2, D3, and D4). The two open reading frames of each construct were separated by a P2A peptide. Their expression profiles on the surface of T cells are shown in the figure. 1 shown.

D2 is the same as D1, except that the OX40 domain is used instead of the ICOS costimulatory domain. D3 contains the same tandem CAR gene targeting CD19 and CD20 as the construct D2.

The tandem CAR gene is followed by a CD22 targeting CAR gene, the second-generation ICOS costimulatory domain and the CD3 activation domain. 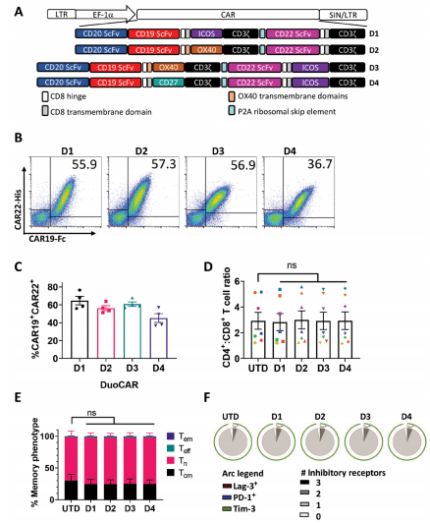 Based on four independent transduction experiments, the average expression of duoCAR D1 was 64%, D2 was 56%, D3 was 60%, and D4 was 45%. These authors can continue to produce duoCAR-T cells, and these duoCAR-T cells do not have any undesirable evidence of spontaneous activation, failure, or terminal differentiation. 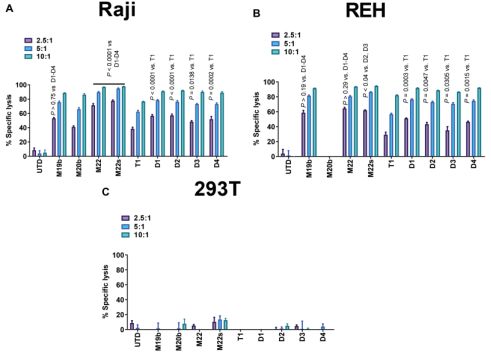 They used the tumor cell lines Raji (CD19+CD20+CD22+) and REH (CD19+CD20-CD22+) for in vitro tests and found that compared to monoCAR-T cells, duoCAR T cells lysed Raji cells and REH cells more effectively, but There is no duoCAR T cell lysis target antigen-negative cell line 293T (CD19-CD20-CD22-), which indicates that this tumor-killing effect is not antigen-independent (Figure 2). 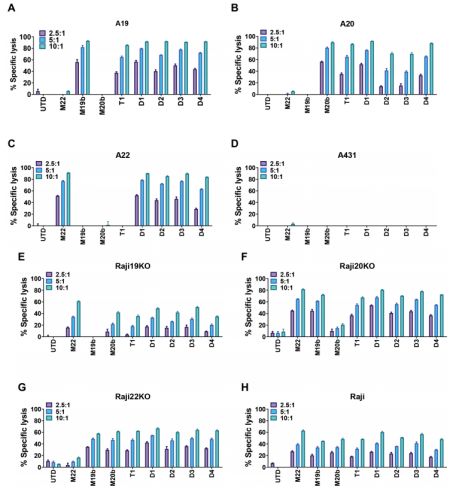 They found that duoCAR T cells produce cytokines IL-2, IFN-γ, TNF-α, GM-CSF and IL-9, in addition to IL-4 to a certain extent. As expected, T cells that were not transduced with CAR-carrying lentiviral vectors (hereinafter referred to as UTD T cells) did not produce cytokines, thus confirming that the production of such cytokines is dependent on CAR (Figure 3). 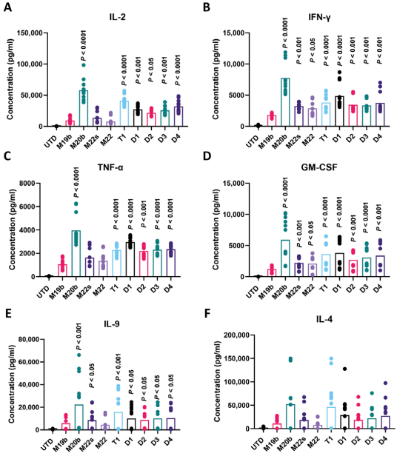 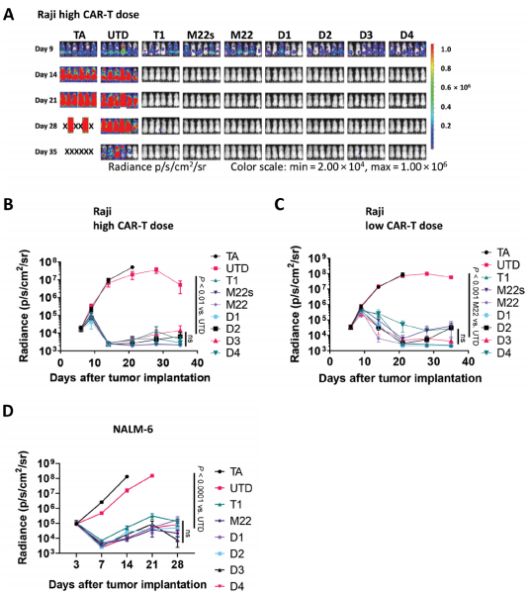 In addition, in order to test the anti-tumor function of duoCAR-T cells against tumor cell mutants with missing antigens, NSG mice were implanted with 5×106 Raji cells (composed of Raji19KO cells, Raji20KO cells, Raji22KO cells and parental Raji cells, each Seed cells accounted for 25%).

This mixture of Raji cells represents an antigenic heterogeneous tumor. In this tumor, some tumor cells lose the expression of the target antigen to a certain extent.

Seven days after injection of this Raji cell mixture, these mice received 5 x 106 duoCAR D1/D2/D3/D4 T cells and monoCAR-T cells as a control. On the 14th day, they found that these four duoCAR T cells strongly rejected Raji tumors with antigenic heterogeneity, and at the end of the study, these mice were still in remission. In contrast, monoCAR-T cells could not control the tumor burden in mice in the control group (Figure 6). 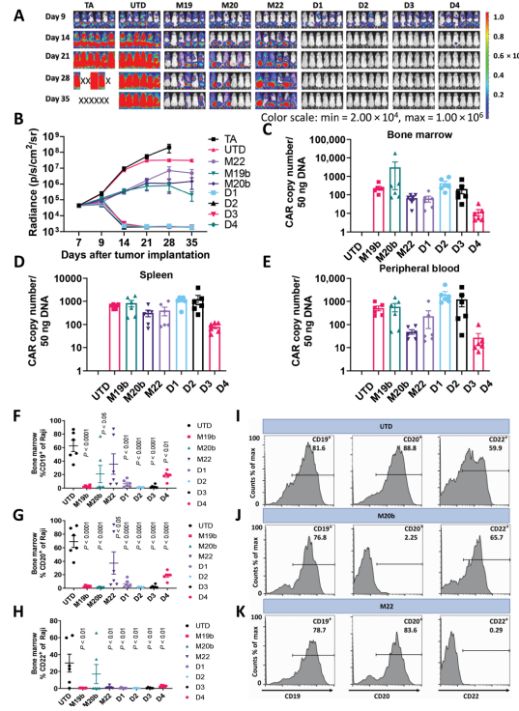 In addition, they also found that when combined with surface antigens on target cells, compared with the monoCAR design, duoCAR constructs can phosphorylate CD3 robustly and activate downstream signaling proteins Akt and MAPK p38, as well as the remote signaling mediator STAT5.

In addition, this duoCAR design retains the key activation characteristics of the homologous monoCAR, and the activation amplitude is minimal or not decreased.

This study confirmed the high functionality of duoCAR-T cells in vitro and in vivo. This approach broadly addresses the pressing problem of antigen heterogeneity. In addition, these authors discovered an unexpected combination of the best costimulatory domains that did not include CD28 or 4-1BB domains, indicating that scientists have a strong interest in T cell signal transduction associated with high activity and long-term persistence.

In addition, from the phosphorylation of p38 and Erk1/2, the reduction of some activation signals in duoCAR indicates that the maximum initial activation may not be related to disease control.

The duoCAR-T cell method developed in this research is improved on the basis of current CAR-T cell therapy, overcoming the clinical challenges of tumor heterogeneity and tumor antigen escape, while maintaining high anti-tumor efficacy and durability.