For a long time, cancer has been regarded as the “number one killer” of human beings. According to the latest data, there were 19.29 million new cancer cases worldwide and 9.96 million deaths from cancer last year. This staggering number means that although the global socio-economic development has increased substantially in the past decade and the level of medical care has been unprecedentedly improved, it still cannot stop the rapid increase in cancer incidence and related deaths. Therefore, most people still talk about cancer. The fight against cancer has a long way to go.

However, when did cancer start? In other words, when did health stop? More and more people believe that cancer is a continuous process without clear boundaries.

Known age is the most clear cancer risk factor. With age, the risk of cancer will gradually increase. According to research, the average age of all cancer patients at the time of diagnosis is 66 years old. So how many years did the tumor secretly grow before that? When did cancer first appear?

Recently, in a study published in “Cell Stem Cell”, a research team led by Harvard Medical School in the United States calculated the cancer gene by reconstructing the cancer cell lineage history of a 63-year-old and a 34-year-old patient with rare blood cancer. The first appearance time was around 19 and 9 years old respectively. In other words, for the 63-year-old patient, the initial cancer-causing mutation appeared as early as 44 years ago.

The researchers said that this cancer is like a childhood disease, but it took decades to show up, which is really surprising.

This study provides further evidence that cancer will progress silently and slowly for a long period of time before becoming an obvious disease. The research results also provide new methods for early detection, prevention or intervention of cancer.

In order to find out the origin of the individual’s cancer, the researchers collected bone marrow stem cells from two patients with myeloproliferative tumors driven by JAK2 mutations, and isolated some stem cells containing the mutations and normal stem cells from each patient, and then proceeded to single cells. Whole genome sequencing.

Over time and by chance, non-hereditary somatic mutations appear in the cell’s genome, and this spontaneous mutation is usually harmless. Two cells that divide from the same mother cell will have very similar somatic mutation “fingerprints.” When a cell divides for multiple generations, two distantly related cells with a common ancestor have accumulated different mutations over time, so their common mutations will become rare.

The researchers analyzed the “fingerprints” of these mutations, and then established a lineage development tree for the patient’s stem cells, and mapped the relationship between the cells and their common ancestors to trace back to the cell of origin, that is, the first common mutation Progenitor cells. This process is similar to the study of the relationship between chimpanzees and humans. 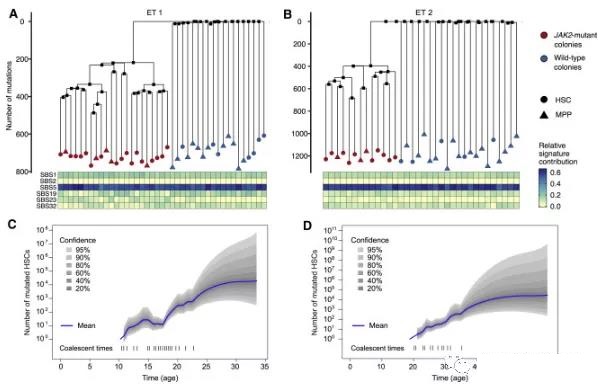 By observing the relationship between cells, researchers can also estimate the number of cells carrying mutations over time, thereby reconstructing the “history of cancer development”: “Initially, only one cell had a mutation. In the next 10 years, only There are about 100 cancer cells, but as time goes by, this number starts to increase exponentially, becoming more and more, until it reaches thousands.” 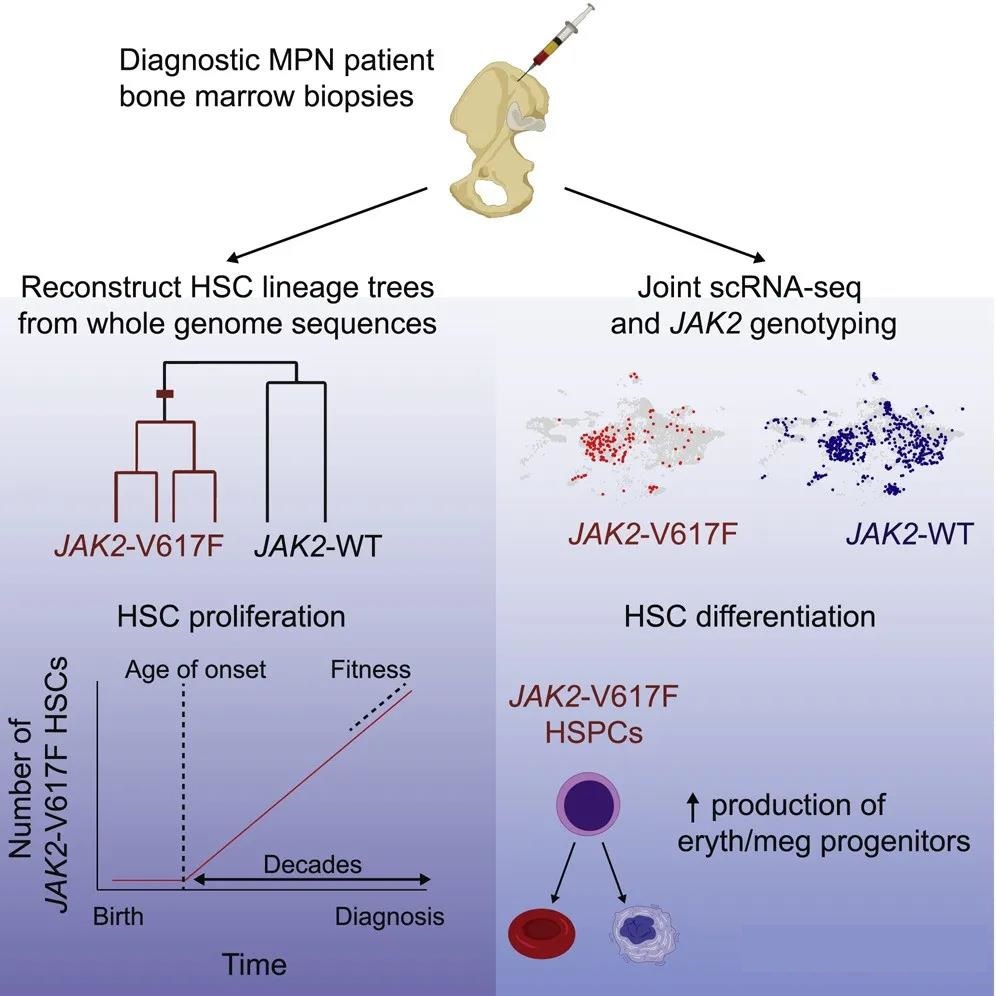 We have always believed that it takes a long time for cancer to show obvious disease symptoms, and this research has made this clearer.

The researchers also found that JAK2 mutations give cancer cells a certain adaptive advantage, which helps cancer cells compete with normal bone marrow stem cells for a long time. This degree of selective advantage may be a possible explanation for the faster progression of cancer in some individuals, such as the cancer patient who was diagnosed at the age of 34.

The researchers said that the results of this series of studies provide new insights for the development of new diagnostic methods, such as technologies that can identify rare cancer-causing mutations that are difficult to find.

The co-corresponding author of the study, Harvard University Department of Systems Biology and Harvard Medical School Assistant Professor Sahand Hormoz said: “For me, the most important thing is when we can detect these cancers. If the patient develops 40 years after the mutation Before entering the hospital, can we detect the mutation earlier? Can we prevent cancer from occurring before the patient realizes that they are sick? This will be our ultimate dream.”

Although their method can be generalized to other types of cancer, Hormoz pointed out that myeloproliferative tumors are driven by a single mutation in a very slow-growing stem cell. Other cancers may be caused by multiple mutations or faster-growing cell types, so further research is needed to better understand the evolutionary differences between cancers.