In terms of efficacy, the confirmed objective response rate (ORR) is 14%, and the disease control rate (DCR) is 37%.

SCLC is a refractory and poor prognosis subtype of lung cancer, accounting for about 15% of lung cancers. It is characterized by rapid growth and early spread. The vast majority of patients are already in stage IV or extensive stage (ES) at the time of diagnosis. .

The first-line standard chemotherapy regimen for ES-SCLC has limited efficacy, and the first-line immunization combination has shown good efficacy on SCLC.

However, with the successive withdrawal of O drugs and K drugs in SCLC indications, immunotherapy can be described as mixed. In terms of targeting, there are no approved drugs yet.

This multicenter, phase I study included 52 SCLC patients, all of whom had relapsed/refractory SCLC patients who received at least 1 line of platinum chemotherapy. 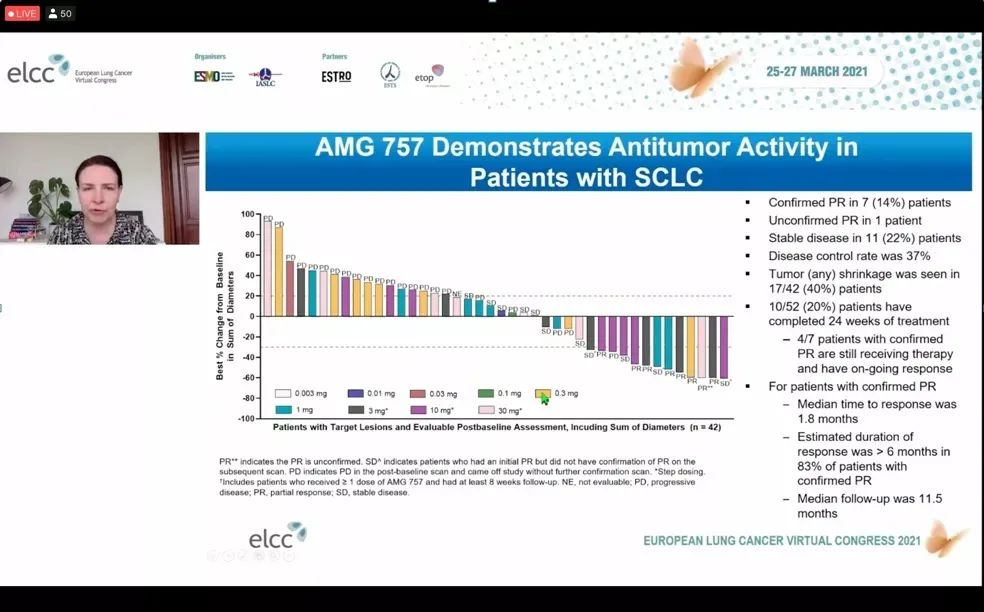 In terms of efficacy, the confirmed objective response rate (ORR) is 14%, and the disease control rate (DCR) is 37%. Among the 7 patients with confirmed partial remission (PR), the median time to disease remission was 1.8 months. Among patients with a median follow-up of 11.5 months, 83% of patients had a duration of remission (DoR) greater than 6 month. 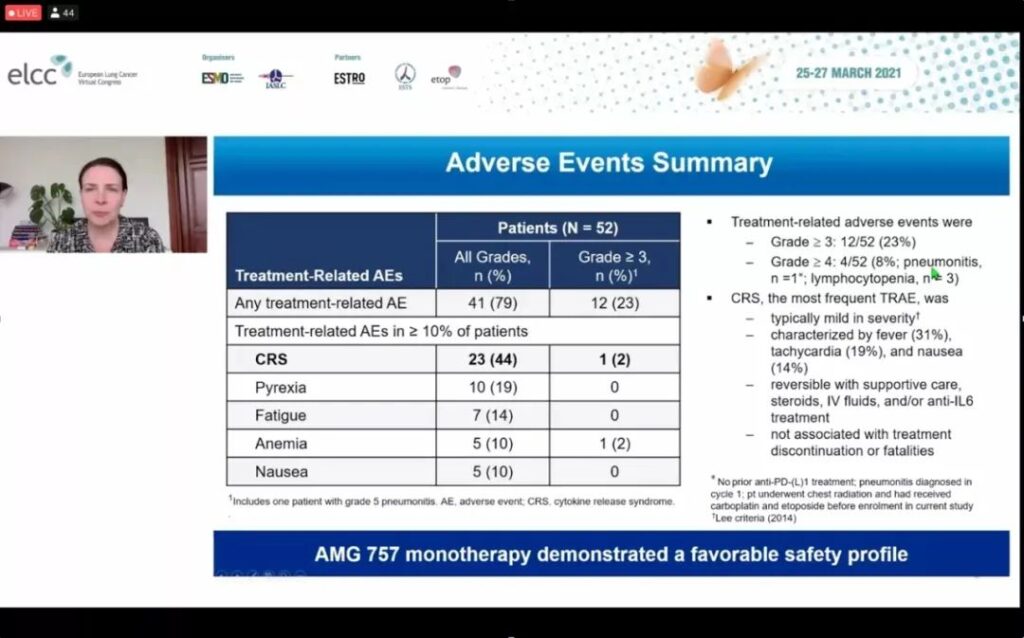 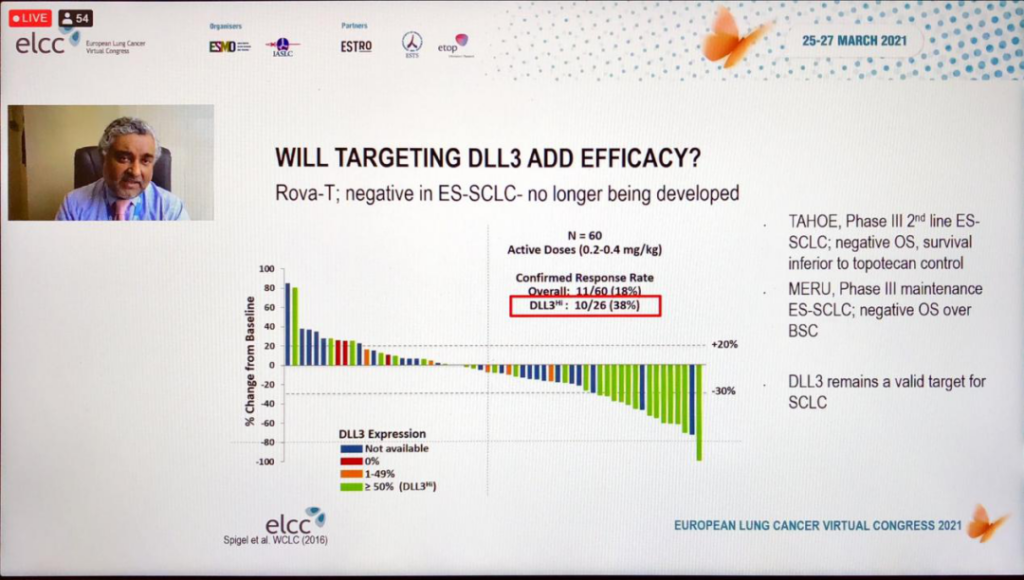 The researcher of the study said: Although the study has set up 9 dose cohorts, the maximum tolerated dose of AMG 757 has not yet been reached, and the study is still going on to determine the phase II recommended dose.

The incidence of grade 4 AEs was 8%, including pneumonia (n=1) and lymphopenia (n=3); 1 patient died of pneumonia. CRS has nothing to do with discontinuation or death of the patient. 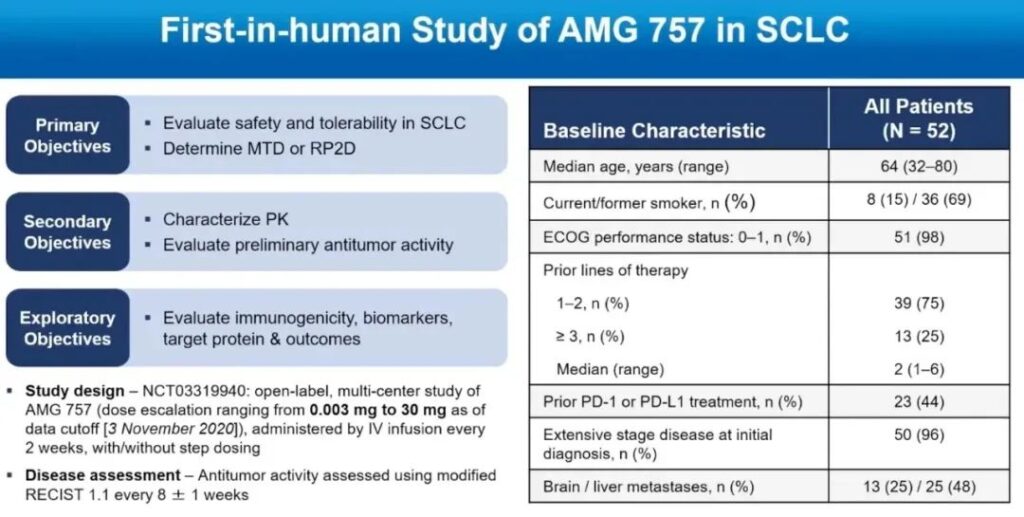 The origin cells of SCLC are pulmonary neuroendocrine cells (PNEC). These PNECs have potential stem cells and damage repair under normal physiological conditions. The maintenance of this damage repair ability depends on a variety of signal pathways, including the Hedgehog (Hh) pathway And Notch pathway.

Among them, the high expression of DLL3 in SCLC and neuroendocrine cells is an ideal target for SCLC. Amgen’s DLL3 target layout, in addition to AMG757, the CAR-T therapy AMG119 targeting DLL3 is also in Phase I clinical.

AMG757 is a bispecific antibody targeting DLL3 and CD3. DLL3 is the ligand of Notch, and CD3 antigen is an important marker on the surface of T cells.

T lymphocyte activation is the basis of immune response and one of the hot targets. CD3 is one of the bispecific antibody targets in tumor targeted therapy. 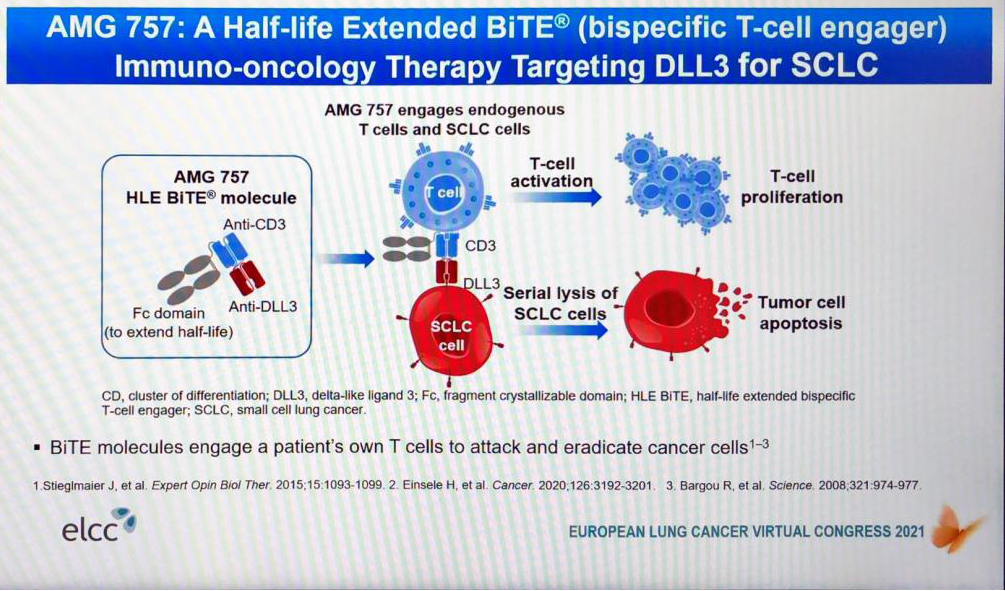 BiTE has a small molecular weight and is easy to penetrate tumor tissues. It is low-dose, but it has a short half-life without Fc fragments. AMG757 uses Amgen’s new generation of bi-antibody platform HLE BiTE. Compared with the previous generation of BiTE platform, HLE BiTE molecule contains Fc with increased half-life.

In short, AMG 757 has shown a very good initial clinical effect. As the dose escalation study is further carried out, the optimal dose will be determined, and the Phase II clinical data is expected. As the most difficult to treat small cell lung cancer, it is also expected to usher in the first targeted drug.