The role of TIGIT+ memory B cells in immune regulation

The role of TIGIT+ memory B cells in immune regulation.  A new mechanism of regulatory B cell immunosuppression.

The role of regulatory B cells (Breg) in immune regulation has been widely described in different disease models, including inflammation, infectious diseases, transplantation, and cancer. However, due to the lack of Breg-specific lineage markers, the previously reported Breg subgroups are not well separated from other subgroups not only in surface phenotype, but also in functional characteristics.

Therefore, it is difficult to know which subgroups of human Breg are more important in immunomodulation. This is a key issue that needs to be resolved in the development of Breg biology and the potential clinical development of Breg-based therapeutic strategies.

The study analyzed the data of human peripheral blood and tonsil B cell FACS array, and divided the CD19+ human B cell population into 6 different populations. The study found that CD24hiCD27+CD39hiIgD−IgM+CD1c+ memory B cells exhibit powerful and unique functional characteristics in suppressing immune response. They not only express IL-10, Granzyme B and TGF-β1, but also express surface receptors PD-L1, CD39/CD73 and TIM-1. More importantly, they also express a co-inhibitory receptor TIGIT with Ig and ITIM domains, which can regulate the function of dendritic cells (DC) and inhibit Th1, Th2, Th17 and CXCR5+ICOS+T cell responses. At the same time, it promotes the response of T cells expressing IL-10. In vivo data on blood samples from liver transplant and kidney transplant recipients further support the importance of TIGIT+ human memory B cells in immune regulation.

Subgroup typing of B cells

According to the expression level of surface molecules, the study divided the peripheral blood B cells of healthy people into 6 different groups, including IgD, CD24, CD27, CD38 and CD39. 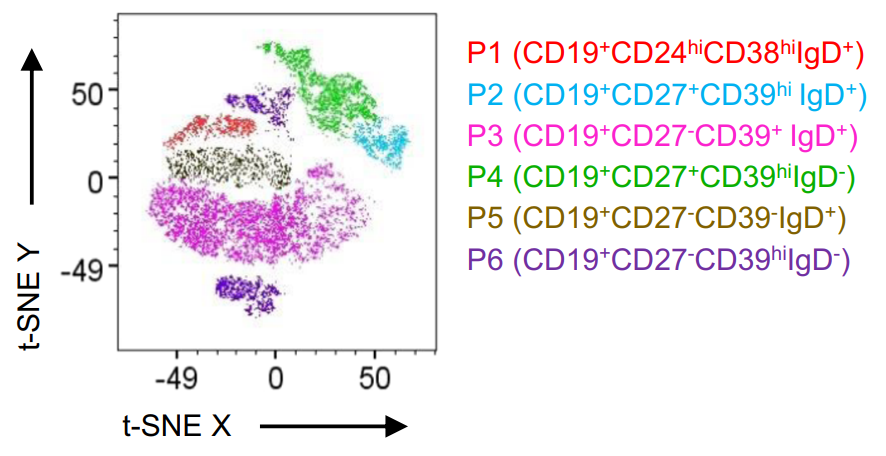 All B cells express the tested integrins, but the expression levels of P2 and P4 B cells are relatively high. The increased expression of integrin and CXCR3 in P2 and p4B cells indicates that P2 and P4 cells can migrate to target tissues better than other B cells. 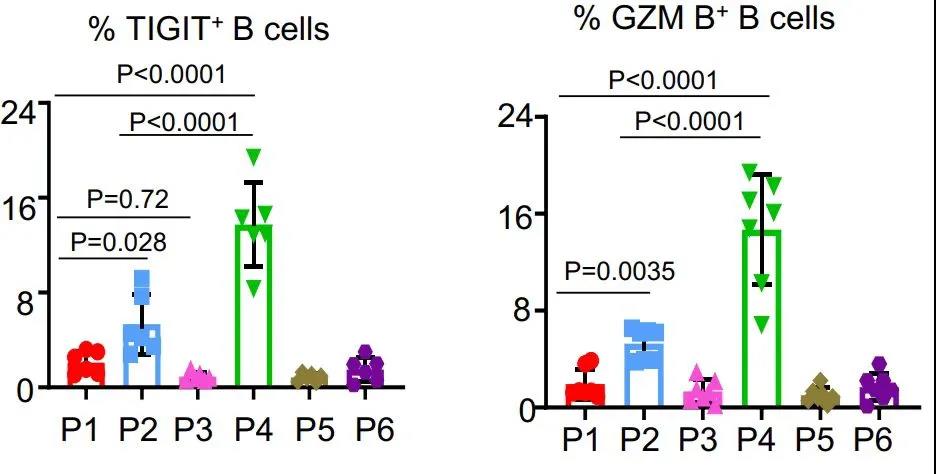 In addition to TIGIT, the expression of GZMB levels in P2 MZ-like and P4 memory B cells also increased in response to CpG-B.

Blocking TIGIT with anti-TIGIT antibody can partially restore the expression of IFN-γ and IL-17 when CD4+T cells are co-cultured with CpG-activated P4 memory B cells. 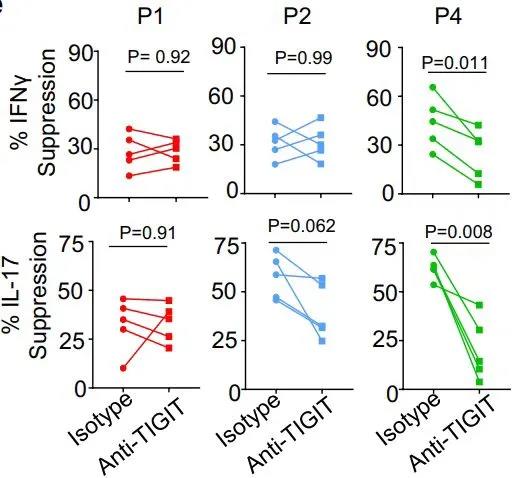 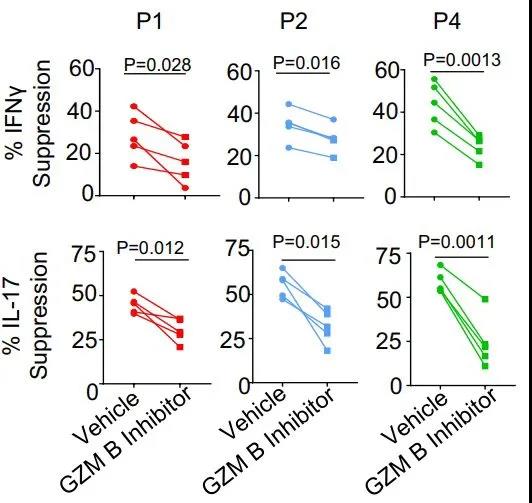 In addition, although all B cell subgroups (P1–P6) express TGF-β1, P2, especially P4 memory B cells express the highest level of TGF-β1. The use of anti-TGF-β1 antibody also resulted in increased expression of IFN-γ and IL-17 in CD4+ T cells co-cultured with CpG-B-activated P4 memory B cells. 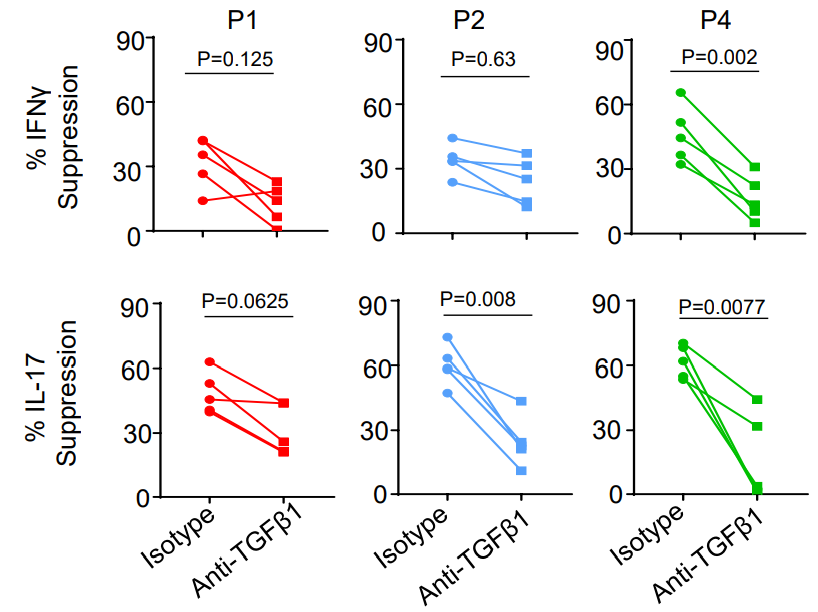 In short, P4 memory B cells further suppress the immune response by expressing the increased levels of TIGIT, granzyme B and TGF-β1.

Regulation of TIGIT+Memory B Cells on Immune Response

In addition, the IL-12A and IL-6 expressed by MDDC co-cultured with TIGIT+ memory B cells were also significantly reduced. These data indicate that TIGIT+ memory B cells can inhibit DC maturation and the expression of pro-inflammatory cytokines. Dendritic cells are the main antigen-presenting cells that can effectively induce and activate inflammation. This additional mechanism of action shown by TIGIT+ memory B cells may play a key role in immune regulation in the body.

However, it is interesting that the CD4+ T cell response to IL-10 produced by MDDC regulated by TIGIT+ memory B cells was significantly enhanced. 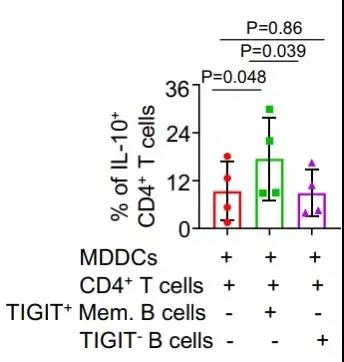 Collect samples from patients 2-5 years after liver transplantation (N=16), and analyze the Breg subgroups in the blood of allograft recipients and found that compared with normal people and serum donor-specific antibody (DSA) negative patients In positive patients, P2 and P4 memory B cells were significantly reduced, while P1 B cells did not have a similar trend.

This indicates that regulatory B cells, especially P4 memory B cells expressing surface TIGIT, play an important role in the immune regulation of allograft patients.

TIGIT is an inhibitory receptor. TIGIT expressed on Treg promotes its inhibitory function by limiting the pro-inflammatory Th1 and Th17 response. The same inhibition of CD4+ T cells is also observed in TIGIT+ memory B cells. TIGIT on memory B cells can directly act on CD155 expressed on activated T cells, thereby inhibiting T cell responses.

In short, although Breg cells can suppress T cell responses, TIGIT+Breg cells are more effective in suppressing immune responses. This is not only because they can efficiently express a variety of immunomodulatory molecules, including IL-10, PD-L1, TGF-β1 and granzyme B, etc., but also can inhibit the maturation and function of DC cells through the action of surface TIGIT. In vitro data from blood samples from patients with allogeneic liver and kidney transplants further support the importance of TIGIT+ memory B cells in immunosuppression.