The 39-year-old Emily Dumler was very happy to be a full-time mother of three children until she was diagnosed with an aggressive and deadly malignant tumor-non-Hodgkin’s lymphoma. I felt that my life was threatened never before.

After many treatments, relapses, and failures, she went round and round to try CAR-T clinical trials. Since then, her life has begun to reverse. Surprisingly, she has been in complete remission for two and a half years!

6 courses of chemotherapy, recurrence after 7 months, a long way to fight cancer for patients with malignant tumors

In August 2013, Emily had undergone splenectomy before going to MD Anderson for treatment and received all the drugs that may increase the platelet count, but after 43 days in the hospital, he was officially diagnosed with diffuse large B-cell lymphoma .

Diffuse large B-cell lymphoma is the most common type of non-Hodgkin’s lymphoma, accounting for almost 1/3 of all cases. This type of lymphoma accounts for most cases of previously clinically “aggressive” or “moderate to high-grade” lymphoma.

Emily initially underwent 6 courses of “R-CHOP” chemotherapy. The treatment was effective at first, but it was unsatisfactory. After 7 months, the scan showed that the cancer had recurred or never really disappeared. After refreshing herself, Emily began to prepare for font stem cell transplantation, hoping to save her immune system through autologous cells after high-dose chemotherapy.

After trying a variety of therapies, she was devastated, and she found hope twice

When the high-dose chemotherapy failed, Emily was considering the next best option-allogeneic stem cell transplantation, which is a stem cell therapy that uses self-donors, but based on the possible impact of allogeneic transplantation, Emily decided to go Seek a second diagnosis and treatment opinion.

Dr. MD Anderson suggested that she still use her own stem cell therapy. In January 2015, Emily underwent an autologous stem cell transplant. Unfortunately, the treatment failed.

When learning that the cancer has not been cured and the future is a little bleak, Emily falls into despair. At this time, the local doctor told her that the only chance of cure was CAR-T cell immunotherapy.

CAR-T cell therapy is mainly used to treat leukemia, but multi-center clinical trials are beginning to be mentioned for the treatment of lymphoma. MD Anderson Cancer Center is about to launch its own CAR-T cell lymphoma clinical trial, and Emily has become the lucky one with only one place.

Surviving from desperation, after overcoming the side effects, CAR-T therapy enabled her to be in complete remission for 2 and a half years!

In July 2015, Emily received CAR-T cell infusion at MD Anderson, and she is also the third patient in the world to receive CAR-T cell therapy for non-Hodgkin’s lymphoma. The infusion usually only takes a few minutes, but due to sinus allergies In response, she switched to an intravenous injection of an antihistamine. After ensuring safety, continue to infuse cells.

For Emily, the side effect experienced is the “cytokine release syndrome”. It is happily that after the doctor’s meticulous treatment of the syndrome, until the review in August, the body feels that it has returned to normal. The best news is that her disease is also in complete remission and has been maintained for 2 and a half years!

T cells are activated through genetic engineering technology and installed with a “positioning navigation device” CAR, which specifically recognizes tumor cells in the body, and releases a variety of effect factors through immunity to effectively kill tumor cells, thereby achieving the goal of treating malignant tumors. 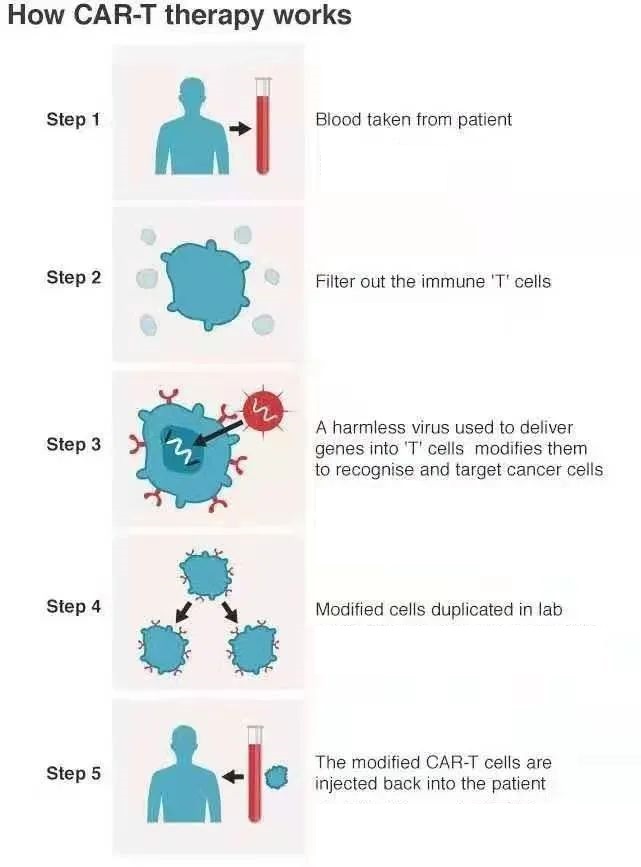 In addition to the patient cases mentioned above, the editor will explain to cancer friends the quite out-of-the-loop clinical research in non-Hodgkin’s lymphoma.

On February 19, 2021, a long-term study published in the New England Journal of Medicine showed that 60% of the included B-cell lymphoma patients were still in remission after receiving CAR-T therapy Kymriah for 5 years period! This discovery is the longest follow-up data of CAR-T cell therapy approved by the U.S. Food and Drug Administration for the treatment of relapsed or refractory large B-cell lymphoma.

Among 24 patients with diffuse large B-cell lymphoma (the most common non-Hodgkin’s lymphoma), they had received standard treatment and then received Kymriah treatment after the cancer recurred.

Among them, 46% of patients were in complete remission after 5 years, and 31% of patients reached progression-free survival within 5 years of age.

In 14 patients with relapsed or refractory follicular lymphoma,  Among them, 71% of patients were in complete remission after 5 years, and 43% of patients reached progression-free survival within 5 years.

74% of patients have sustained remission for over 18 months! Gilead CAR-T for another case

Recently, Kite Pharma announced that the US FDA has accelerated the approval of the CAR-T therapy Yescarta to expand its indications for the treatment of adult patients with relapsed/refractory follicular lymphoma (FL). They have received at least two systemic treatments. The press release stated that this is the first CAR-T cell therapy approved for the treatment of patients with indolent follicular lymphoma.

This approval is based on the results of a single-arm, open-label study called ZUMA-5. The test results showed that 91% of patients with relapsed/refractory follicular lymphoma responded to Yescarta, of which 74% of patients were in continuous remission at 18 months of treatment. At a median follow-up time of 14.5 months, the median remission time has not yet been reached.

In the face of cancer cells, the pace of human research will not stop. Whether it is hematological tumors or solid tumors, CAR-T therapy can play its advantages and achieve precise treatment, which is expected to bring breakthroughs to all cancers.