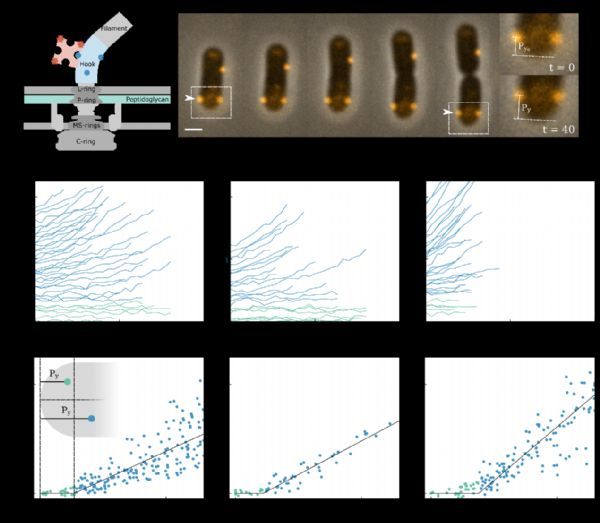 The growth and division of cells are important life processes. It is very important to maintain a stable cell shape during cell growth and division, which is often achieved by sophisticated regulatory mechanisms. In bacteria, the shell structure of a cell is composed of a cell membrane (mainly containing phospholipid molecules) and a cell wall (mainly containing peptidoglycan molecules). In addition to maintaining the shape of the cell, the shell structure of bacteria also provides mechanical support for balancing the osmotic pressure. During the growth and division of bacteria, under the action of cytoskeleton proteins and a series of enzymes, the bacterial cell wall undergoes dynamic changes such as extension, remodeling, and breakage. Although the chemical composition and microscopic connection of peptidoglycan molecules have been fully studied, there are still many unknowns about how the synthesis and insertion of peptidoglycan molecules at the cellular level can change the morphology of bacterial cell walls. Previous studies have initially realized the qualitative measurement of cell wall insertion patterns by introducing fluorescent D-type amino acids into bacterial cell wall synthesis. However, there are still big challenges in analyzing the quantitative laws of bacterial cell wall synthesis with high temporal and spatial resolution in living cells.

After the insertion and extension of peptidoglycan molecules in the known “active zone” are spatially uniform, the researchers took the cell center as the origin and introduced a new normalized coordinate system (the coordinate of the fluorescent BFM relative to the cell center divided by the cell length). In this normalized coordinate system, when the bacteria grow without dividing, the coordinates of each fluorescent BFM are constant. The researchers tracked the bacteria undergoing cell division and found that the spatial position of the fluorescent BFM after entering the daughter cell can be predicted by a simple Bernoulli shift map model

The researchers explored the physiological significance of bacterial cell wall anchoring proteins following the Bernoulli shift map model during cell division. Using two-color fluorescent labeling, they monitored the spatial position of the newly generated BFM after bacterial division and found that they prefer to concentrate in the middle of the bacteria, which may be related to the position of the gene transcribing BFM on the bacterial DNA that is biased toward the middle. However, an important feature of the Bernoulli shift map is that it can quickly erase the unevenness of the spatial distribution, so only after one cell division, it can cause the BFM to tend to a uniform spatial distribution on the bacterial surface, which is conducive to bacterial swimming and Tendency.