Auto-allergic: IgE-mediated with both autoimmune and allergic characteristics

Auto-allergic: IgE-mediated with both autoimmune and allergic characteristics.   IgE autoantibody-mediated autoimmune diseases, which can also be called autoallergy, are still in the preliminary stage of research.

Other autoimmune diseases, such as autoimmune uveitis, rheumatoid arthritis, hyperthyroidism, and autoimmune pancreatitis, are not very clear yet, and evidence of auto-allergies is accumulating.

The following table IgE autoantibodies have been detected in a variety of diseases (Document 1). 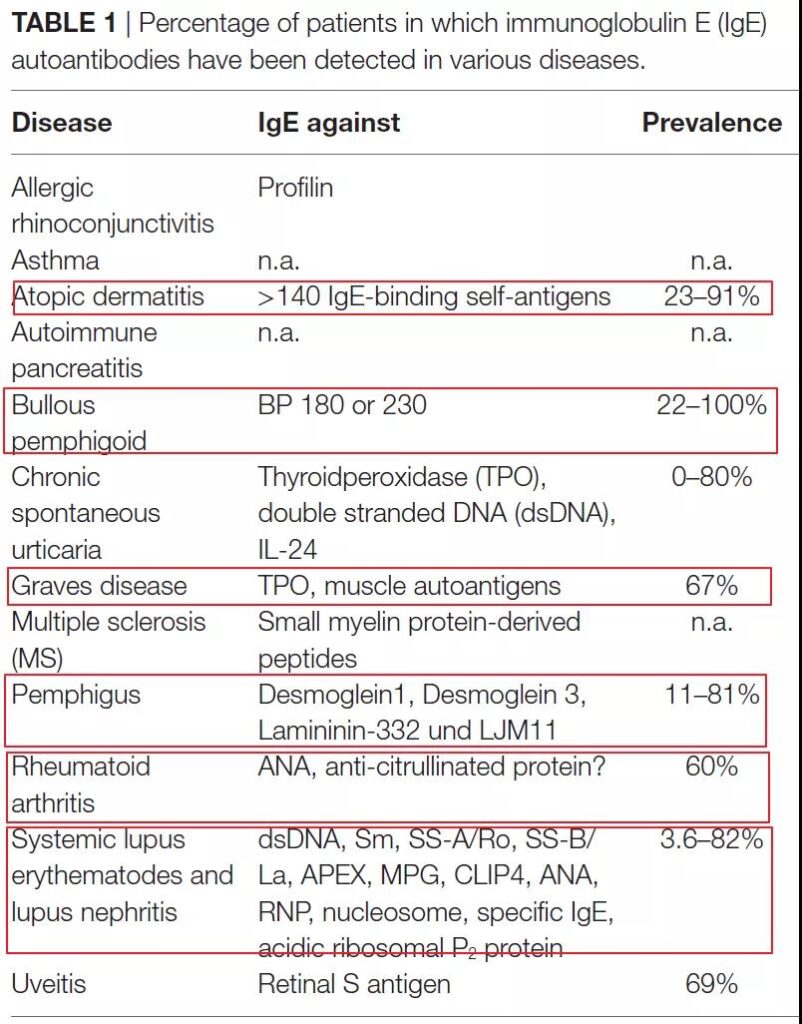 Systemic lupus erythematosus (SLE) is a multifactorial chronic autoimmune disease characterized by the presence of autoantibodies against nuclear antigens of different isotypes. The pathogenic mechanism of IgE antinuclear antibodies has also begun to be studied in depth. 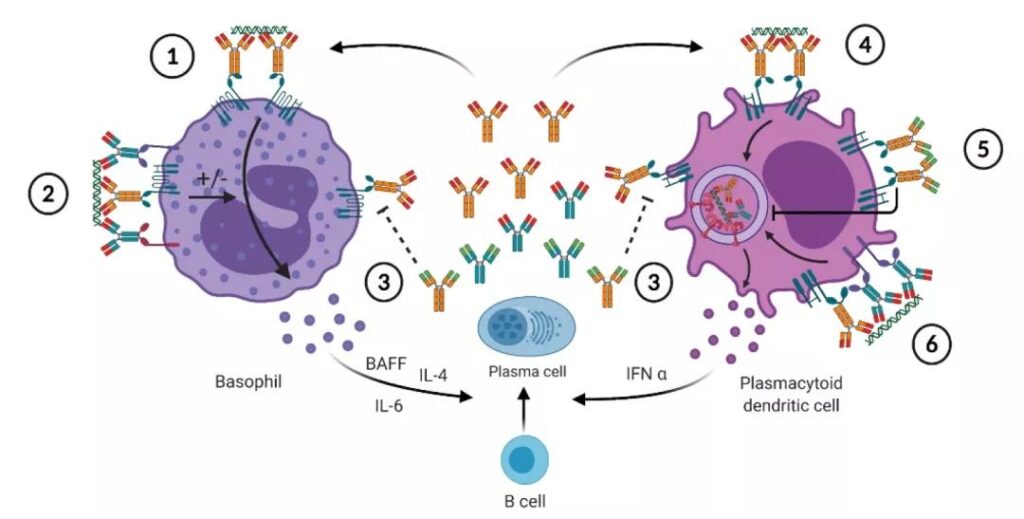 In immune complexes, IgE and IgG auto-reactive antibodies bind to autoantigens and can aggregate to activate Fc receptors (FceRI, FcγRIIA) and inhibitory receptors (FcγRIIB). This can regulate (enhance or inhibit) the self-reactive IgE-mediated activation signal, and cause basophils to migrate to the secondary lymphocyte organs instead of degranulation, secrete cytokines, and affect the function of self-reactive B and T cells.

Self-reactive IgE and IgG bind to FceRI and FcγRIIA on the surface of pDC, and then deliver these immune complexes to the phagosomes involved in TLR9, leading to the secretion of IFN and promoting the differentiation of B cells.

Non-self-reactive IgE cross-links FceRI to inhibit the activation of pDC by reducing the expression of TLR7 and TLR9 and inhibiting the migration of lysosomes. 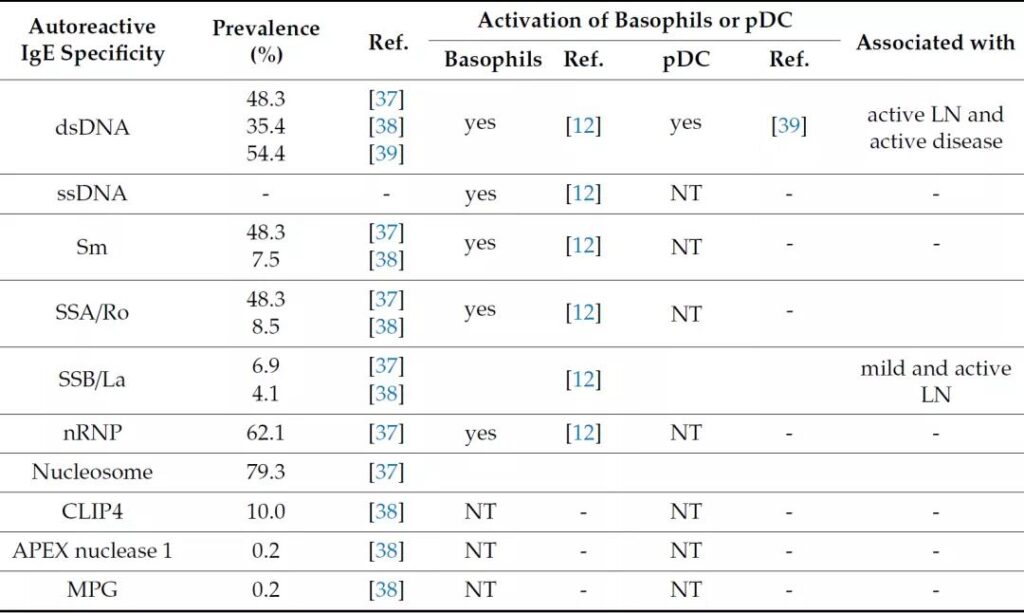 The pathophysiology of atopic dermatitis (AD) is highly complex, and IgE autoantibodies against skin epitopes are thought to play a role in disease progression and prolongation.

For example, Malassezia furfur or Aspergillus fumigatus has cross-reactivity with human thioredoxins (Trx) proteins, so IgE antibodies against these allergens will bind to human thioredoxins. Fungal-derived MnSOD can also induce humoral responses to human MnSOD based on molecular simulations. The results showed that MnSOD-specific IgE was related to disease activity in 29/67 AD patients.

Structural homology is unlikely to be a single way to cause an autoimmune response. Other factors such as loss of central tolerance, bystander activation, and environmental or genetic factors also play a role in the development of autoimmunity. 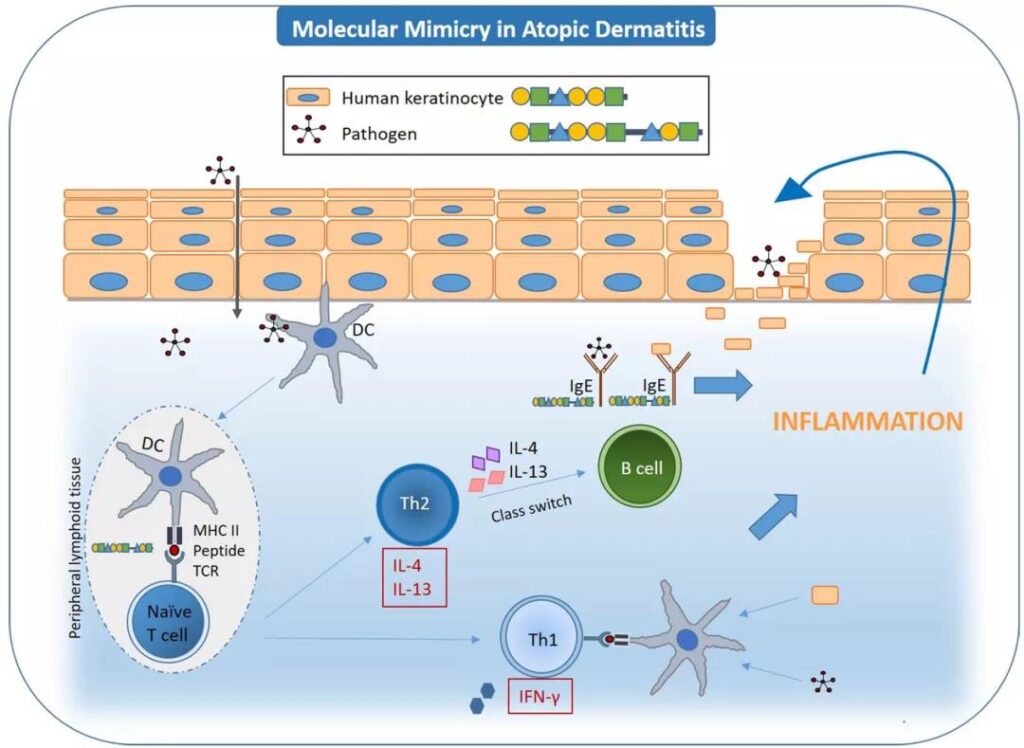 Tissue damage or impaired barrier function is essential for the development of allergies. In addition to genetic mutations that promote barrier defects, skin damage may be caused by mechanical stress, such as scratching.

The endogenous proteins released after tissue injury can initiate self-reactive T and B cells and become specific targets for autoantibodies. The role of epitope expansion is difficult to prove in humans, but it is likely to cause AD.

Tissue fragments can be presented on MHC-II molecules through peripheral antigen-presenting cells (APCs) in lymphoid tissues to activate and induce Th1 cell differentiation.

The activated and differentiated Th1 cells may migrate to the skin, where they are activated by the resident APCs presenting their own antigens, releasing a series of inflammatory factors, etc., causing skin damage. 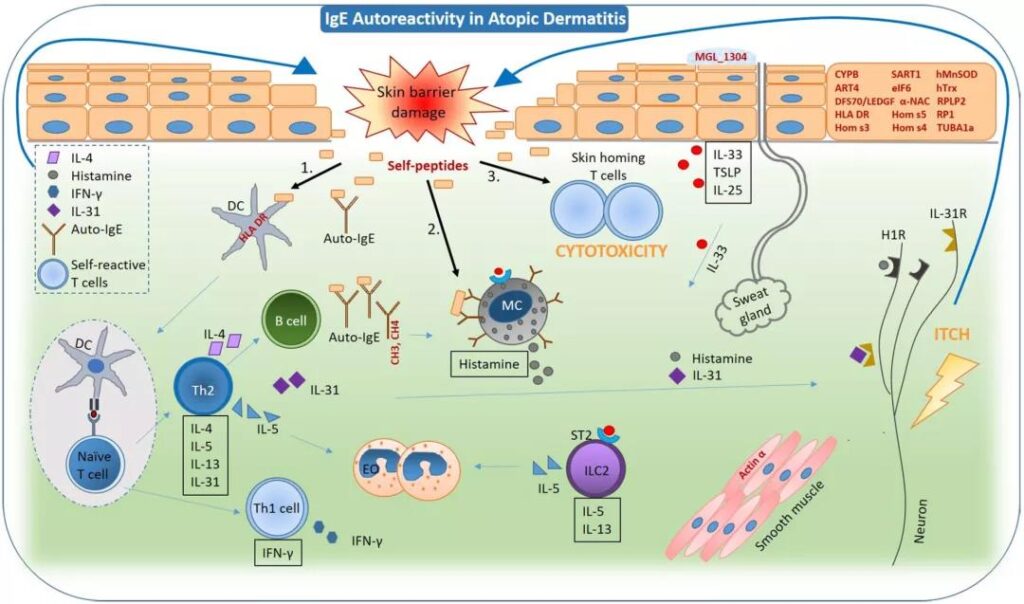 Mast cells sensitized by IgE autoantibodies can directly interfere with the self-peptides released after skin injury, leading to the release of histamine. T cells with low affinity that bind to their own peptides can evade selection and depletion of the thymus.

These cells may also be attracted to the skin, where they are exposed to damaged skin’s own peptides. Cytokines (IL-4 and IFN-γ) produced by T cells and histamine produced by mast cells can directly aggravate skin damage.

In addition, neurons in the skin bind to histamine and IL-31, which can cause itching and possibly the long-term impaired barrier function.

Auto-allergies have the characteristics of both allergies and autoimmune diseases, and both should be considered in both basic research and clinical practice.