The most important point of bispecific antibody design is how to improve the correct assembly of the antibody and reduce the mismatch between antibody chains.

The OAscFab-IgG technology was developed by the Roche team. The antibody design is mainly connected by (G4S)6GG 32 amino acid linker. 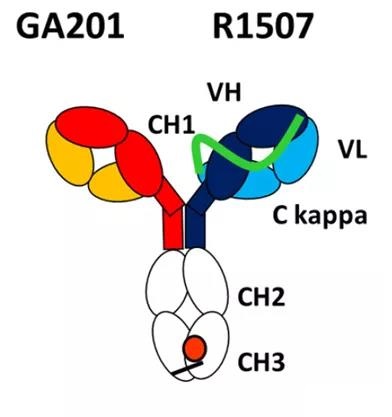 The LUZ-Y technology was invented by the Eli Lilly team. It mainly uses Acid.p1 (Ap1) and Base.p1 (Bp1) to form a parallel heterodimer, and the two peptides are added to the C-terminus of the antibody heavy chain.

After expression, the content of heterodimer is increased through the interaction between Ap1 and Bp1.

At the same time, to prevent the light chain error of the antibody Match, introduce the GGGS linker between the same antibody VH and CL (the black line in Figure 2).

At the same time, the antibody’s light chain constant region CL is co-expressed with the two modified heavy chains, and CL combines with the CH1 of the antibody heavy chain by intermolecular forces and forms a stable disulfide bond.

The design of LegoBody mainly uses thrombin (Thrombin), which has strong cleavage sequence specificity and high hydrolysis efficiency, and is widely used to cut tags.

After the antibody is purified, the linker is cleaved by thrombin to form a bispecific antibody without linker. 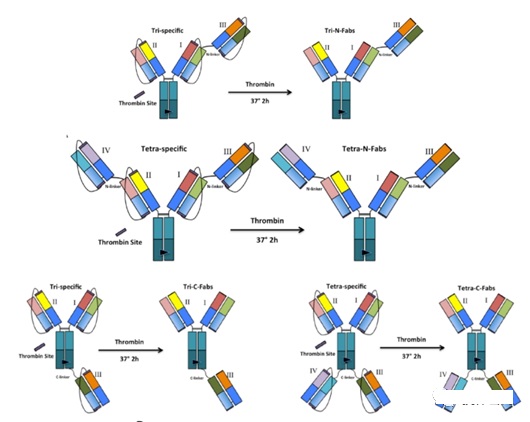 Among the currently known bispecific antibody platforms, these four linker platforms are used to prevent mismatches between antibody heavy and light chains.

Among them, the Linker in the LUZ-Y and LegoBody platforms can be removed by later enzyme digestion treatment.

LUZ-Y mainly uses furin and carboxypeptidase B to remove linker and residual amino acids, but it is necessary to introduce a point mutation K222A at position 222 of the hinge region of the heavy chain (to prevent non-specific cleavage by the enzyme).

LegoBody mainly uses thrombin to remove the linker, but there will be amino acid residues. The linker in the tcBsIgG and OAscFab-IgG platforms is part of the antibody and cannot be removed by later technology.