US President Biden will remove former President Trump’s funding restrictions on the use of human fetal tissues produced by selective abortions for medical research. 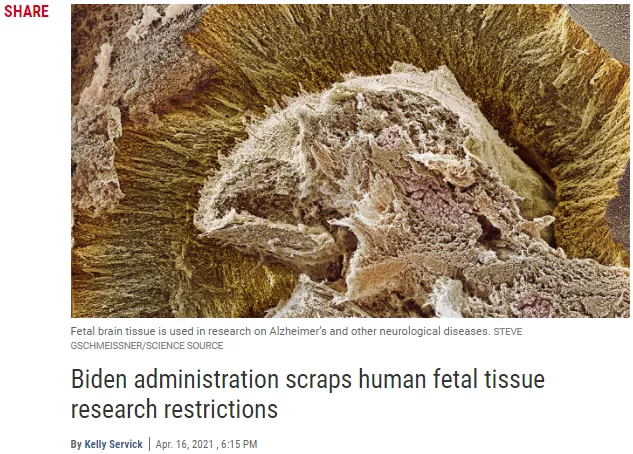 This policy announced by the Trump administration in June 2019 prohibits NIH internal scientists from using human fetal tissues for research, and has also set up new barriers for external applicants, including an ethics advisory committee, which is composed of scientists who oppose abortion and Ethicists dominate.

In August 2020, the committee rejected 14 applications that were deemed worthy of funding by scientific reviewers, and only one survived.

“It’s a farce.” said Lawrence Goldstein, a neuroscientist at the University of California, San Diego, who is the only member of the advisory board who bluntly supports fetal tissue research.

“Very valuable projects have passed multiple levels of scrutiny… but they are ‘dead’ before this committee.”

According to the new announcement, the advisory committee will no longer hold meetings. An NIH spokesperson confirmed that NIH internal research involving fetal tissue can be resumed.

These fetal tissues are essential for the study of the nervous system and infectious diseases and for understanding the normal development of the fetus.

In March 2020, research institutions and medical foundations called on the Trump administration to lift these restrictions in order to conduct research on the new coronavirus.

The International Association for Stem Cell Research (ISSCR) wrote in a statement that fetal tissues “remain indispensable for studying HIV, Zika, Coronavirus, and other viral infections,” and the association praised this policy reversal as “returning” Evidence-based policy development”.