Anesthesia and circulating tumor cells in patients with primary breast cancer.  Breast cancer is a major health problem: there are more than 2 million new cases worldwide, it is the most common tumor and the main cause of cancer death in women. Despite primary treatment, 6% of patients with localized tumors and 22% of patients with lymph node metastasis will face recurrence within 5 years.

In surgical treatment, anesthesia may help the long-distance spread of cancer. In non-metastatic and metastatic breast cancer, the presence of circulating tumor cells is independently associated with a higher risk of disease recurrence and reduced survival.

In 2020, Hovaguimian, F and others published a randomized controlled study titled “Anesthesia and Circulating Tumor Cells in Primary Breast Cancer Patients” in “Anesthesiology”, which evaluated the effects of different anesthesia methods on circulating tumor cell counts after breast cancer surgery. (Independent prognostic factors of breast cancer) to determine how anesthesia indirectly affects the prognosis of patients. The introduction is as follows: 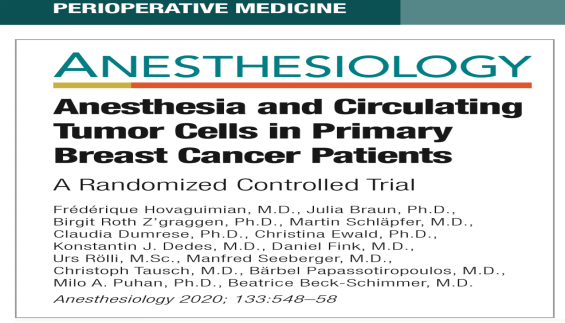 Most breast cancer patients undergo surgery. However, more and more patients worry that the perioperative period will directly or indirectly promote tumor spread, because systemic inflammation may affect the immune response to tumor cells. Evidence also suggests that anesthesia itself may cause tumors to spread over long distances: anesthetics seem to directly interfere with tumor cell biology and reduce the activity of natural killer cells, which play a vital role in tumor cell destruction and tumor growth.

Previous studies on the effects of intravenous anesthesia and inhalation anesthesia on the prognosis of cancer are of low quality. Therefore, large, well-designed randomized controlled trials are needed to clarify the effects of anesthetics on the prognosis of cancer, but long follow-up periods often destroy this Study the feasibility. To overcome this problem, the use of biomarkers as a surrogate for evaluating prognosis may be a valuable method. Among them, the presence of circulating tumor cells in peripheral blood is a particularly promising indicator. Monitoring this indicator may provide a better understanding of the effect of anesthesia on perioperative tumor behavior.

This is a parallel group, randomized controlled trial. The inclusion criteria: aged between 18 and 85 years old, diagnosed as primary pre-invasive and invasive breast cancer, and no distant metastasis (stage 0 to stage III), Patients who plan to undergo or do not undergo axillary lymph node dissection. Exclusion criteria: preoperative chemotherapy, possible immune damage (such as autoimmune diseases, human immunodeficiency virus, other active cancers, ASA IV or V), immunosuppression or chronic opioid therapy, secondary surgery (such as relapse, reconstruction ), or general anesthesia accompanied by regional anesthesia (such as epidural catheters, paravertebral block, local anesthetic infiltration of the wound), patients with known or suspected hypersensitivity or allergies to anesthetics.

The patients were randomly divided into intravenous anesthesia (propofol group) and inhalation anesthesia (sevoflurane group) at a ratio of 1:1. Standardized doses were used for induction of anesthesia in both groups: fentanyl (2～3ug/kg), thiopental sodium (4～6mg/kg) and rocuronium (0.6mg/kg). Patients who need rapid sequential induction Rocuronium 0.9 mg/kg was given intravenously. The further use of fentanyl during the operation follows the standard protocol (ie: 2μg/kg; total amount 5-10μg/kg). In the propofol group, the target-controlled infusion device was used to maintain anesthesia, and the dose of propofol was adjusted to keep the BIS value between 40-60; in the sevoflurane group, the concentration of sevoflurane was adjusted to keep the BIS value between 40-60.

Between March 10, 2014 and April 10, 2018, 586 patients underwent eligibility assessment (Figure 1). Among the 217 participants included, 7 patients withdrew their consent after randomization. We finally included 210 patients for the intention-to-treat analysis (107 in the sevoflurane group; 103 in the propofol group). 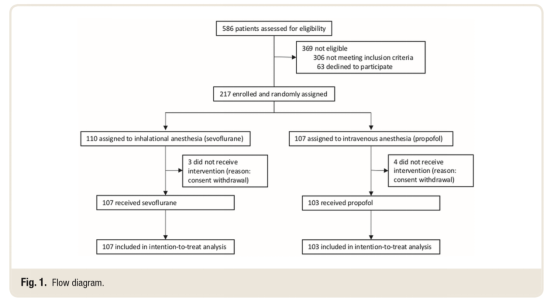 In the exploratory model, the effect of inhalation anesthesia on the maximum circulating tumor cell value after surgery is still significant (sevoflurane vs propofol: rate ratio, 1.26 [95% CI, 1.09-1.47]; P=0.002; adjust tumor type , Size and dosage of opioids). 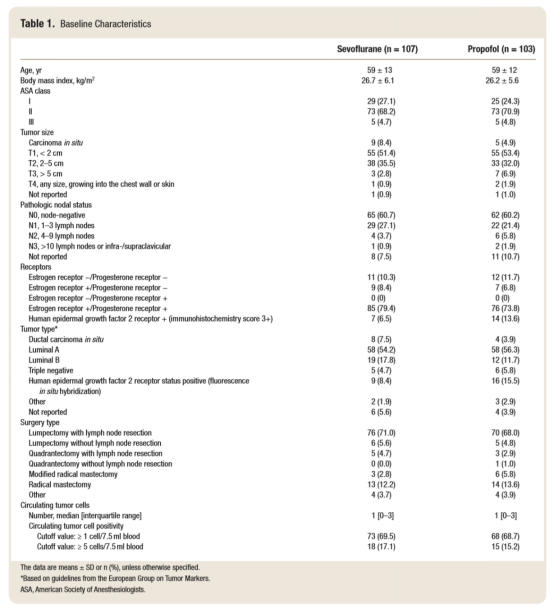 Sixty patients (30 in the sevoflurane group and 30 in the propofol group) were randomly selected for in vitro exploratory analysis. The two groups of natural killer cells induced similar apoptosis rates (the average apoptosis rate in the sevoflurane group was 34.7%; 35.7% in the propofol group). There is no evidence of linear regression that there is an association between the apoptosis rate and the maximum circulating tumor cell count (regression coefficient, -0.077; 95% CI, -0.33-0.17; Figure 3). 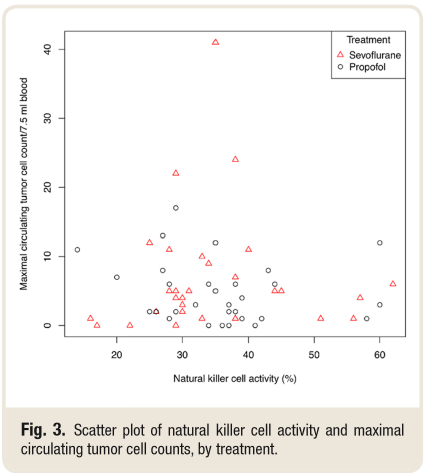 This trial explored the effect of anesthesia on the independent prognostic factor of breast cancer-the perioperative circulating tumor cell count. Compared with previously published randomized studies, our study is larger, has sufficient control groups, and alleviates the problem of long-term follow-up by using prognostic factors.

In addition to the first and second analysis, our research results are in contrast with many previously published studies (showing that the use of intravenous anesthesia is better). There are two potential reasons for this difference. First of all, the previous research report is a retrospective data analysis, which is prone to bias and confusion. Second, the evidence for the protective effect of propofol comes in part from in vitro studies, which may not reflect the subtle interaction between immune cells and tumor cells observed in vivo. However, our findings are consistent with the recently published large randomized controlled trial on the effects of local anesthesia and general anesthesia on breast cancer recurrence. Although this trial was not specifically designed to compare inhalation and intravenous anesthesia, most patients under general anesthesia use sevoflurane, while patients under regional anesthesia use propofol. Consistent with our study, this trial showed no difference in cancer outcome between the two groups.

Breast cancer is a major health problem: there are more than 2 million new cases worldwide, it is the most common tumor and the main cause of cancer death in women. Despite primary treatment, 6% of patients with localized tumors and 22% of patients with lymph node metastasis will face recurrence within 5 years.

The effect of anesthetics on the prognosis of cancer is still unclear. Hematological dissemination seems to occur long before clinical or radiological signs of metastasis appear. The presence of tumor cells in the peripheral blood circulation is a particularly promising indicator.

A second analysis showed that propofol had a beneficial effect on the maximum circulating tumor cell value after surgery. However, this study has certain limitations, and the results need to be interpreted cautiously. First, it is assumed that the circulating tumor cell count is a prognostic factor that measures the impact of anesthesia on the risk of tumor recurrence, but no long-term outcome analysis has been performed to confirm this hypothesis.

Although many tumor markers seem to be ideally regarded as the cause of distant metastasis, other factors are ultimately required to participate together, and the ability to predict tumor prognosis is uncertain. Second, the exact meaning of the changes in circulating tumor cells during the perioperative period is unclear.

However, circulating tumor cell testing lasts for several weeks or months, and there is no conclusive evidence that these findings are also applicable to the recent and fairly short perioperative period.

Other limitations are inherent in the cell search analysis itself. Although the EpCAM+/CK+/DAPI+/CD45- pattern is a widely accepted characteristic of molecular circulating tumor cells, other combinations may also occur: for example, it is believed that 7.8 to 10.3% of breast cancers may lack EpCAM expression.

Finally, in vitro analysis was performed on only 60 patient samples, thus limiting the comprehensive assessment of the link between the rate of natural killer cell-induced apoptosis and circulating tumor cell counts. In the future, more trials that collect long-term outcomes are needed to provide further evidence for the possible effects of anesthesia during cancer surgery.