Will the mRNA vaccine be the hope of human society?

So what exactly is an mRNA vaccine? How was it discovered and what application value does it have? Can it resist COVID-19, which is raging around the world?  Today we will learn about the past and present of mRNA vaccines.

01. What is the mRNA in the mRNA vaccine?

mRNA (Messenger RNA), or messenger RNA, is a type of single-stranded RNA that is transcribed from a strand of DNA as a template and carries genetic information that can guide protein synthesis. Generally speaking, mRNA replicates the genetic information of a strand of double-stranded DNA in the nucleus, and then leaves the nucleus to produce proteins in the cytoplasm. In the cytoplasm, the ribosome moves along the mRNA, reads its base sequence, translates it into its corresponding amino acid, and finally forms a protein (Figure 1). 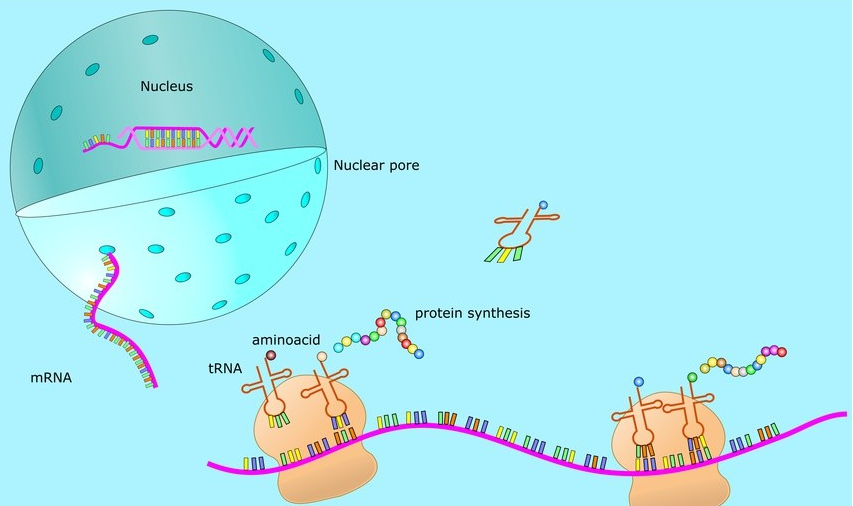 02. What is an mRNA vaccine and what is unique?

The mRNA sequence of specific antigens can usually be constructed according to different diseases, packaged and transported into cells by new lipid nanocarrier particles, and then translated by human ribosomes to produce disease antigen proteins, which are recognized by the immune system to produce an immune response after secretion , So as to achieve the role of disease prevention (Figure 2).

So, what is unique about this type of mRNA vaccine compared with traditional vaccines? The mRNA vaccine is the most cutting-edge third-generation vaccine, and it needs to be developed to enhance its stability, adjust its immunogenicity, and develop new delivery technologies.

The first-generation traditional vaccines mainly include inactivated vaccines and live attenuated vaccines, and are the most widely used. Inactivated vaccines refer to the cultivation of viruses or bacteria, and then use heat or chemical agents (usually formalin) to inactivate them; live attenuated vaccines refer to pathogens that undergo various treatments and mutate and become less toxic. But still retains its immunogenicity. Inoculating it into the body will not cause disease, but the pathogen can grow and multiply in the body, trigger the body’s immune response, and play a role in obtaining long-term or lifelong protection.

The third-generation frontier vaccines include DNA vaccines and mRNA vaccines. That is, the viral gene fragment (DNA or RNA) encoding a certain antigen protein is directly introduced into animal cells (vaccine is injected into the human body), and the antigen protein is produced through the protein synthesis system of the host cell to induce the host to produce immunity to the antigen protein Respond in order to achieve the purpose of preventing and treating diseases. The difference between the two is that DNA is first transcribed into mRNA and then protein is synthesized, while mRNA is directly synthesized.

The advent of the mRNA vaccine has three important nodes.

In the first step, she succeeded in producing the desired mRNA molecules through cell culture, but she ran into a problem in order to make the mRNA work in the body: the mRNA would be swallowed by the mouse’s immune system after injecting it into the mouse. Then she met Weissman. They used a molecule called pseudouridine in tRNA to make mRNA evade the immune response and published a series of high-level articles. However, the human defense system could not break through the bottleneck when it saw the mRNA attack and destroy [1 ][2].

In the second step, around 2000, Professor Pieter Cullis studied lipid nanotechnology LNP for in vivo delivery of siRNA for gene silencing applications [3] [4]. Weissman’s study by Kariko et al. found that LNP is a suitable carrier for mRNA in the body and may become a valuable tool for delivering mRNA encoding therapeutic proteins. It was subsequently verified in the prevention of Zika virus, HIV and tumors [5 ][6][7][8].

Nowadays, mRNA vaccines can be used in infectious diseases, tumors, and asthma. With COVID-19 raging around the world, mRNA vaccines may play a role as the vanguard.

04. The application prospects of mRNA vaccines in COVID-19

With the global pandemic of COVID-19, countries are working hard to research vaccines used to curb the COVID-19 epidemic. As a new type of vaccine, the mRNA vaccine has played a leading role in the coming of the COVID-19 epidemic. Many top journals have reported the role of mRNA in the SARS-CoV-2 new coronavirus (Figure 3).

First of all, many scientists have reported on the study of the new coronavirus-based mRNA vaccine (SARS-CoV-2 mRNA) in mice. For example: lipid nanoparticle-encapsulated-nucleoside modified mRNA (mRNA-LNP) vaccine, a single injection can induce strong type 1 CD4+ T and CD8+ T cell responses, long-lived plasma and memory B cell responses, and powerful and Continuous neutralizing antibody response. This shows that the mRNA-LNP vaccine is a promising candidate against COVID-19 [9] [10].

Then, as the SARS-CoV-2 mRNA candidate vaccine entered clinical trials, people were concerned about the short protection period of the vaccine. Scientists have developed a lipid-encapsulated nucleoside modified mRNA vaccine called mRNA-RBD. A single injection can produce powerful neutralizing antibodies and cellular responses, and can almost completely protect model mice infected by the new coronavirus, and the high levels of neutralizing antibodies have been maintained for at least 6.5 months. These data indicate that a single dose of mRNA-RBD can provide long-term protection against SARS-CoV-2 attacks [12].

There are also scientists who are committed to developing new safe and effective anti-COVID-19 vaccines, such as the BNT162b vaccine. It can protect macaques from SARS-CoV-2, protect the lower respiratory tract from viral RNA, produce high-efficiency antibodies, and show no signs of disease enhancement. Two candidates are currently being evaluated in the Phase I trial, and the evaluation in the global Phase II/III trial is also underway, and the distance application is just around the corner [13].