What are characteristics of the one whose tumor disappeared completely？

What are characteristics of the one whose tumor disappeared completely？ With the same treatment plan and drugs, some patients are ineffective, some can only be controlled, and some can even be cured?

Cancer is difficult to treat, but there are miracles. There is a small number of patients with advanced cancer who have a particularly good effect when receiving treatment, far exceeding expectations, and their survival period is significantly longer than similar patients. They are called “super responders”.

What is so special about these super responders? What makes their treatment effect so good?

Recently, Louis M. Staudt of the National Cancer Institute of the United States analyzed the characteristics of 111 super responders and found out the possible reasons for the excellent treatment effect of about 1/4 of them [1]. These reasons are roughly divided into four aspects: DNA damage repair, signal pathways, immune factors and prognostic genes. Next, let’s take a look at these super responders. 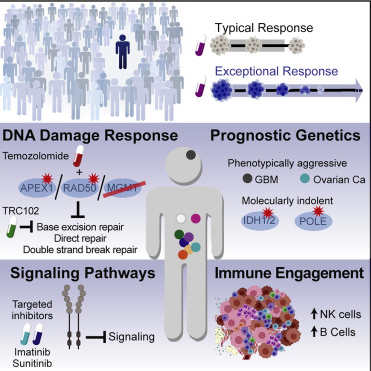 The first super responder was a patient with glioblastoma multiforme, who had received surgical resection, local carmustine chemotherapy and radiotherapy, and then used temozolomide after recurrence, maintaining a complete remission for more than 10 years.

The second super responder was suffering from metastatic colon adenocarcinoma. In a clinical trial, Ta received temozolomide combined with the trial drug TRC102 and achieved a near complete remission of at least 45 months.

Temozolomide is an alkylating agent that causes tumor cell DNA damage and death through the alkylation of DNA. For the DNA damage caused by temozolomide, tumor cells can be repaired by two methods-direct repair and base excision repair.

The study found that the tumor cells of these two super responders had defects in both direct DNA repair and base excision repair, making it difficult to repair the damage caused by chemotherapy. This may be the reason for their excellent curative effect.

In addition, in the trial of temozolomide combined with TRC102, there was a defect in the direct repair pathway of human DNA, base excision repair was normal, and ta was corresponding to the treatment part. The remaining 10 patients whose two DNA repair pathways were normal were not treated. 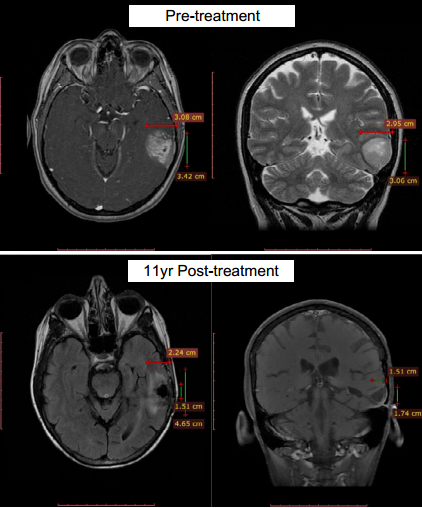 Complete remission after 11 years of treatment

Platinum drugs are another widely used chemotherapeutic agent. They damage DNA through cross-linking and require homologous recombination to repair. Among the 8 super responders who used platinum drugs, 6 of the tumors had BRCA1, BRCA2, or PALB2 mutations.

For example, the third super responder, a HER2-positive metastatic breast cancer patient, was treated with trastuzumab, carboplatin, and docetaxel in complete remission lasting for 7 years.

BRCA1 was completely absent in this patient’s tumor, and BRCA2 and BRIP1 mutations were inactivated. These three proteins are jointly responsible for DNA homologous recombination repair. It is the defects of these three genes that make the patient’s tumor very sensitive to platinum drugs. 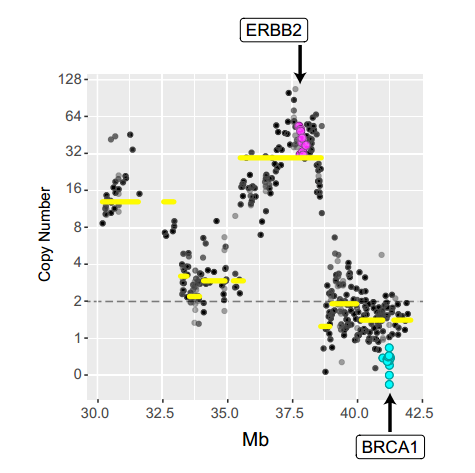 The fourth super responder was an estrogen receptor (ER)-positive breast cancer patient. Her tumor also had a high level of HER2 gene amplification, so she was treated with trastuzumab combined with anastrozole, and achieved a sustained partial response of 2.4 years.

In this patient, although the HER2 gene is highly amplified, the level of HER2 mRNA is very low. Anastrozole should have caused her super response.

Anastrozole is an inhibitor of aromatase CYP19A1, which catalyzes the conversion of testosterone into estradiol in the human body and is a key enzyme for the synthesis of estrogen. The expression of CYP19A1 in this patient is very high, which can be ranked in the top 1.5% of the American Cancer Genome Atlas. Her tumor may be extremely dependent on the estrogen signal produced by CYP19A1. This should be the reason for her excellent treatment effect. 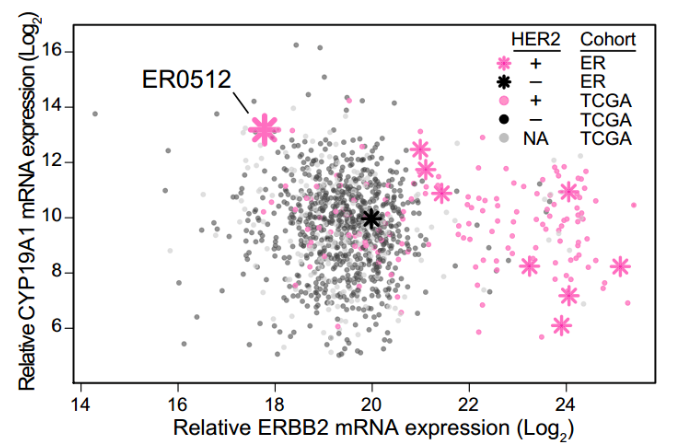 This patient has a high expression of CYP19A1

The fifth super responder suffers from gastrointestinal stromal tumors. Ta was initially treated with imatinib, and then switched to sunitinib after recurrence, achieving complete remission.

In this patient’s tumor, the KIT gene is highly expressed, and the KIT exon 11 is missing, causing the KIT protein to be locked in an activated state.

In addition, several other tyrosine kinases targeted by sunitinib-KDR, FLT1 and FLT3, are also highly expressed in this patient’s tumor, which cannot be inhibited by imatinib [2]. Previous studies have also found that the expression of these genes is related to the therapeutic effect of sunitinib [3,4], which should be the reason for the good therapeutic effect of this patient. 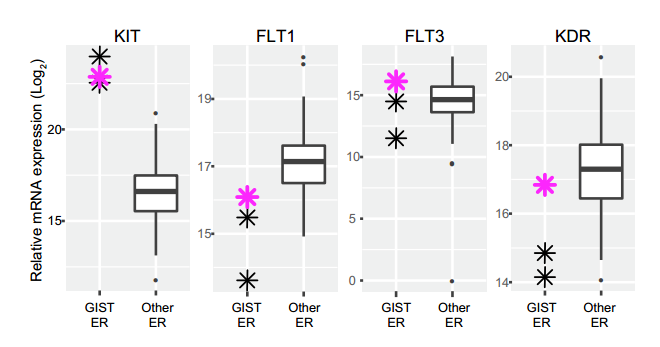 The patient’s tumor KIT, FLT1, FLT3 and KDR are all highly expressed

3. The immune status of the tumor

When it comes to tumors, one has to talk about the human body’s immune system, which is the body’s first line of defense against cancer. The researchers found that these super responders, on the whole, had more B cells and NK cells in tumors than the average patient. The tumors of some of these super responders are unique in terms of immunity.

The sixth super responder is special in terms of immunity. Ta suffers from metastatic urothelial carcinoma. He received PD-1 inhibitor nivolumab treatment after failure of chemotherapy, radiotherapy and surgery, and obtained a complete patient who lasted 7 months. Only about 3% of patients with urothelial cancer who receive similar treatment can achieve such an effect [5].

In this patient’s tumor, the expression of PD-1 and PD-L1 are both high, but this may not be the most important. In Ta tumors, the MDM2 gene and IFN-γ gene were both amplified 32 times.

MDM2 is an oncogene that can inhibit the activity of p53. And IFN-γ can increase the expression of MDM2 and further inhibit p53 [6], making the tumor’s genome more unstable, causing more mutations, and producing more new antigens. In addition, IFN-γ itself also has a complicated role in anti-cancer immunity [7]. The combined effect of these factors may be the reason for this patient’s super response.

What’s more interesting is that the MDM2 gene may be the reason for the good treatment effect of the patient in this case, but there are studies that it is related to the super progress of immunotherapy [8]. The same gene may not only make immunotherapy very effective, but also make immunotherapy super-advanced. 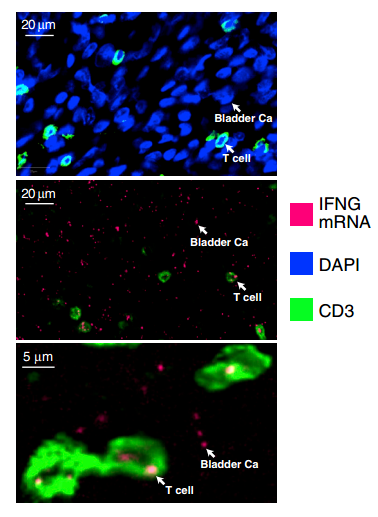 The study also found that several specific gene mutations are related to super response, such as IDH1-R132 mutation and POLE-V411L mutation. These two gene mutations, the former affects DNA methylation, have been proved to be related to the good prognosis of glioma[9], the latter affects DNA replication, causing a large number of mutations, about 100 times that of similar tumors, and resulting in a large number of New antigens affect anti-cancer immunity.

IDH1 mutations are characteristic of the super-response of gliomas

In the study, there is also a super responder with four super responder characteristics at the same time. This is a patient with stage IVb endometrial cancer who has been treated with paclitaxel, carboplatin and temsirolimus for 5.8 years.

In this patient’s tumor, DNA repair-related BRCA2, SLX4, and WRN three gene inactivation mutations make it sensitive to carboplatin, PIK3CA activating mutations and PTEN inactivation mutations make it sensitive to mTORC1 inhibitor temsirolimus MLH1 gene is silenced by methylation to make its microsatellites unstable, resulting in abundant immune cells in the tumor microenvironment, which is a feature of good prognosis.

A patient with four super response characteristics can be said to be the child of destiny. 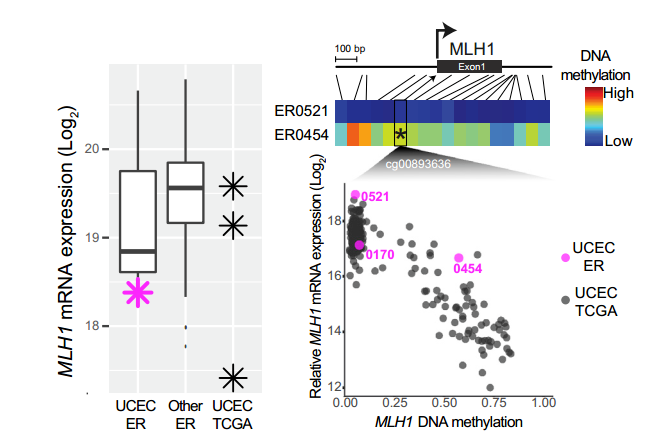