PNAS: The transformation of lung cells or the key to pulmonary fibrosis

A few days ago, in a research report titled “Resetting proteostasis with ISRIB promotes epithelial differentiation to attenuate pulmonary fibrosis” published in the international journal PNAS, scientists from Northwestern University and other institutions found through research that lung epithelial cells failed to complete the recovery process.

Researcher Misharin said that at present, the treatment options for patients with pulmonary fibrosis are limited to lung transplantation, and the other two therapeutic drugs are very limited in efficiency and can produce serious side effects. Therefore, researchers urgently need to develop new drugs to alleviate lung fibers.

The progression of pulmonary fibrosis and reversal of pulmonary fibrosis. Pulmonary fibrosis is a disease in which lung tissue is damaged and scarred. The disease progresses gradually and irreversibly destroys lung function. In the article, the researchers analyzed the cells in the lung epithelium, including flat type 1 epithelial cells and cubic Type 2 cells, the former cells are mainly involved in the gas exchange process between the alveoli and blood, while the latter cells normally produce surfactants. 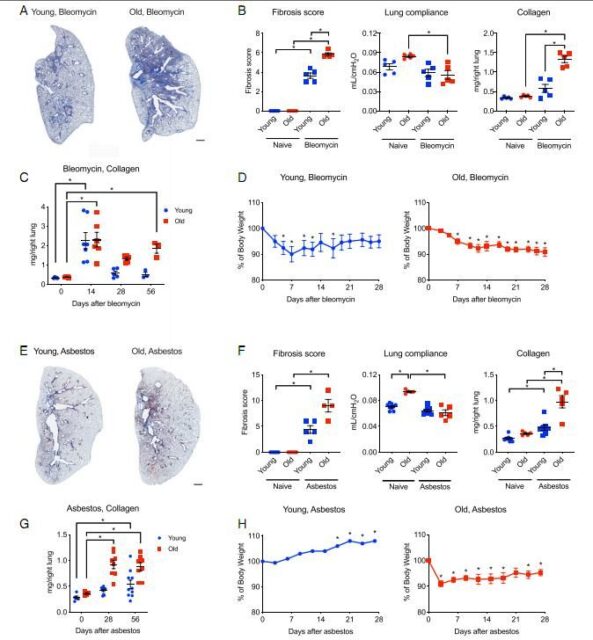 If type 1 cells are damaged or die (which will inevitably happen in a lifetime), type 2 epithelial cells will transform, divide and differentiate into type 1 cells to replace those lost cells. It may play the role of temporary stem cells. In young animals, these epithelial cells will eventually complete this transition, and the experimental pulmonary fibrosis in young mice will eventually resolve itself; in older animals, these type 2 cells will be destroyed in the transitional phase.

“Stuck”, or die, or linger back and forth as alveolar epithelial progenitor cells. If the transitional cells die, the initial lung injury may not be resolved, and the process will be repeated; if these cells are stuck After the transition period, it will drive the recruitment of immune cells and send signals to activate fibroblasts.

The common effect of these cell types is to increase the accumulation of extracellular matrix and lead to the occurrence of pulmonary fibrosis. This transitional process is stressful for epithelial cells. Although cells from young animals can handle this pressure, cells from older animals fail. This is why pulmonary fibrosis occurs in the elderly. The more common cause. In this research report, the researchers found that a small molecule called ISRIB may play a certain role. This molecule can help protein translation, guide the transition from type 2 epithelial cells to type 1 cells, and accelerate epithelial tissue The repair of pulmonary fibrosis in the body can slow down the body’s pulmonary fibrosis; importantly, ISRIB can also play an effective role in young and old mouse models.

The occurrence of pulmonary fibrosis in old mice is related to the increase in the number of alveolar macrophages derived from monocytes.

The researchers pointed out that these cells will reshape and change everything they do, just like moving to another country to start a new job, which may be very challenging and stressful for you. Similar small molecules that target the pressure pathway have entered clinical trials to treat other diseases.

As long as these molecules are considered safe, they can be tested in human patients to slow the progression of pulmonary fibrosis; at the same time; These small molecules can also be used to treat other diseases, such as persistent lung damage caused by COVID-19.

In addition, researchers have also discovered a similar transitional epithelial cell population in COVID-19 lung injury patients receiving lung transplantation, which may also be targeted by ISRIB molecules like mice; later, such as ISRIB, etc. Drugs may promote the repair of lung tissue in patients with persistent lung scars after COVID-19 infection.

In summary, the results of this article reveal that integrated stress response (ISR) plays a dysfunctional role in the regeneration of alveolar epithelial tissue after body injury, which may be of great significance for the later development of new therapeutic methods.