Tulane University proposes multiple points on the origin of coronavirus. On May 12, 2021, Robert Garry of Tulane U in the United States uploaded an article on Virological.org, analyzing the viruses found on the surfaces of the two markets in Wuhan provided by the World Health Organization (WHO) report The sequence analysis denies the possibility of gain-of-function questioned by Rand Paul in Congress that many people have discussed; at the same time, it further denies the “Lab Leak Theory”.

The article pointed out that the latest WHO report published in Annex E2 (see the publication of the investigation report on the origin of the COVID-19 virus on page 120 of the WHO), among 168 COVID-19 cases confirmed in Wuhan before December 31, 2019, have exposure to the wildlife market History is only 55.4% (93/168).

Rambaut of the University of Edinburgh divided the early SARS-CoV-2 into two pedigrees, A and B.
Early lineage A viruses include the SARS-CoV-2 isolate EPI_ISL_529213 in the WHO report, which was obtained in other markets in Wuhan on December 30, 2019. It has the same nucleotide tags T8782 and C28144 as the bat coronavirus RaTG13; the ancestor of SARS-CoV-2 (MRCA) may have high genetic sequence homology with these early lineage A sequences.

Wuhan-Hu-1 (MN908947), which was discovered and isolated at the South China Seafood Market on December 30, is also the world’s first SARS-CoV-2 virus sequence and belongs to the B lineage.

The virus sequences of other Wuhan markets provided in the above-mentioned WHO latest report further improve the biological evidence of the molecular origin of SARS-CoV-2. These evidences show that: 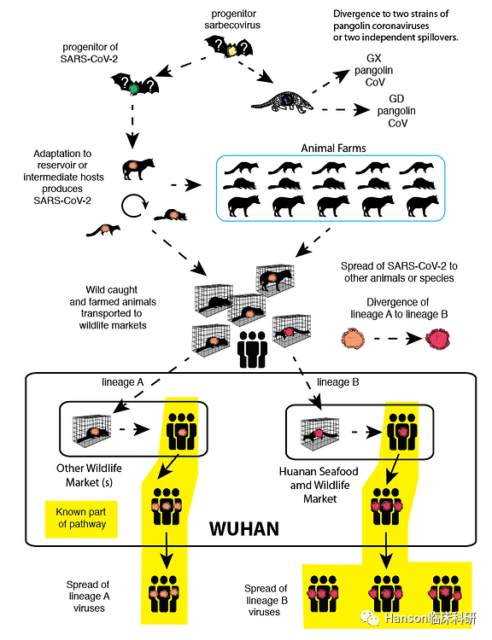 Robert Garry believes that the A and B lineages appear in different markets at the same time, which is a good rebuttal to Gain-of-Function and Lab Leak Theory, because the viruses obtained in the above situation are often clonal.

The different lineages of multiple markets spread simultaneously in the early stages of the epidemic, indicating that each wild animal market is likely to be an important intermediate host of animals that spread to people across species, and the differentiation of the A and B lineages may occur on wild animal farms or During the transportation of a large number of animals.