Over 100 antibody drugs approved by the FDA! Double antibody, ADC-Where is the new flashpoint?

Since the US FDA approved the first monoclonal antibody OKT3 (muromonab-CD3) in 1986, it has a history of 35 years.

Corresponding to the continuous increase in the number of approvals is the steadily increasing global antibody drug market. The market size in 2020 has exceeded 150 billion U.S. dollars.

The picture below shows the FDA approval of antibody drugs over the years. 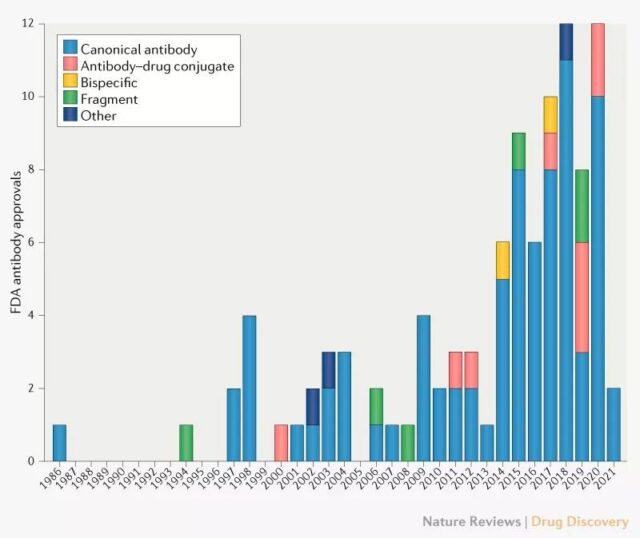 Figure 1 Antibody drugs approved by the US FDA each year

According to statistics, in the 2020 list of top 20 drug sales, antibody drugs occupy 8 seats, and the cumulative income of these 8 antibodies is 69.3 billion US dollars.

It is the monoclonal antibody drug with the greatest potential to surpass Humira and become the new generation of drug king.

Monoclonal antibodies have attracted much attention from drug developers because of their excellent specificity and affinity for cell surface target antigens.

And compared to the past that medicinal chemists may have to spend years searching for small molecules that are active on specific targets, the discovery of antibodies may only take a few months.

According to Reichert’s analysis of 569 antibodies that entered the clinic between 2005 and 2014, from phase I clinical to approval, the overall success rate was 22%, and the probability of antibody success in trials is twice that of small molecules.

Figure 2 The form of the antibody

Although the number of antibody drugs has exceeded 100, the targets covered are still very limited, and 10 targets account for 42% of the approved number.

At the top of the list are PD1/PDL1 immune checkpoint inhibitors, 7 drugs have been approved; and CD20 monoclonal antibodies have also been approved for 6 drugs. 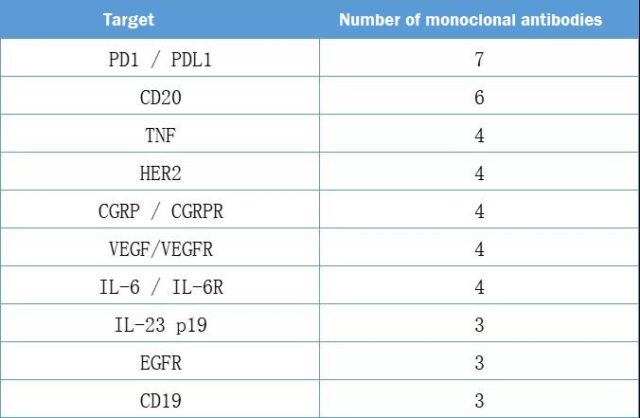 There are hundreds of antibodies in clinical development, but there is still a large concentration of popular targets.

The article points out that this trend is partly driven by Chinese companies developing antibodies for the Chinese market.

According to incomplete statistics from Yaozhi data, in 2020, CDE will accept a total of 208 antibody drug clinical trial applications (173 monoclonal antibodies, 27 dual antibodies, and 8 ADC drugs). 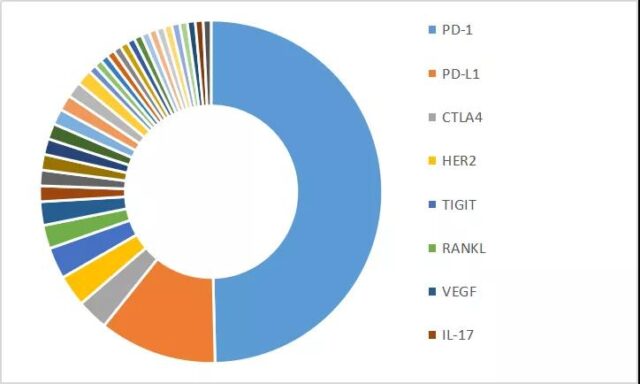 Distribution of antibody drug targets declared clinically in China in 2020

As can be seen from the above figure, the competition for target drugs such as PD1/PDL1, HER2, CTLA4 is still very fierce, but some newer targets, such as 4-1BB, LAG3, CD47, etc., have emerged.

In recent years, antibody technology has been continuously updated and iterated, and more and more other antibody drug forms have been derived from the initial monoclonal antibodies, such as ADCs, double antibodies, and so on.

Generally speaking, these mAbs can specifically recognize tumor-specific antigens, so they are known as “biological missiles.” The FDA approved the first ADC drug in 2000, namely Pfizer’s CD33-targeted gemtuzumab ozogamicin, for acute myeloid leukemia (AML). The FDA has approved 11 ADC drugs so far.

The bispecific antibody has also become a late-stage show in the antibody field. So far, the FDA has approved two dual-antibody drugs.

Antibody drug research and development may have just started, and the next 100 antibodies are estimated to take less time.

The article pointed out that although many therapeutic antibodies can block the interaction between receptors and ligands, agonist antibodies that mimic natural ligands to activate cell signaling are still out of reach.

In addition, drug developers are still getting involved in antibody-protein fusion biologics, and some antibodies fused with cytokines, receptor ligands, peptides, etc. may also open up new possibilities.

Over 100 antibody drugs approved by the FDA! Double antibody, ADC-Where is the new flashpoint?