Mammalian cells often become the main host for industrial biopharmaceutical production, mainly because of their ability to produce diverse, correctly folded and glycosylated proteins. The importance of post-translational modifications, especially glycosylation, and how they affect the different properties of recombinant proteins have attracted widespread attention in the past decade.

Extensive research has found that, for potential therapeutic applications, large and complex proteins need to have human-like post-translational modifications in order to be functional and non-immunologically inherited. Several studies by different research groups have shown that proper glycosylation characteristics can promote biological activity and stability, increase half-life, and reduce the pathogenicity of protein therapeutics.

However, 70% of biologics and almost all milliampere drugs are produced in Chinese hamster ovary (CHO) cells, as the most commonly used and preferred biopharmaceutical protein production host. Their popularity lies in their high productivity (0.1-1g/L for batch culture, 1-10g/L for batch culture), a continuous good growth phenotype, suitable for large-scale industrial cultivation, and easy adaptation to various This chemically defined medium is not susceptible to infection by human viruses, and can carry out human-compatible glycation.

The CHO ori cell line was isolated and immortalized by Theo-dore Puck in 1956. Then subclones are further developed by introducing mutations or by adapting to different culture conditions. Compared with the parental cell line, the CHO ori-derived cell line has specific properties that facilitate more efficient protein production or the establishment of producer cell lines.

Although they have a common ancestor, different CHO lines exhibit a large amount of genetic heterogeneity due to extensive mutagenesis and clonal selection. These genetic differences also affect nucleotide and epigenetic variations, illustrating the unique differences in host cells.

For decades, research groups around the world have invested tremendous efforts to try to improve the performance of the CHO cell line. Attempts to operate these cell lines are aimed at achieving higher productivity and product yields, and using existing mechanisms for transcription, translation, cell metabolism, signaling pathways, and secretion.

New focus areas for industrial cell line development Before 2010, many biopharmaceutical companies followed the policy of developing their own production cell lines, but this approach has changed in the past decade. Now, major companies tend to use the same host cell line for production and initial clinical trials, because they have realized that this strategy simplifies the cycle of cell line development and optimizes the path to the clinic. In addition, it can reduce the risk of product comparability issues and help manufacturers meet product quality requirements and consistency expectations.

These changing priorities have led to new directions regarding the innovation of the CHO expression platform. The focus of industrial cell line development has shifted to the stability of host cell lines to ensure long-term stable production, using targeted integration technology for expression optimization, especially for complex engineered recombinant therapies, and developing selection and screening systems for faster and Choose clones more efficiently (see figure below). 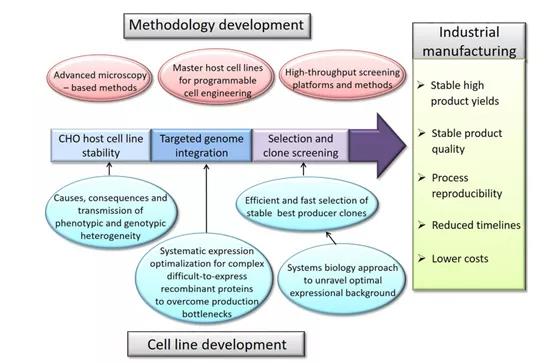 In the process of developing stable recombination cell lines, an important issue is to generate and identify high-yielding clones that will not lose their expression ability over time. Clonality is considered to be the key to therapeutic protein production, because the clonal line is believed to provide a stable and consistent product quality profile. Then the yield of the selected clones needs to be evaluated during the long-term cultivation process, which is a labor-intensive and time-consuming process. However, the rapidly accumulating transcriptome data of the CHO cell line opened the way for functional analysis to identify regulators and biomarkers of high yield and clonal stability.

In the generation of recombinant cell lines, the most intensive re-search line focuses on the use of targeted genome integration techniques for expression optimization. In order to establish a stable and clonal (homologous) producer cell line, the transgene needs to be integrated into the host genome. Traditional methods in this regard rely on random integration of expression vectors, and then time screening from a pool of recombinant cells with heterogeneous transgene insertion to find suitable cells. This method has two main disadvantages: low integration efficiency and the location effect of the integration point.

At present, a large number of engineered and complex recombinant proteins are filling the industrial production pipeline. Despite the use of advanced CHO cell expression platforms, a major area of ​​innovation in the pharmaceutical industry has focused on improving the manufacturability of these biological products. Recently, different research groups have made many attempts to understand the causes of production bottlenecks and seek solutions for these problems.

The latest advances in the development of high-throughput selection and screening systems. The selection system has been standardized more than ten years ago, but the advantages and disadvantages of different selection systems are different. Some studies have shown that gene amplification caused by MTX selection is a major cause of unstable production of recombinant cell lines. In addition, multiple rounds of MTX selection require longer time to generate cell lines.

With the increasing market demand for biotherapeutic products, time and cost are becoming important factors related to the production process. In the process of process design and optimization, people pay more attention to how to reduce the time and cost of recombinant cell lines to produce new biological products. This has promoted the development of new methods and technologies for high-throughput clone screening and characterization.

Much of the improvement work is focused on monoclonal, because this is the most time-consuming process in the establishment of producer cell lines. Several new technologies are now available for more effective single cell separation, replacing the classic “limiting dilution method”. Modern cloning methods use specialized equipment to ensure that individual cells are seeded into the wells of the microplate. Fluorescence activated cell sorting (FACS) has been successively used to sort single cells with specific cell attributes, indicating that it has high affinity.

The VIPS (Verified In Situ Plate Seeding) developed by Solentim and the Cytena single cell printer instrument combine cell seeding with microscope imaging to ensure the deposition of single cells, thereby ensuring the source of single cells for derived clones. Berkeley Lighting’s Beacon platform uses nanofluidics and photoelectric positioning technology, through software-controlled operations, that can culture, manipulate, and identify thousands of cells in parallel on a single chip.

However, a major problem is that these modern technologies require special instruments, materials, and advanced information technology facilities, so they are still too complex and expensive to be routinely used in industrial manufacturing.

On the other hand, so far, the data provided by different “holographic technologies” cannot be integrated into a general mathematical model, which will facilitate the transfer and application of this information in the design of the experimental process. How to adjust and integrate this knowledge into the optimization and development of industrial biological processes.