Vietnam is encountering the big problem: COVID-19 cases soared.  A country is in big trouble!  Not India, nor Japan, but Vietnam.

Like China, Vietnam’s measures are well in place, and there have been few cases. Therefore, in 2020, Vietnam’s GDP will still grow by 2.9%. Don’t underestimate this 2.9%, which is higher than China. Looking at the entire Southeast Asia, Vietnam is also the only country with positive economic growth.

Vietnam, to a certain extent, is repeating China’s miracle. The size of its nearly 100 million population has really made the world look at it.

But this optimism has now encountered a major test. Since the end of April this year, the epidemic is raging in Vietnam.

A large number of local cases have occurred in the capital Hanoi, Ho Chi Minh City in the south, Da Nang City in the central part, and major cities in Vietnam. In the northern province of Bac Giang, a company with 4,800 employees reportedly found that about one-fifth of the workers were diagnosed.

Why is the number of confirmed cases in Vietnam rising so fast?

Looking at the curve, it has been almost straight up in the past month or so. 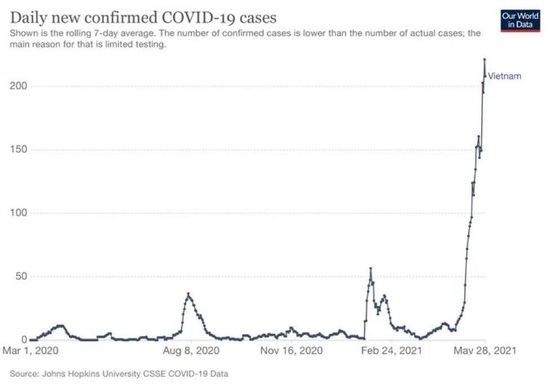 The analysis of Vietnamese officials is even more breathtaking.

According to the latest statement by Vietnam’s Minister of Health, Nguyen Thanh Long, Vietnam has detected a variant of the new coronavirus, which seems to be a mixture of mutations found in India and the United Kingdom. The latest mutation is very dangerous.

The emergence of this new variant has increased the number of virus variants in Vietnam to eight.

Ruan Qinglong also emphasized, “The main feature of this new variant is that it can spread very quickly in the air. After entering the human body, its concentration in the throat and saliva of the infected person will rapidly soar and quickly spread to the surrounding area. .”

In addition, the symptoms of patients suffering from this variant are showing signs of deterioration, which may be one of the reasons for the recent outbreak in Vietnam.

3. It can spread quickly in the air.

This is really scary.  It’s no wonder that the original top students have now the red light on the exam. 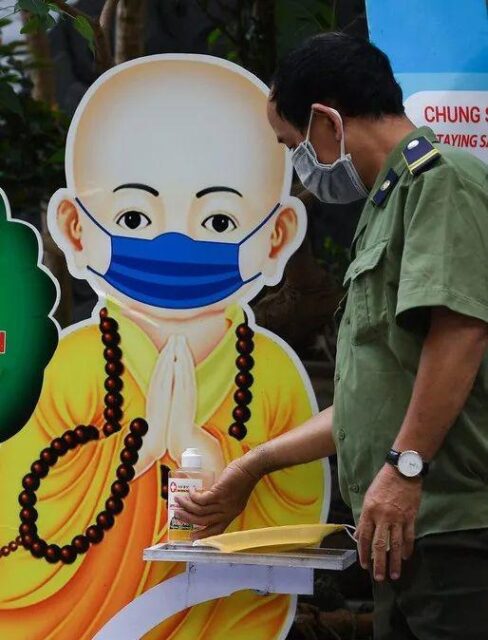 Other Southeast Asian countries may have similar situation

According to data released by the Ministry of Health of Malaysia on the 29th, in the past 24 hours, Malaysia has newly diagnosed 9020 cases. This is the first time that Malaysia has confirmed more than 9,000 cases in a single day. You know, Malaysia has a total population of more than 30 million, which is less than one-third of our Guangdong Province, but there are more than 9,000 new cases in one day.

Malaysia has no choice but to announce a nationwide blockade and suspension of economic and social activities from June 1.

There have been clusters of infections in many places in Thailand. In a day on the 29th, nearly 5,000 new cases were diagnosed. In the overcrowded Thai prisons, a total of more than 20,000 cases have been diagnosed.

Thailand has nothing to do. It is considering an amnesty, but if a large number of cases go home, will the spread be aggravated? This is a new question.

In the economic center of Ho Chi Minh City, the government has announced that starting from May 31, a 15-day social distancing will be implemented. In addition, it was originally forbidden for gatherings of more than 10 people in all public places, but now we are considering reducing the number to 5 people.

More cities in Vietname are about to be locked down again.