Through in vitro experiments and animal models, it has been found that glioblastoma stem cells (GSC) are epigenetic for immunoediting (rather than subclonal selection) to promote the recruitment of myeloid cells and form tumors rich in myeloid cells Microenvironment to achieve immune evasion and tumor progression.

Glioblastoma (GBM) has high intra-tumor and inter-tumor heterogeneity, including genome, transcriptome, and epigenetic levels. The interaction between GBM and tumor immune microenvironment also plays an important role in tumorigenesis and development. The mechanism by which GBM promotes tumor immune microenvironment is unclear. In this paper, through continuous transplantation of transformed cells with syngeneic and immunocompetent hosts, a high-quality and immunologically active mouse model is constructed to monitor and explore the transcriptome and epigenetic changes that occur when GBM cells acquire immune evasion ability, and to explore mesenchymal GBM immunity The origin and mechanism of escape phenotype.

2. Stable reorganization of the transcriptome of GSC cells after immune attack

4. The acquired transcriptome changes are consistent with the results of epigenetic immunoediting

The researchers introduced one of five identified GBM driver mutations (EGFRvⅢ overexpression, PDGFRA overexpression, gene knockout NF1, PTEN, TP53) into BL6 mouse neural stem cells (Figure 1A). These “single-strike” GBM stem cells can express neural stem cell markers (NESTIN and SOX2) and retain the ability to differentiate into neurons and astrocytes. Next, the researchers combined the above mutations to simulate GBM. The researchers co-knocked out NF1 and PTEN and overexpressed EGFRvIII to form a triple-mutated NPE cell line (Figure 1B-C). In the mice, aggressive tumor growth and infiltration (Figure 1D) and typical GBM were observed. Features (Figure 1E-H), which can be used to simulate the interaction between tumor cells and TME. Tumors generated in parallel in immunodeficient NSG mice were used as a control (Figure 1I). NPE tumors can induce immune responses in BL16 mice. The growth rate in BL6 mice is slower than that in NSG mice (Figure 1J), and most BL6 hosts can survive for a long time without detecting tumors (Figure 1G). ). These data indicate that the host immune system of BL6 mice responds to NPE cells and restricts tumor growth. 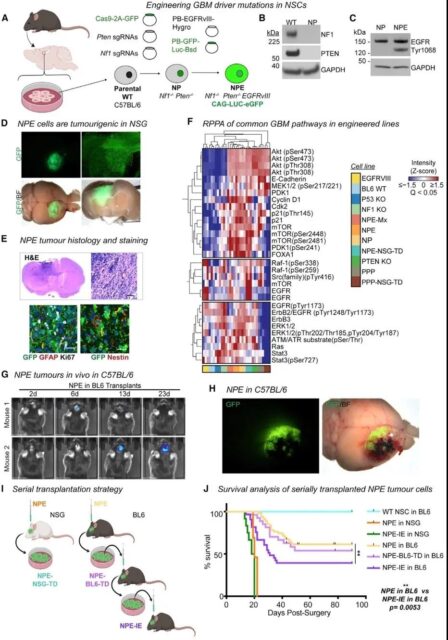 As a result, the primary culture after continuous transplantation of tumor cells can be used to enrich cells that have acquired immune escape ability. After the researchers performed three consecutive rounds of BL6 mouse transplantation and primary tumor culture, NPE-IE cells showed stronger tumor-forming ability (Figure 1I), and the survival time of mice was significantly shortened (Figure 1J), indicating NPE-IE Cells have acquired the ability to escape immunity. This is also in line with the concept of immune editing, that is, the host’s continuous immune attack leads to the emergence of cells with stronger immune escape capabilities.

2. NPE-IE tumors with immune escape have a highly immunosuppressive microenvironment

After inhibiting CD8+ T cells in BL6 mice, tumors with or without immunophenotype showed stronger aggressiveness and shorter survival time, indicating that immune escape may not be mediated by cytotoxic T cells . In addition, the authors found that the total number of CD4+ and CD8+ T cells, M1 and M2 type macrophages in the brain tissue of the glioma model mice increased significantly, and the macrophages were mainly distributed in the tumor. Neighboring brain tissue is less distributed. At the same time, the number of microglia decreased significantly. (figure 2) 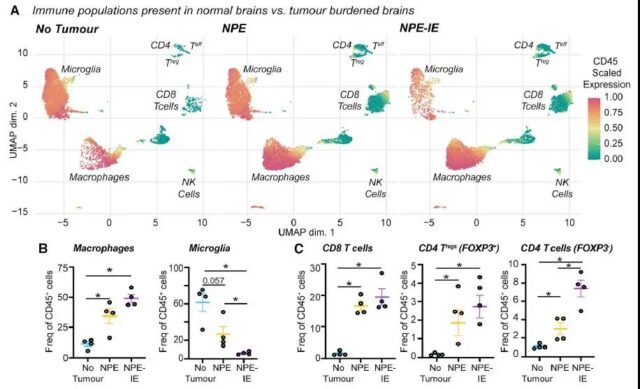 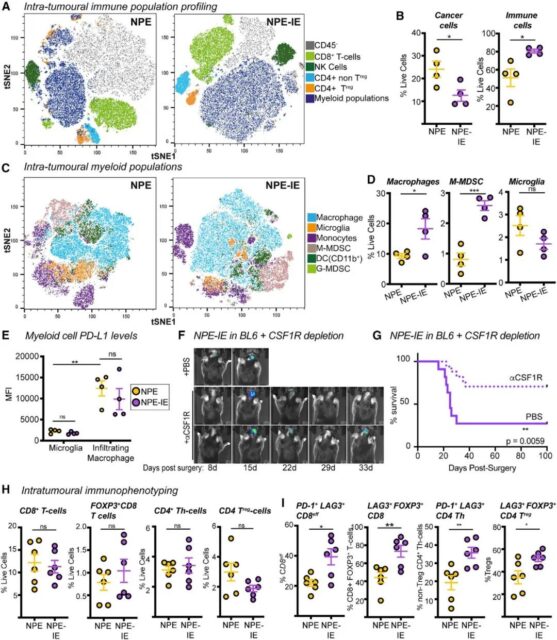 In order to explore whether the increased macrophages in NPE-IE tumors can promote the immune escape of gliomas, the authors used specific antibodies to block the macrophage colony stimulating factor 1 receptor (CSF-1R) in BL6 mice. Clear tumor infiltrating macrophages. This operation prolonged the survival time of mice, and even eliminated NPE-IE tumors in vivo (Figure 3F-G). But it is not effective for NSG mice with incomplete immune function. Therefore, the authors infer that these tumor-infiltrating macrophages play an important role in NPE-IE tumor growth and immune escape. Although there is no significant difference in the frequency of different T cell subgroups in NPE-IE tumors, it is indeed found that there are more PD-L1+LAG3 double-positive CD4 and CD8 cells in NPE-IE tumors (Figure 3H-I). This indicates that NPE-IE tumors have more obvious T cell dysfunction and stronger immunosuppression.

In order to reveal the internal mechanism of the acquired immune escape of NPE-IE cells, the researchers compared NPE cells and NPE-IE cells with wild-type NSCs. However, through karyotyping and whole-genome sequencing, whether it is ploidy, structure or point There was no obvious abnormality in the mutations (Figure 4A), indicating that the acquired immune escape of NPE-IE tumors did not originate from clonal evolution or the classical genetic immune editing process. 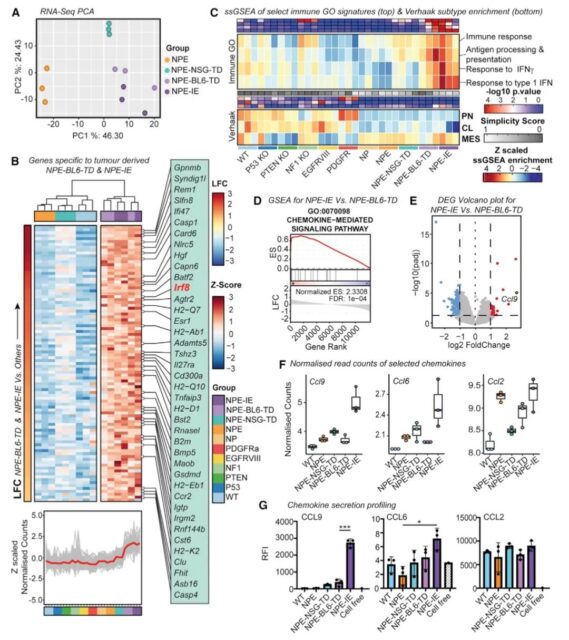 Further transcriptome analysis found that the transcriptome characteristics of the single mutant line with Nf1 deletion and the NPE mutant were very similar. In addition, the deletion of Nf1 is associated with the enrichment of several GBM-related gene markers, angiogenesis, and the significant activation of cell migration pathways. Combined with the observation of enhanced angiogenesis in mesenchymal subtypes of tumors, this suggests that Nf1 may be missing. It is the “primitive” action of malignant transformation.

The researchers also found that the high expression of transcription factors Ccl9 and Irf8 may be related to “training” immune escape (Figure 4B, 4F). Previous studies have known that Ccl9 is related to the establishment of a tumorigenic microenvironment, which can explain the increase of myeloid cells in NPE-IE tumors; the up-regulation of Irf8 expression is surprising, because it is usually only used as a myeloid-specific transcription factor in hematopoiesis It is expressed in cells and participates in the differentiation of myeloid cells and macrophages. All in all, the researchers found that the body’s immune attack on NPE can trigger obvious transcriptional changes in tumors.

In view of the fact that the transcriptional changes caused by the immune attack in the body are stably retained after amplification in vitro, the researchers concluded that it may be an epigenetic modification. Therefore, the genome-wide DNA methylation pattern was analyzed and found that tumor cells were extensively and significantly hypomethylated (Figure 5B-C). 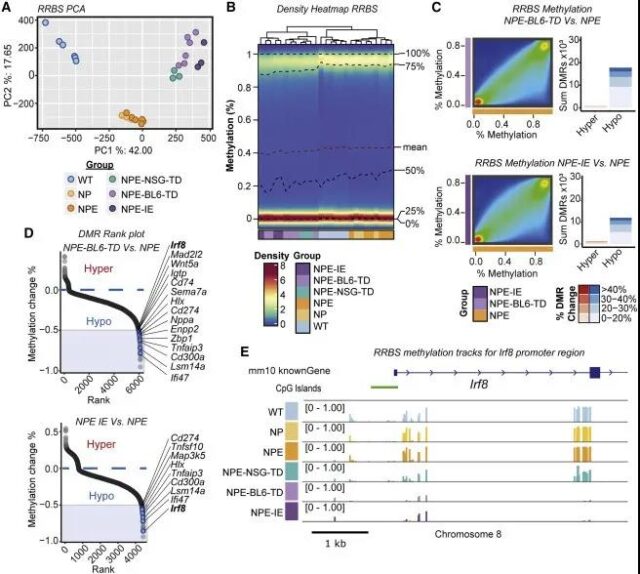 Consistent with the mRNA-seq data, the researchers found that the demethylation of many genes in tumor cells is associated with immune escape (Figure 5D). The most significant differential methylation occurred in the promoter and coding region of Irf8, and its hypomethylation was consistent with increased transcriptional activity (Figure 5D-E). Another interesting phenomenon is that the researchers found that the hypomethylation of well-known immune escape regulators such as Nt5e (CD73) and Cd274 (PDL1) is related to the activation of these genes in the body. The Nt5e gene, which activates transcription in NPE cells, has recently been identified as a key target of GBM immunotherapy, and it is elevated in TAMs.

Changes in DNA methylation patterns in tumor cells indicate epigenetic immune editing. In this process, the transcriptional changes caused by immune attack are stably expressed, selected by some cells, and daughter cells with high immune escape ability are produced. .

6. Irf8 responds to IFNγ and TAM signals and plays an important role in immune escape

It is well known that macrophages can induce Irf8 expression through the STAT1 signaling pathway induced by interferon gamma (IFN gamma). Researchers in vitro experiments found that chronic IFNγ signals from immune TME may stimulate Irf8 expression activation in NPE cells (Figure 6B-C), and this activation is consistent with the DNA demethylation status at Irf8 sites. JAK/STAT inhibitor tofacitinib failed to reverse the expression of IRF8 in NPE-IE, indicating that in NPE-IE cells, a mechanism that does not depend on JAK/STAT is maintaining high expression of IRF8 (Figure 6D). 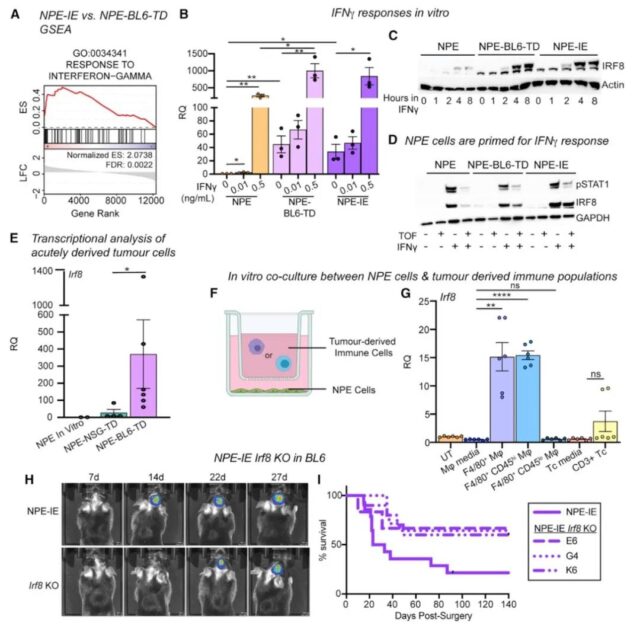 Figure 6. Irf8 responds to IFNγ and TAM signals in vitro and plays an important role in immune escape

Further experiments on the NPE-IE Irf8 knockout cell line also proved that the activation of Irf8 is an important factor in the immune escape of NPE-IE cells, and it may occur through IFNγ-mediated activation in vivo (Figure 6H-I). 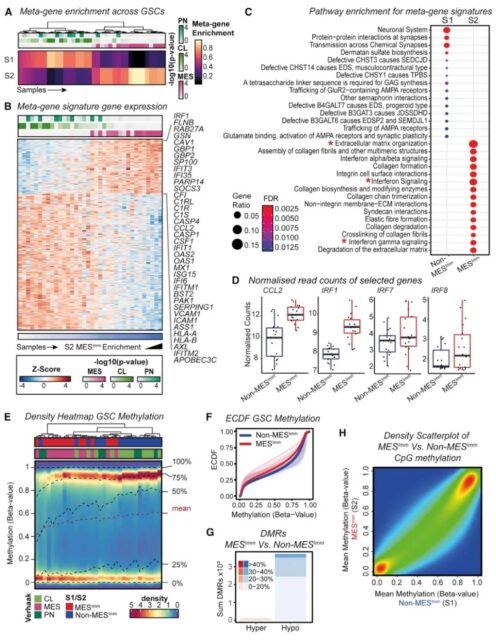 Figure 7. Human GSC is divided into two main transcription subtypes, one of which is defined by IFN and hypomethylation, which is similar to mesenchymal GSC

MESImm subtype GCS showed up-regulation of multiple interferon regulatory factor (IRF) family members, especially IRF1 (Figure 7D). CCL2 is also significantly up-regulated, and its expression is related to the increase of immune cell infiltration in interstitial GBM. In addition, with the enhancement of immune evasion ability, the expression of MESImm subtype-related genes was up-regulated (Figure S6C). Using the single-cell RNA sequencing (scRNA-seq) data published by Neftel et al. (2019), we found that it can also be divided into MESImm subtypes and Non-MESImm subtypes, and MESImm subtypes are similar to previously published mesenchymal tumors Transcriptome consistency is high.

In summary, the researchers revealed that the mesenchymal GSC has stable epigenetic changes, that is, the demethylation of genes related to the IFN signaling pathway such as CCL2, IRF1, IRF8, so as to recruit and mimic myeloid cells to form immunosuppression. Microenvironment.

The specific combination of heredity, epigenetics, and tumor microenvironment endows GBM tumors with a high degree of internal heterogeneity, with different transcriptional states, but it is still poorly understood. In this article, the researchers proved that a key component of the “mesenchymal” tumor subtype is that GBM cells acquire new transcriptome changes after immune attack, which plays an important role in promoting immune escape.

In this article, the researchers used in vitro and animal models and found that GSC undergoes an immune attack after epigenetic modification, changes in DNA methylation patterns, reconfiguration of transcription factor expression profiles, and changes in transcription circuits, leading to enrichment of myeloid cells and tumor microenvironment Increased immunosuppression. Similar changes in transcription and DNA methylation can also be observed in GBM cells of mesenchymal subtypes, indicating that this epigenetic immunoediting process may occur in actual clinical patients.

Researchers believe that in response to immune attacks, Nf1 deletion is a key mutation that activates NPE cells and promotes acquired transcription and epigenetic changes. Nf1 mutation can overcome the sensitivity of “wild-type” GSC to IFNγ, which indicates that it has taken a crucial step in resistance to subsequent transcriptional changes caused by immune attack and related epigenetic remodeling.

IFNγ is an important signal that triggers transcription recombination. Researchers found that IFNγ can cause similar transcriptional changes in NPE cells in vitro, and many genes enriched in NPE-IE cells are downstream effectors of this signaling pathway. In addition, the data in this paper indicate that the recruited TAM may be the source of the continuous IFNγ signal. Therefore, IFNγ may be the main inducer for NPE-IE cells to acquire immune escape characteristics.

All in all, this article reveals that after immune attack, GBM cells can improve the immunosuppression of TME and promote the immune escape of tumor cells through epigenetic recombination and the expression of myeloid-specific transcription factors. This provides new ideas for the follow-up monitoring of GBM cell immune escape and immunotherapy strategies in immunotherapy. It is also of great significance to further analyze whether the epigenetic immunoediting process found in GBM is also applicable to other brain tumors or cancers.