KRAS G12C’s first targeted drug Lumakras has been approved by FDA!  On May 29, 2021, the U.S. Food and Drug Administration (FDA) accelerated the approval of the anti-cancer drug Lumakras (Sotorasib, AMG510) for the treatment of non-small cell lung cancer (NSCLC) patients with KRAS G12C mutations, these patients at least Received a systemic treatment.

This is the world’s first targeted drug for KRAS, with milestone significance.

KRAS gene mutations have long been regarded as “undruggable” targets. The approval of Lumakras marks the beginning of a new field, breaking through the history of KRAS “undruggable” and will usher in countless cancer patients with KRAS mutations. New hope for survival! 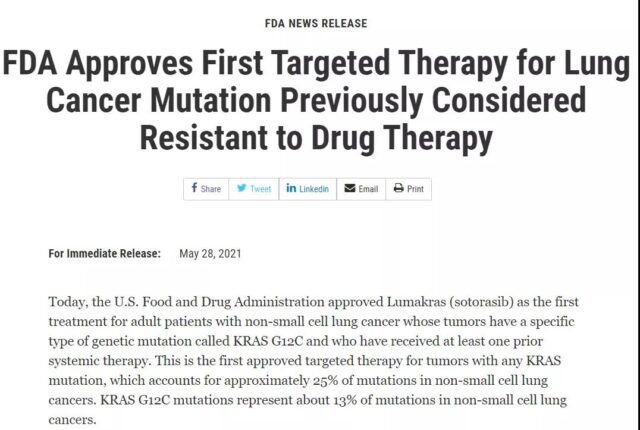 NSCLC patients contain proto-oncogene mutations, of which KRAS is the most common mutated gene, and KRAS mutations account for about 25% of non-small cell lung cancer mutations. KRAS G12C is a specific KRAS submutation. It is the substitution of cysteine ​​for glycine in the 12th codon, which may lead to multiple targets including gefitinib, erlotinib, crizotinib, etc. To drug resistance. KRAS G12C accounts for about 44% of all KRAS mutations, and it is the most common in NSCLC, accounting for about 13%. That is to say, one in every 8 NSCLC patients has a KRAS G12C mutation. Followed by colorectal adenocarcinoma accounted for 3-4%, pancreatic cancer accounted for 2%, and more than 100,000 people worldwide are diagnosed with KRAS G12C mutations each year.

Lumakras is a covalent inhibitor that specifically targets KRAS G12C mutants. It locks KRAS in an inactive state by binding to KRAS G12C mutants, thereby irreversibly inhibiting the activity of KRAS. This FDA approval is based on data from the CodeBreaK 100 clinical trial. Among 124 patients with locally advanced or metastatic KRAS G12C mutation NSCLC who were treated with immune checkpoint inhibitors and/or platinum-based chemotherapy, Researchers evaluated the efficacy of Lumakras.

Medical staff should monitor the patient’s liver function tests before and while taking Lumakras. If the patient develops liver damage, the drug should be discontinued, the dose should be reduced, or Lumakras should be permanently discontinued. When taking Lumakras, patients should avoid taking acid reducers, drugs that induce or act as substrates for certain enzymes in the liver, and drugs that act as substrates for P-glycoprotein.

More patients will adopt personalized treatment in the future

The launch of Lumakras will indeed bring hope for survival to countless NSCLC patients with KRAS G12C mutations! Previously, on January 21, 2021, Lumakras (AMG510) has been included in the NMPA as a “planned breakthrough therapy drug variety”. It is believed that such lung cancer patients in some countries will also benefit greatly in the near future.

“Today’s approval represents another major advancement in individualized therapy, and more patients will adopt personalized treatment methods in the future.” Richard Pazdur, director of the FDA Center for Excellence on Oncology and Acting Director, Office of Oncology and Diseases, Center for Drug Evaluation and Research of the United States The doctor said.