What is Self-assembled mRNA vaccine?

What is Self-assembled mRNA vaccine?  Self-assembly is an important concept in materials science, and it is widely explored in the design and development of nanomaterials.

The term “self-assembly” refers to the spontaneous arrangement of individual molecules into a supramolecular assembly driven by non-covalent interactions.

This method is very attractive in the development of “smart” materials, because the properties of individual components can be fine-tuned, and they can be prepared by simply mixing the components.

At present, most non-viral vectors used for mRNA delivery are prepared by self-assembly, including a large part of mRNA vaccines. Scientists from Oregon, USA published an article “Self-assembled mRNA vaccines” earlier this year, highlighting recent progress in designing mRNA vaccines and implementing self-assembly in their pretreatment.

This interdisciplinary re-understanding can provide guidance for researchers seeking to answer basic questions in the field of mRNA vaccines.

The author believes that the first important advantage of mRNA vaccines is the safety status. Compared with live attenuated vaccines and inactivated vaccines, mRNA vaccines eliminate any concerns related to endotoxin and infection. Unlike DNA vaccines and viral vector-based vaccines, mRNA vaccines do not have the risk of genome integration and insertional mutagenesis, because their activity does not need to enter the nucleus. The transient nature of mRNA activity is beneficial to avoid the constant expression of the corresponding protein, thereby producing better temporal control of its activity.

The third advantage of mRNA vaccines lies in their production. The synthesis of clinical grade mRNA is based on a standardized in vitro transcription (IVT) process. This manufacturing process uses DNA templates and various enzymes in a cell-free system. Compared with the production of culture-based DNA or protein vaccines, this process is relatively stable and scalable.

Here we mainly understand the mechanism of action of mRNA vaccines.

(1) Transfection of somatic cells, such as muscle cells and epithelial cells;

(2) Transfection of resident immune cells at the injection site;

(3) Transfection of immune cells of secondary lymphoid tissues, including lymph nodes (LN) and spleen (See below).

Through maternal routes, such as intradermal, intramuscular, and subcutaneous mRNA vaccines, non-immune cells near the injection site can be transfected. The conversion of non-immune cells leads to the production of antigens, which are subsequently degraded in proteases.

After degradation, the epitope from the antigen can form a complex with the major histocompatibility complex (MHC) class I, which is used to present the antigen to CD8-expressing cytotoxic T cells, leading to the establishment of cellular immunity to the antigen.

As we all know, transfected muscle cells can also activate bone marrow-derived DCs, and then induce CD8+ T cells.  Although the exact mechanism is unclear, some people believe that the antigen is transferred from muscle cells to DCs. 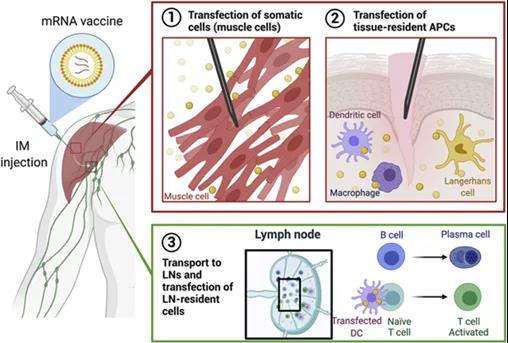 The figure above shows: The mode of action of the mRNA vaccine injected intramuscularly. (1) Muscle cells and (2) tissues near the injection site reside in APC. 3) The mRNA vaccine can flow into the proximal lymph nodes (LNs) and transfect the LN resident cells, thereby activating the development of T and B cells. 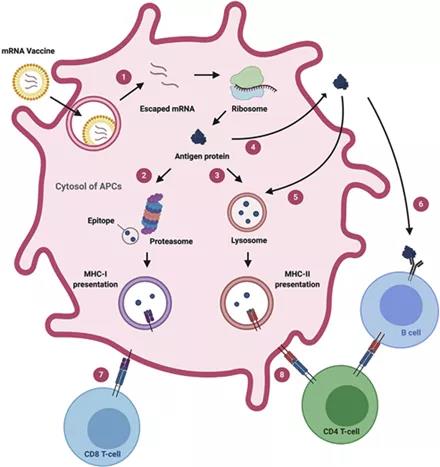 The above figure is the mechanism of the adaptive immune response induced by the mRNA vaccine. (1) After endocytosis-mediated internalization, the endosome of mRNA escapes to the cell membrane. (2) The antigen protein translated from foreign mRNA is degraded into fragments in the proteasome, and then presented by MHC-I. 3) Antigen protein can undergo lysosomal degradation through various mechanisms, such as autophagy and signal peptide, and then be presented by MHC-II. 4) Antigen protein can be destined to be expressed outside the cell in the form of secretion or membrane fixation. (5) Antigens expressed outside the cell can be absorbed again by APCs and directed to lysosome degradation. (6) On the contrary, extracellular antigens can be recognized by B cell receptors on B cells, leading to B cell maturation. 7) MHC-I presents epitopes to CD8+ T cells, while (8) MHC-II presents epitopes to CD4+ T cells.

Antibody response is an important mechanism for vaccines to neutralize foreign antigens. In the case of mRNA vaccines, proper activation of B cells is still crucial for inducing and maintaining antibody production. B cell activation is initiated by encountering a complete antigen and B cell receptor (BCR) in the extracellular space (above). Since naïve B cells live in LNs, the activation of B cells requires the delivery of antigens to LNs for contact. Soluble antigens reach the draining LNs from the periphery; however, small proteins (less than 10 nanometers in size) tend to enter the capillaries because the blood flow velocity is 100-500 times higher than the lymph flow velocity, which limits the availability of antigens in LNs. APCs such as monocytes and migrating DCs bring antigens to LNs and provide them to Naïve B cells; however, its efficiency is very low compared to directly supplying antigens to LNs.

What materials are used to deliver mRNA?

(1) protect nucleic acid from the influence of nuclease;

(2) control the release of nucleic acid;

(3) selectivity of cells and tissues;

Although a lot of work has been done in the design of gene delivery vectors, the independent influence of the characteristics of the building blocks on effective cell uptake is still largely unclear. So far, self-assembled nanostructures loaded with mRNA have produced higher delivery efficiency than naked mRNA vaccination, and allow more routes of administration, expanding the therapeutic potential of mRNA nanomedicine. Here, the authors will focus on lipid-based materials because they have great opportunities in clinical development, and polymer-based materials because of their recent success in delivering mRNA to the lungs, which is an important but Hard-to-reach goals. For readers interested in a more detailed discussion of polymers, peptides, and hybrid materials, the author suggests that they can focus on seminal and recent comments on this issue.

The self-assembly of LNPs is driven by the continuous competition between kinetics and thermodynamics, making it a highly fluid and dynamic system. Historically, the preparation of lipid vesicles is usually achieved by rehydrating lipid films and subsequent extrusion to achieve uniform size distribution; in this case, the formation of lipid vesicles may be driven by thermodynamics , Because the solubility of lipids in aqueous media is very poor. Therefore, these lipid vesicles have a poor encapsulation effect on nucleic acid cargo. Today, LNPs are prepared by rapid mixing, usually driven by microfluidic devices.

LNPs can be said to be the most complicated way of mRNA delivery so far, and they are highly variable in structure and the number of constituent lipids. The current clinical standard for LNPs (for siRNA delivery)-the first clinical LNPs. An approved formula containing DLin-MC3-DMA, DSPC, cholesterol and DMG-PEG-2000-composed of nearly 60,000 lipid molecules per capsule (Figure A below).

The positive charge allows these lipids to form an ionic interaction with the negatively charged mRNA to form a lipid complex, usually called a lipid complex [170]. Examples of cationic lipids include DOTMA, DOTAP and DOGS (Figure B below).

Replacing the oleoyl tail of DODMA with linoleyl tail leads to DLinDMA, which has caused extensive and effective protective immunity against respiratory syncytial virus (RSV) in the body. The systematic study of the structure of DLinDMA led to the determination of DLin-KC2-DMA. After further optimization, DLin-MC3-DMA was discovered, which is the key component of the first siRNA drug Onpattro® (Figure C below). Therefore, MC3 proved to be effective in delivering mRNA. The plasma half-life of MC3 is very long, 72 hours, which limits its chronic administration. Therefore, the next generation of lipids uses biodegradable functional groups to promote removal. One way to increase biodegradability is to add esters. The ester pattern is easy to combine, has stable chemical properties, and is biodegradable, and its biodegradation dynamics can be effectively controlled. Some examples of ester-based biodegradable lipids include L319, YSK12-C4, CL4H6 and Moderna’s proprietary lipid series, as well as Acuitas’s proprietary lipid series (Figure D below). Compared with MC3, these biodegradable ester-based ILs are generally considered to be more effective in gene delivery. For example, compared with MC3, L319 showed better gene silencing in mice. 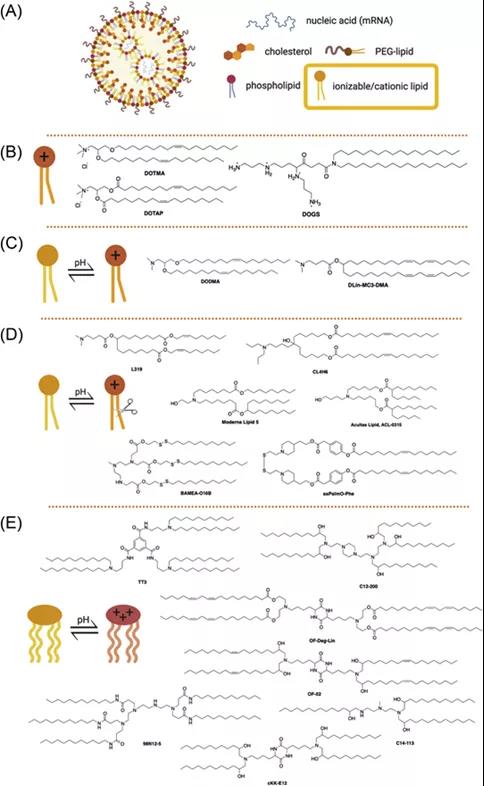 Affect the physical and chemical properties of mRNA vaccine delivery.

The nanoscale and molecular structure of all potential gene carriers determine their efficiency. So far, the exact structural pattern of building blocks and self-assembly required to design an excellent mRNA-based gene delivery vector is still unclear. However, there are some delivery system guidelines that are consistent regardless of the goods and packaging materials. Here, the authors try to summarize information related to gene delivery vector design and discuss examples of mRNA vaccines when applicable. E.g,

According to the definition of vaccinology, subunit vaccines with a size of 10 nanometers are difficult to reach LN because they are washed away by the blood stream instead of being carried by the lymph stream. On the contrary, due to the weakening of diffusion and convection, vaccines that are too large (>200 nanometers) are difficult to enter the fluid flow across the interstitium.

Charge plays a key role in the biodistribution and efficacy of mRNA vaccines, because the inherently dense negative charge of mRNA poses additional challenges to packaging and delivery. Negatively charged carbohydrate barriers-such as glycocalyx and mucus interstitium, mucins on the surface of mucus and serous membranes-affect the trafficking of nanocarriers in the body environment. These barriers form an anionic gel-like matrix composed of glycolipids, proteoglycans, oligosaccharides and glycoproteins.

Both the shape and internal structure may affect the hardness of the delivery carrier surface and change the nature of the interaction with cells and endosomal membranes.

So, what is the clinical utility of the COVID-19 mRNA vaccine that we often talk about now?

Researchers from Pfizer and BioNTech jointly developed mRNA candidate vaccines BNT162b1 (NCT04368728) and BNT162b2 (NCT04368728). BNT162b1 mRNA encodes a trimeric RBD of SARS-CoV-2 spike protein, which is fixed together by T4 fibrin domains to enhance immunogenicity. On the other hand, BNT162b2 mRNA encodes a stable spike protein before fusion, with two key original thread replacements (see Figure B below). Both of these candidate drugs are formulated with LNPs and modified with 1-methyl-3′-pseudouridine instead of uridine.

mRNA-1273 encodes a pre-fused stable SARS-CoV-2 spike protein with two key proline substitutions, similar to BNT162b2. mRNA-1273 is well tolerated, with dose-dependent and short-term side effects (pain, fever, fatigue, chills, headache, and myalgia). These symptoms are more common after boosting doses. Among the participants who received 25 micrograms and 100 micrograms of mRNA-1273, the levels of binding antibodies and neuralization titers were lower than convalescent serum, 15 days after the first dose. However, after the booster dose, the level of bound antibody and the neutralizing titer became similar to or higher than that of the albino serum, clearly demonstrating the benefits of the primary booster.

LNPs currently require strict storage conditions, limiting their sales in places where cold storage is scarce or unavailable. In the near future, freeze-drying or other drug treatment methods may help solve this problem, and even achieve nasal, oral, or respiratory administration.

In contrast, the synthesis of a polymer is usually a step and requires one or several monomers; however, polymer products have inherent differences in molecular weight and the arrangement of monomers in the chain, which increases batch-to-batch The difference.

Therefore, although polymer-based systems are lagging behind LNPs, these technologies must not be compromised, especially for extrahepatic or local delivery. More importantly, polymeric materials may be another solution to the challenges of mRNA vaccine distribution.

Finally, mRNA self-assembly and packaging materials may require extensive optimization, depending on the payload.