2020 Global New Drugs R&D Review.  The report was independently conducted by the IQVIA Institute of Human Data Science, assessed the current status of drug development at the end of 2020, and analyzed the number of clinical trials that have been initiated, including the impact of the COVID-19 pandemic.

Although clinical trial activities have been significantly disrupted during 2020 due to the COVID-19 pandemic, the level of activity is still at a historic high (especially in the field of oncology). In general, clinical trials have increased by 8% starting in 2020, which is similar to the growth in the previous three years, including a rapid return to pre-COVID-19 levels from the middle of the year.

Remote, virtual or decentralized trials will increase significantly in 2020, especially those related to COVID-19, and promote the development and authorization of vaccines and related drugs.

Oncology trials started in 2020 reached the highest level in history, an increase of 60% over 2015, reflecting the strong momentum in this field, especially in rare oncology indications, which currently account for 63% of the total number of oncology trials.

Trials in other therapeutic areas (excluding infectious diseases) have declined in 2020, below the level of 2019, reflecting the changing priorities of sponsors and researchers, but in most areas (except the respiratory system), the There has been an increase in the past ten years.

From the beginning of clinical trials to the approval of emergency use authorization, the development and approval time of the COVID-19 vaccine averaged 7 months, while the average development time of all vaccines approved in the previous 5 years was 9 years and 4 months. 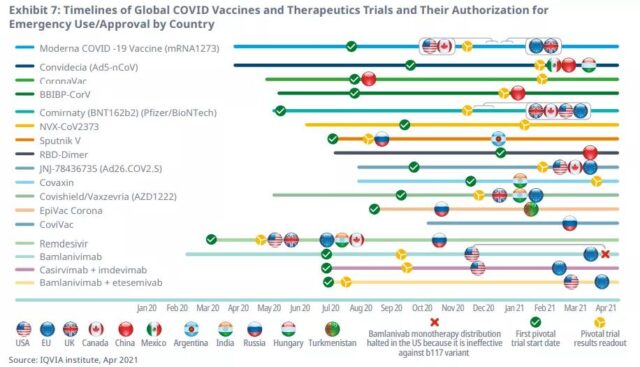 Due to the increase in the duration of trials, the increase in complexity of disease targets and related trial design, and the decline in success rate, the efficiency of clinical development (output relative to the input level) is still at a historically low level. However, efficiency has improved in 2020, which may be related to COVID-19, as complexity indicators (including the number of sites and countries included in the trial) have significantly decreased. The overall success rate of all treatment areas rose slightly to 9.8% in 2020, higher than in 2019, but still lower than the 10-year average of 12.9%.

There are big differences between different diseases, with success rates ranging from 32% for rare diseases to less than 10% for vaccines, endocrine, neurology, and cardiovascular diseases. Rare disease and tumor trials often take longer to complete than other diseases, and the selection criteria and endpoints are more complicated.

In the later pipeline, the number of products increased by 3%, bringing the total expansion rate of the pipeline since 2015 to 43%. Tumor drugs have reached a record high with a market share of more than 40% in the early stage and more than 30% in the late pipeline.

Half of the late-stage oncology pipeline is rare cancers, including a wide range of next-generation and targeted therapies.

The development of next-generation biological therapies has almost doubled in the first two years, and has stagnated in 2020, but the growth in the fields of cell and gene therapy and RNA therapy may increase further.

In 2020, funds for early and late R&D will increase substantially, unaffected by COVID-19, and strategic transactions (from mergers and acquisitions to licensing and other forms of cooperation, usually between small and large companies) are related to a large number of COVID-19 Driven by the transaction, there was a significant increase.

The total R&D expenditure of the 15 companies with the highest pharmaceutical sales reached US$123 billion in 2020, exceeding 20% ​​of sales for the first time.

Venture capital entering the life sciences field has increased by 50% in 2020 compared to 2019, because the interest and valuation of early-stage companies have remained at historically high levels.

Oncology remains the largest area of ​​trading activity, consistent with its share of the entire pipeline.

Emerging biopharmaceutical companies account for 64% of the later production lines because more companies retain control of their innovation and development.

The proportion of products of companies headquartered in China in the early production lines has risen from 2% 10 years ago to 12%, while the share of European companies has dropped from 33% to 22%.

By 2020, the total number of new drugs approved globally has reached the highest level in history, reaching 66. The United States leads other countries for the third consecutive year and remains above 50 species.

In the United States, oncology, neurological and infectious diseases (including emergency-use authorized COVID-19 vaccines) accounted for 73% of the total new launches in 2020.

Among the approved new drugs, 31 are orphan drugs, 18 are first in class, and 26 are approved on the basis of the first or second phase clinical trials. 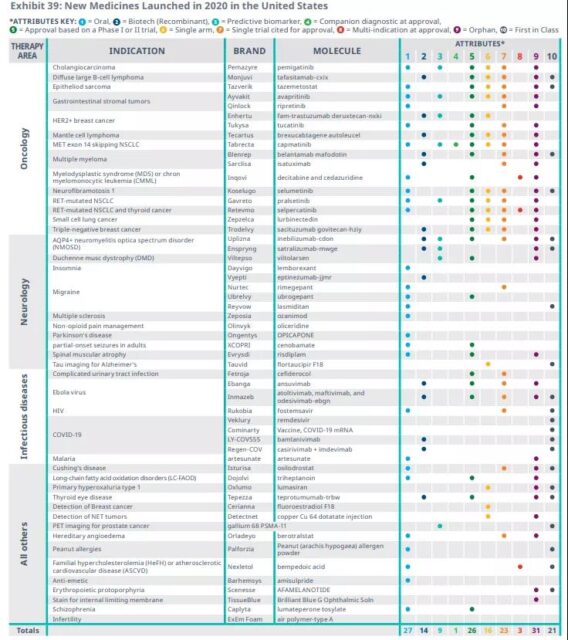 Emerging biopharmaceutical companies initiated and launched 40% of new drugs in 2020, slightly lower than the previous two years, but significantly higher than historical levels, because more companies remain independent through the development and launch of innovative drugs. 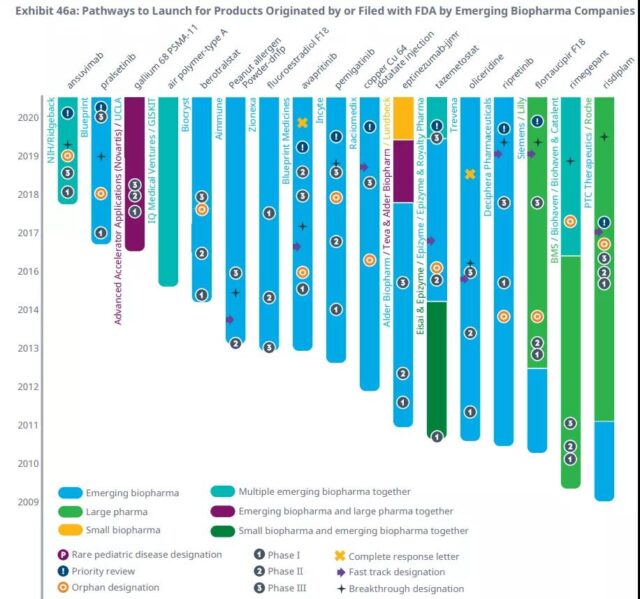